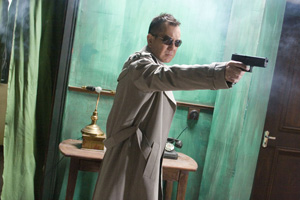 Johnnie To has taken over; his name is now synonymous with Hong Kong cinema. In the wake of Hong Kong’s return to China in 1997, the fate of its filmic output was as questionable as that of the city itself. Many popular directors fled to Hollywood. To stayed home and established his Milkyway Image production company. To re-forged Hong Kong cinema, usurping John Woo’s place as the Asian genre film maestro supreme. Think of the standard set by Woo—as well as the countless grind-house pictures churned out in Hong Kong during the ’80s and ’90s: intense, gritty, hyperbolic action films (with the gunplay choreographed as the industrial, urban equivalent of kung fu fights and swordplay). Add To’s sinister yet tongue-in-cheek, self-referential sensibility and you arrive at the current Hong Kong cinema paradigm: dark, pensive genre films that never lack a dose of transcendent profundity.

To’s latest, Exiled follows quick on the heels of his two Election films (among the darkest examination of gangster land in movies) marking To’s third stateside release this year. While Election and Triad Election are streetwise, naturalistic exposées of criminals with hearts as black as coal, Exiled is a return to the meta-mythical action film, a style To first scored with in 1993’s Heroic Trio (über-babes Maggie Chung, Anita Mui and Michelle Yeoh save a futuristic dystopia from the clutches of evil). Exiled is Leone and Peckinpah all the way. To’s protagonists are ill-fated anti-heroes traversing a moral wasteland. And considering that Kurosawa turned westerns into samurai pictures, which Leone turned back into westerns, Johnnie To keeps the postmodern action film Mobius strip going strong.

Five underworld assassins are pitted against each other. They grew up in the same gang but come into conflict after Wo tried to kill their evil boss Fay. Two of the former comrades-in-arms set out with orders from Fay to kill Wo while the remaining two intend to protect him. In the middle of it all is Wo’s wife and their newborn son. It’s the classic existential dilemma derived from the ancient Chinese concept of Yi—the code of brotherhood and honor so integral to both wu xia (chivalry and swordplay) fiction and Chinese gangster culture. Accordingly, the dramatic interplay of the ‘brothers’ takes precedence over the hyper-stylized action. This works to the film’s advantage, saving it from the status of self-parody or generic action potboiler. To is quite playful with the expectations established by previous Hong Kong action films. One brilliant moment has our antiheroes mock a bungling policeman by shooting beer cans so they bounce all around him. Their precision marksmanship marks their superman status in a world where crime rules. They are bound only by their own code, while the cop nervously awaits the respite of his imminent retirement.

Exiled is a follow-up to To’s The Mission (1999) and features the great ensemble cast. Making a scene-stealing star turn is the iconic character actor Anthony Wong as Blaze. Wong skillfully juggles between rugged everymen and creepy lowlifes, somewhere between Anthony Perkins (in Crimes of Passion or Edge of Sanity) and Warren Oates (in Bring Me the Head of Alfredo Garcia). Wong starred in the spine-chilling Untold Story (1993), based on a true story of a serial killer who turned his victims into steamed pork buns. Equally recognizable is Simon Yam as the thoroughly vicious Fay. Yam was born to play bad guys, looking like a natural pimp/mobster/sleazy no-good lothario. While Yam toned down his sinister villain against Tony Leung’s histrionic scumbag in Election, here he is appropriately, over-the-top megalomaniacal.

The film literate (i.e. movie geeks) will suss right away what To’s up to in the opening sequence. The deliberate pacing, long meditative shots and slow narrative buildup of men in wait for another man—the target of their questionable intentions—sets a compelling yet familiar cadence and tone. It’s a tip of the hat to the opening of Once Upon a Time in the West. Savvy to the reference or not, To draws you in, yet to his credit the pastiche is not simply imitation. To’s great conceit: We’re in Macau, that unusually European part of Asia. The mise-en-scène throughout has a striking, painterly feel—you can imagine production meetings spent examining the work of Goya and his contemporaries.

Setting the film in 1998, right before the Portuguese returned Macau to the Chinese, allows the film’s thematic concerns to have a fascinating, symbiotic relation ship, a complex of Mobius strips if you will. The universe of Exiled is a barely contained underworld, always on the brink of chaos, not unlike a Mexican border town straight out of a spaghetti western or Peckinpah’s The Wild Bunch. As a sort of Asian picaresque with a background of Portuguese baroque architecture, Exiled paints a romantic idyll. Yet with its abundant gunplay and a fervent, nail biting intensity it becomes decidedly apocalyptic. Exiled is elegiac; a lament for the drastic changes that Macau and Hong Kong, has gone through in recent years. A key sequence of the film finds our roguish crew in a purgatory-like desert region—an embedded metaphor not only for the fate of Macau but for the avarice and folly of the changing society. Yet there is an almost celebratory feel to the film as well. The five friends’ mutual loyalty cements a morality that gives meaning to their existence. They are further defined by the contrast between their quiet, cool demeanor and the cathartic defiance of sudden gunfire and ultraviolence. Without a doubt, badassitude still rules Hong Kong films.

To’s recurring theme of fatalism proves to be one of the most distinct traits of his style and defines the direction he’s taken Hong Kong films. The characters decide their own fate with the flip of a coin. A fork in the road evokes the idea of the lady or the tiger; yet no matter which path they choose, the moral universe of Exiled is so noir that even they know they’re headed towards their own doom. Like The Wild Bunch before them, they intend to go down in a blaze of glory.

The Sea of Tranquility (Mare Tranquillitatis) is a lunar mare that sits in the Tranquillitatis basin on the moon. It’s the first off-world place ever visited by human beings. On July 20, 1969, Neil Armstrong and Buzz Aldrin left footprints there. It’s also the location of the first moon colony in Emily St. John Mandel’s new novel.

For over fifty years John Divola has made photographs which live in the conventional boundary separating the photograph’s function as a document of fact and a producer of fictions. In countless series, the majority of them site-specific, Divola intervenes into the found conditions of his environment, adding both text and graphic elements which provide subtle accents and, in some cases, completely transform the atmosphere of a space.

John Willenbecher: Works from the 1960s

John Willenbecher’s work is an art of anticipation. His precise forms anticipate the seriousness of Minimalism, while his paradoxically playful objects beg to be handled, a quashed call to participation impossibly choreographed behind glass.