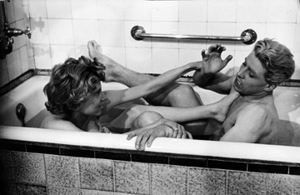 Realism and fantasy collide in Les Enfants Terribles, the 1950 collaboration between celebrated directors Jean Cocteau and Jean Pierre Melville. Cocteau adapted the film from his successful 1929 novel which he wrote in a week-long haze of opium withdrawal. He commissioned Jean-Pierre Melville to direct after seeing Melville’s directorial debut, La Silence de La Mer. They’re an unlikely pair. Cocteau was known in literary circles as the “frivolous prince” for his willowy line drawings, poetry, and romantic, navel-gazing films featuring a high beef-cake factor. Melville became famous for his war pictures and hard-boiled Zen noirs.

The result is like Bertolucci’s The Dreamers with no sex. Equal parts Romeo and Juliet and Sunset Boulevard, with a dash of Cocteau’s roguish melancholia thrown in. The lush camera work and cornucopia of quotations from other films is thoroughly proto-New Wave. It’s no surprise that Bertolucci’s vampirish send-up to the genre borrowed so heavily from the film. What’s surprising is how boring Enfants (like Dreamers ) can be.

Les Enfants Terribles is the story of Paul (Edouard Dermithe) and Elisabeth (Nicole Stéphane), a brother and sister who retreat into a private fantasy world after Paul is struck in the chest with a snow-ball. Paul‘s weak heart requires constant supervision and Elisabeth willingly plays the role of psycho-sadistic nurse. They spend most of their time in their bedroom awash in old books, magazines, night creams and cray-fish. When their hermetic circle expands to include Gerard and Agathe—two hopelessly sweet, bourgeois saps—Elisabeth happily extends her passive-aggressive needling to them as well.

Melville and Cocteau have different agendas, so its difficult to imagine them collaborating. The meaning of a Cocteau film is usually generated through flights of fancy. The result is either poetically moving or downright silly. The magic and perversity of Cocteau’s book seems cartoonish when subjected to Melville’s realism. In Melville’s defense, the screenplay so thoroughly obscures the book’s meaning that it’s surprising the author adapted it himself. The fantastical element so essential to feeling the story is consistently present only in Cocteau’s lilting narration, and Melville’s astute choice of Bach and Vivaldi for the score.

This Criterion release has a load of special features including interviews with actress Nicole Stéphane and other crew members and a short film about Cocteau and Melville’s collaboration. Despite it’s imperfections, Les Enfants Terribles is a worthy rental for Cocteau lovers and serious students of the Nouvelle Vague.

The Once and Future Queen: Amber Sparks's Weird Realism

Amber Sparks’s third story collection And I Do Not Forgive You: Stories and Other Revenges is, as the title suggests, teeming with tales of retribution, though reducing the book or even its concept to that of a glorified burn book would be way off the mark. Desire, anger, murder, madness, robots, gods, monsters, apocalypses, love, hate, violence, magic, fairy godmothers, women as heroes, and men behaving badly (badly-behaved men who often pay with their lives, or hearts, or souls for said bad behavior): all these things live within this book’s pages.

by Haldór Laxness, translated from the Icelandic by Philip Roughton

American estimations of Halldór Laxness, winner of the 1955 Nobel Prize for Literature, typically come down to impressions of Independent People. Fifteen years ago, I traversed Iceland on foot with little knowledge of the country but what I had gleaned from that book and a few other Laxness novels. A week into my hike, I came across a sheep farm and asked the farmer if I could camp in a pasture. He invited me inside for coffee and, seeing as how Laxness’s masterpiece Independent People is set on a sheep farm, I casually dropped that it was one of my favorite novels. The farmer replied, “The one that came before it is even better.” I wrote down the title, Salka Valka, and repeated it in my head for the next month as an incantation, a hocus pocus to make the valley floor solid or the next day’s water near. Unfortunately, I could never actually read the farmer’s favorite until now. This month Archipelago Books publishes this masterwork of social realism. Salka Valka initiates a debate on whether independence is not solely a virtue, but a failure of community—a theme central to Laxness’s subsequent work. The depth of feeling in the scene excerpted here, I think, brilliantly proves the sheep farmer’s point: Salka Valka is a major novel.