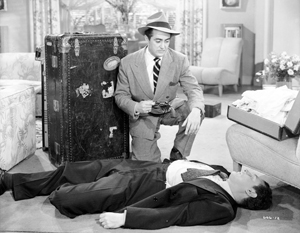 While Esther Williams was swimming laps in kaleidoscopic aquatic-musicals, another side of Hollywood was exploring equally kaleidoscopic visions of the world: darker, more cynical, and decidedly monochromatic. The headline of a French review of Double Indemnity, Murder My Sweet, and The Lost Weekend published in 1946 provided an apt terminology: “Les Américans aussi font des Films Noirs.” Translated, “The Americans also make film noirs.”

Never actually a concrete genre, film noir is mood or style whose classical period permeated American cinema from the early 1940s through the end of the 1950s. Though certainly not limited to that time frame, earlier and contemporary examples of noir abound, and its aesthetics continually evolve through osmosis. Noir’s multi-faceted, at times schizophrenic, personality and wide-ranging influences are appropriately displayed in the recently released Film Noir Classic Collection: Vol. 4, a collection of ten films spread out over five DVDs and offering all-things noir (Decoy, 1946; Act of Violence and They Live By Night, 1948; The Big Steal, 1949; Mystery Street, Side Street, Tension, and Where Danger Lives, 1950; Crime Wave, 1954; and Illegal, 1955).

Made between 1946 and 1955, these films encapsulate noir style—a mixture of poetic sensibilities (They Live By Night), hardboiled wonderlands (Crime Wave) and lurid pulpiness (Tension). (Elements of science-fiction work their way into Decoy, with its Frankenstein-inspired reincarnation of a bank robber who has already been executed.) The many faces of noir stem from an array of cinematic predecessors, most notably the high-contrast, chiaroscuro lighting of 1920s German Expressionism, sympathetic criminals from socially-conscious American gangster films of the 1930s, and documentary-realism from 1940s Italian Neorealism. The latter’s preference for location shooting (due largely to post-WWII economic constraints) became a key distinction between glossier studio-based films and more gritty films. Examples include the LA-based Crime Wave and the NYC-based Side Street.

Noir refuses to discriminate between high- and low-brow films; often the two are inverted. A seemingly trashy B-Movie (the bottom-half of a double bill) may prove more artistic and compelling than a prestigious, big budget A-Movie (the main attraction). Where Danger Falls begins as a staid melodrama about a surgeon (Robert Mitchum) who abandons his conventional relationship with a nurse (Margaret O’Sullivan) for a mysterious patient (Faith Domergue). His new love leads him to murder, a life on the lam, and his own ruin. A penultimate confrontation between Mitchum and Domergue in a seedy hotel near the Mexican border offers seven minutes of tension, emotional breakdowns, and—that staple of noir protagonists—the realization that ones own desires bear the seeds of destruction. The entire scene, captured in a continuous shot by director John Farrow and cinematographer Nicholas Musuraca, is an essay in visual counterpoint. Mirrors and pulsating neon lights reveal layers of deception and delusion. The subsequent shot, a low-angle 360-degree pan of Mitchum falling down a staircase analogizes the middle-class man’s’ fall from grace, a prominent archetypes in noir.

Lewis Allen’s Illegal also follows the corruption of a middle-class figure, in this case the big-city District Attorney Victor Scott (Edward G. Robinson), whose career takes a nose-dive after he discovers a man he sentenced to the electric chair is in fact innocent. When responding to a reporter’s wish for an interview in order to “humanize him,” Robinson responds, “Well, I’ve been too busy to be human,” which is as noir an epithet as you can get come. To acknowledge the acceptance of one’s own inhumanity is typically the denouement of a story; in Illegal, it becomes the impetus for Robinson’s own corruption.

The real value of this set lies beyond the worth of any individual film (Mystery Street, while fascinating, is uneven and dated) but in the reviving of such obscure curiosities alongside long out-of-print classics such as Nicholas Ray’s debut They Live By Night. Film noir was as much the creation of artists as it was hacks, of youthful innovation (Ray) and experienced craftsmanship (Andre de Toth, director of Crime Wave), and it is befitting that this box-set celebrates the union of such a cinematic myriad.

CULLEN GALLAGHER is a freelance critic and curator who lives in Brooklyn.