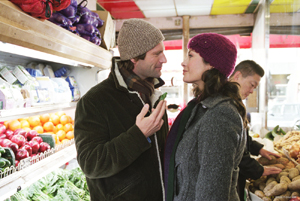 Seperate but equal: Aaron Eckhardt and Catherine Zeta-Jones in No Reservations

Viewed together, this summer’s romantic comedies show a peculiar obsession with the intersection of romantic love and family loyalty. With heroines navigating between their own interests and those of their kin, three prominent offerings betray a cultural anxiety about how to be a responsible adult woman in love.

Becoming Jane is a historically and biographically inspired look at Jane Austen’s scandalous early life starring the perpetually affected Anne Hathaway; No Reservations, is a remake of the German 2001 film Mostly Martha, where a bitch on wheels corporate culture chef unexpectedly inherits a child (Catharine Zeta Jones is suitably cast as the B.O.W. in the remake); 2 Days in Paris is Julie Delpy’s Woody Allen-inspired directorial debut, an autobiographical ode to her own quirkiness and the apparent legion of men who can’t resist it.

Becoming Jane is an obvious venue in which to examine the encroachment of family on romance. Austen’s novels teem with resentment at the high concessions demanded from women in her society, and the excessive self-involvement which led many to reject those demands at their family’s expense. Rather than draw any meaningful connections between these societal forces and our day, Becoming Jane invents from whole cloth a scandal in which Austen nearly absconds with all ill-advised love interest. In the end she neither marries nor consummates her love. She instead converts a lifetime of sexual frustration into England’s greatest novels.

The treatment belittles Austen. Becoming Jane is a mash-up of Austen’s most memorable lines, delivered in a Rocky Horror Picture Show fashion. The audience is intended to anticipate every flirtatious quip, and the most in tune chant their favorite lines along with the actors. But the words are perverted. Austen’s stinging cultural commentary is delivered as intructives to a young Hathaway. She absorbs them pie-eyed from the mouths of men, like Moses receiving the Ten Commandments. In service of a character purported to be herself, Austen gets downgraded from literary genius to capable stenographer. Worse still, she’s a ditz. The film shows Austen step back from her destructive passion only when she is told that a family will starve to death if she acts carelessly. This mirrors the plot twists the writer favored, but when played out in a narrative bounded by our conventions, Austen’s near self-destruction is not cute, it’s inexcusable. Austen’s no longer a dispassionate observer of human vices whose happy endings we can look to for hope that treading lightly on the spirits of those around us and respecting our integrity will pay off in the end. Now she’s a tragic diva—one we turn to when we want to feel righteous because we managed not to fuck over everyone who depends on us. It’s a shame that the film takes this shrill tone, because the real Austen’s balancing act between love and family has real value for today. Though the founding fathers outlawed the entailing of estates, nowhere does our constitution protect our parents against home foreclosure. The advent of a post-pension era will find more women needing to act against their own instincts, motivated by the needs of their dependant parents.

Becoming Jane reacts with terror to this realization that family still constrains, which makes it all the more a welcome surprise that No Reservations treats these realities with such candor. In No Reservations, Jones’ character is forced to take on guardianship of her 10-year-old niece (Little Miss Sunshine’s Abigail Breslin) after her sister’s death. The premise is stale, but the authenticity of the family dynamics saves the film. Jones falls at the intersection of Keri Russell in Waitress and Diane Keaton in Baby Boom. If C.P. Snow’s notion of the two cultures can be applied to food, then Russell is the humanities to Jones’ science. In Waitress Russell, suffering through an unwanted pregnancy with an abusive husband and the pressures of poverty, creates pies to suit and unload her mood. The winning and unexpected charm of Waitress was watching Russell find strength and independence by baking while barefoot and pregnant. The film played the stereotypes deadpan enough to effectively subvert them. Likewise, Jones, who sublimates her isolation and trust issues with the precision based science of cooking, defies the expectation that for women cooking equals nurturing. It’s unnerving to see a woman enact her Freudian rage by running the best restaurant in New York. Jones experiences her mother’s early death and her father’s abandonment through cooking, and when faced with a girl in her care, recreates her childhood scenario by cooking herself. That Jones corrects for this without disavowing her analytical, exacting approach to life recommends No Reservations.

There are no grand revelations here, which is a comfort. Everyone tries their best from the beginning. Jones rejects the advances of her neighbor, a fine suitor, in the usual fashion, and he continues to help her be a better mother. Jones accepts the advances of her sous chef (Aaron Eckhardt), an equally fine suitor, and after finding love continues to be bossy and demanding. Ekhardt seems to like it. He forms a kinship with Abigail Breslin cemented on taking amusement from Jones’ ball-busting. The ice-queen tolerates their teasing but being mocked doesn’t make Jones’ any warmer.

In the final scene, where so many films drown in their own treacle, we see the new family pour syrup. They are together, but Jones has not been forced to trade her fast-paced kitchen for a slower life. Jones instead shares her kitchen with Eckhardt by splitting it down the middle, Brady Bunch style. Rather than incorporating Eckhardt into her world, Jones’ vision of love is to view him as equal. Love means giving him the respect she also demands for herself.

Julie Delpy also envisions love as respect. Respect for her, whether she earns it or not. The film is a low key, semi-autobiographical piece, and if nothing else, it turns Woody Allen on his head. Delpy’s wandering exploration of a bickering Franco-American couple testing their love while visiting her parents, stars herself and her real-life ex-boyfriend, Adam Goldberg. Lest the audience miss that trivia, all her interviews have pressed the point home. The ethereal blonde French shiksa Julie Delpy actually slept with Adam Goldberg (The Hebrew Hammer). The film spends a good deal of time laughing at Goldberg’s hypochondriac foibles, but she, the goyishe goddess, is presented as the genuine neurotic. Further lifting from the Allen playbook, Delpy treats her own neurosis as issues of universal importance. It’s a clever and ambitious ruse but the film falls short of Allen’s mark. Where Allen’s best work always focused on himself, Delpy presents the person she aspires to be. Rather than acknowledge that she is an actress known primarily for her beauty, she treats all of her sophomoric insights as profound. What resonates from the film is that childishness is not a function of age, but of place. Delpy is able to continue to be flighty and unpleasant because—despite a good job, financial stability, a loving family and a solid relationship—she envisions herself solely as a dependant. She is not a provider for herself, or anyone else.

Delpy brings Goldberg to France to meet her parents, the final arbiters of whom she should love. In the most agonizing moment of the film, Delpy and Goldberg attempt sex. Her mother comes in many times to ask after their laundry. Goldberg plays well his character’s discomfort and attempts to be sensitive. The situation is infantilizing but Delpy interprets Goldberg’s loss of desire as a bourgeois hang-up. In her finest moments in the film, she attacks all demands of life as bourgeois hang-ups. Delpy’s character shows a wildness rarely brought to the screen as she outs pedophiles and agitates racists. Her instincts are morally honorable, but her disregard for the people around her and herself is cruel. She’s intended as an alluring character, but it’s impossible to like her.

In the film’s dénouement she channels High Fidelity, explaining that eventually you get too tired to break up and thus come to depend on someone. This defeat, to her, is growing up. But Delpy has it backwards, and this inversion dooms Two Days In Paris. There’s nothing grown up about realizing you depend on people. Babies cry when left alone because they know exactly how dependant they are. Adulthood is the place where you’re strong enough for people to depend on you. For all its wit, and knowing anti-establishment perspective, Two Days In Paris offers little advice. Which evokes one more harsh truth of the world; being clever rarely helps.

Love, loss, pain, desire, hope: these are the strongest emotions that we know. Throughout life, one or more is our constant companion. When the Venetian Renaissance painter Titian (ca. 1490–1576) received his greatest commission in 1550 from Philip II, the future King of Spain (r. 1556–1598), he was clearly involved in thinking through the resulting human problems.

Under the voluminous skirts of the effusively praised Jasper Johns retrospective on the fifth floor of the Whitney Museum of American Art, on the level usually reserved for educational programming, is a show of 30-or-so small works of art by women.