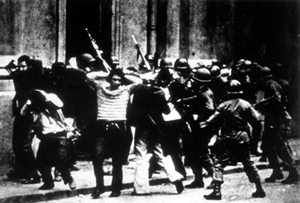 The Battle of Chile begins with the beginning of the end. Dense clouds of smoke billow from the windows of a large, classical building to the sound of explosions. The black-and-white image wavers, betraying an ass-risking cameraman’s proximity to the violence. The proceedings speak for themselves. Soon, an authoritative male voiceover presents the facts. Santiago de Chile, September 1973: La Moneda, the country’s presidential palace, has been violently seized by right-wing forces opposed to Salvador Allende’s democratically elected socialist government.

Focusing on the six months prior to this watershed incident, Patricio Guzmán’s epic documentary rigorously chronicles the “before” of the historic coup d’etat. Its aftermath would find the eerily un-charismatic Augusto Pinochet an uncontested dictator. Moving at warp speed through the spaces of a society rocked by the birth pangs of socialism, compañero Guzmán’s camera alights on mass demonstrations, congressional hearings, presidential addresses, union meetings, televised debates, military offensives and, most powerfully, Chilean civilians. Those favored by Guzmán and his left-leaning crew, those detested, and even those who claim no opinion to relate, have their say. As a result, The Battle of Chile avoids facile narrative (read: oppressor vs. oppressed). The film functions as a testament to the contradictory process of revolution.

During Part I, subtitled “The Insurrection of the Bourgeoisie,” Guzmán’s team roams the chaotic streets of Santiago on the day of the decisive congressional election of March 1973. Carrying out a haphazard opinion poll that doubles as a series of character portraits, an interviewer confronts auto drivers, street vendors, and congregating voters with a microphone, asking all, “Who do you think will win?” and “What do you think of today’s election?” The camera lingers on the faces of respondents before scanning their bodies for the newspaper tucked under the arm, the slogan-bearing pin —these are the key trappings of political affiliation. After a battery of Allende supporters maintain that the “Popular Unity” party is going to win, the focus shifts to supporters of the opposition. A female voice is heard off-screen, shouting, “They should impeach the President!” Swinging around to catch the outburst, the camera captures a shrieking thin blond woman in cat’s-eye sunglasses:, “All those dirty communists should get out of Chile!” The insertion of this hysterical bourgeois into a diplomatic exchange between left and right prefigures the community’s violent dissolution.

Tensions escalate after the left’s unexpected electoral win later that night, and the remainder of Part I and Part II (“The Coup d’Etat”) showcase with Guzman’s primary visual signature: the sequence shot. His technique combines long takes with sophisticated camera movements. Events unfold uncut and uninterrupted until the film runs out. One salient instance depicts a massive stadium packed with striking copper miners. The camera moves from the union leaders’ podium to the crowd cheering opposite, arcing through the sky to snag some tree branches in the process. Here, a real-time engagement with history prompts poetry. Unbidden, nature distracts from politics, and Guzmán retains the diversion—two worlds inhabit a single shot.

Born in Santiago in 1941, Guzmán left Chile in young adulthood to study directing at Madrid’s Escuela Oficial de Cinematografia. In 1970 he returned home “determined to work on a fiction film.” Guzmán found a “climate of euphoria” stimulated by Allende’s election to office. Rather than proceed with ideas conceived elsewhere, the budding director began to document the daily transformations of his homeland. A témoignage (testimony) entitled The First Year (1971), recorded the earliest stage of Allende’s presidency. The Battle of Chile occupied Guzmán between 1973 and 1979. The full 270-minute trilogy was shot in 1973, with a crew of five, a couple of lights, one 16-millimeter Eclair camera and one Nagra tape recorder.

Guzmán’s artistic milieu included Cuban filmmaker Julio García Espinosa and legend Chris Marker, who furnished Guzman with film stock. Marker’s anti-imperialist stance and interest in pushing the limits of documentary—his acclaimed Sans Soleil would be released after Guzmán finished Part III of The Battle of Chile—made him an ideal advocate for the young artist. Marker supported Guzmán post-coup, during Guzman’s imprisonment and exile from Chile. Marker is credited a co-producer of the film. García Espinosa—an active member of the Instituto Cubano de Arte e Industria Cinematográficos in Havana where Guzmán edited the films—remains a presiding deity of revolutionary Latin American cinema. In 1969, Espinosa authored a manifesto entitled “For an Imperfect Cinema,” calling for a “committed” cinema inextricable from day-to-day struggle. “Imperfect cinema,” he wrote, “is no longer interested in quality or technique. It can be created equally well with a Mitchell or with an 8mm camera, in a studio or in a guerilla camp in the middle of the Ã¢â¬Â¨jungle.”

Engaged with an “imperfect” reality, Guzmán rejected the artificiality of coherence. The Battle of Chile is a rough-edged, open narrative. While Guzmán uses cinema verité and reportage devices to illustrate a unique historical episode, his film avoids strict linearity. History is often repeated, reviewed, and re-ordered. Part III (“The Power of the People”) for example, returns to the period before the coup to concentrate on community organizing techniques developed during that time. The takeover of La Moneda thus represents a beginning, an end, and something in between. Guzmán’s later projects visualize the “after” of the coup, but Part III’s reexamination of “popular power” following its apparent demise gestures towards its future potential.

Sometimes criticized, the film’s Marxist voiceover does little to render The Battle of Chile one-dimensional or propagandistic. At worst, it’s a minor annoyance that fails to distract from Guzmán’s spectacular imagery; at best, it contextualizes the happenings onscreen. Thankfully, the narrator seems to know when to shut up. Guzmán’s strongest depictions, like the bombing of La Moneda, are commentary-free. A lyrical voiceless sequence in Part III portrays a worker running through the street, bearing the burden of a loaded horse’s cart with his hands. The man’s fluid grace counters the obviousness of his struggle—his feet barely touch the ground. Shot in slow motion and layered with a light flute score, this image of weighted weightlessness evokes García Espinosa’s statement that “Imperfect cinema can enjoy itself despite everything that conspires to negate enjoyment.”

Equal parts pleasure and profound disturbance, The Battle of Chile demonstrates the inextricability of the two. In Part II, the contagious enthusiasm of Chile’s working class is increasingly tempered by images of civilian violence, fascist gang activity, military suppression, and even the chilling point-and-shoot death of a cameraman in the act of filming. When Pinochet and his U.S.-financed cohorts broadcast their victory from La Moneda, the archaic flicker of a television screen underscores the transmission’s one-way character. Text soon appears, however, carrying an inspiring postmortem message from Allende: “History is ours, and it is made by the people.”

Sarah Kessler is currently completing her Master's in English at the University of Wisconsin. She will migrate to sunny Los Angeles after her defense.

Barbara Takenaga and Patricio Guzmán: telescopes and other visions

The buzz about Barbara Takenaga’s recent show, Outset at DC Moore Gallery, had already reached me by the time I got back from my summer on the Great Plains and was standing in front of her lush new paintings.

The US government and the Bolivian putschists continue to describe this coup as a win for “democracy.” Disturbingly, this same claim is echoed in Mexico by political conservatives and the economic elite. Not only are they supportive of the coup, some are calling for similar violence against Mexico’s own center-left President, Andrés Manuel López Obrador.

Subterranean Cinema: A Return to the Geo-Imaginaries of the Hollow Earth

We are in desperate search of spaces that offer us greater degrees of darkness—be that the cinema or underground caverns or possibly the greater cosmos. These alter-territories hold the promise of maximum separation from the 7.5 billion other people on the planet. In gravitating toward sites of absence, specifically the mine, the cave, the hole, where cameras are insufficient tools of capture (if not rendered entirely useless), film artists have found overlapping themes that go beyond traditional ecological concerns of diminishing resources and compromised landscapes.