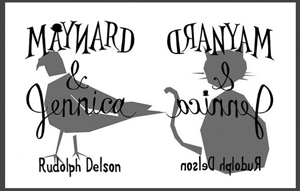 Right before turning thirty, Rudolph Delson left law to compose and complete his first novel Maynard and Jennica which, like its author, proved to be ambitious.

The author has employed 35 characters to submit first person accounts of intimate and tangential relationships to Maynard and Jennica’s romantic arc. The varied perspectives draw a complex and subtle portrait; not only of Maynard and Jennica themselves, but of the people who populate their world, of West and East coast cultures, and of Manhattan and its fresh tragedy, September 11th.

Delson has written what could have easily been a romantic tale—nearly chick lit—between the titular characters. Instead, Maynard and Jennica is a satisfying character study, a story whose charms are well-earned and surprisingly fresh.

Yael Korman (Rail): Why was it important that 35 narrators tell Maynard and Jennica’s story?

Rudolph Delson: There is a theatricality to having so many narrators; motives and counter-motives multiply pleasingly the more characters are allowed to speak, and that density of human scheming is invigorating to work with. People always talk about the character as being the basic unit of the novel—as if the character were to the novel as the atom is to chemistry—but really novels ought to be about families, and in fact, Maynard and Jennica is really just the story of three or four families colliding, the Gogarties, the Greens, the Hanamotos, the Kaganovas.

Rail: How much did this structure change your writing process?

Delson: I’ve never given too much thought to my “writing process,” which basically consists of sitting barefoot in front of my laptop, one foot folded over the other knee, picking at my calluses. Apparently stories like Maynard and Jennica—stories in which everyone gets their say—are indigenous to this callus-picking way of writing, because I’ve been writing them for ten or twelve years now.

Though actually, I’m not convinced that the number of narrators is anything unusual. The book doesn’t do anything that isn’t anticipated by Chaucer, or Günter Grass, or Roberto Bolaño. Which is not to say that Chaucer or Grass or Bolaño were important influences for me or are apt comparisons, but only that I never felt that I was attempting the impossible.

Rail: A clever structure can turn into a gimmick. How did you counterbalance the eccentric weight of this structure?

Delson: I can only hope that the different narrators make the story funnier and more suspenseful. For example, there’s a vibrancy in hearing about California not just from Jennica, who is quite romantic and nostalgic, but from her wry and pragmatic parents Susan and Mitchell, and from her sarcastic friend Nadine Hanamoto, and from hyper-analytical brother Gabriel, and so on. In other words, I hope the number of narrators in Maynard and Jennica needs no counterbalancing.

Rail: What are the challenges of writing comedic fiction? The Park Slope Reader compared you to P.G. Wodehouse. Thoughts?

Delson: Um. Have you heard about the Jesus Christ diet? You get to eat as much as you want, but you’re only allowed to serve yourself one loaf and one fish.

Rail: Were you worried about writing September 11th into a comedy?

Delson: I would have been more worried about writing it into a tragedy

Rail: Did you always know you wanted September 11th to play a role in this story?

Delson: I began writing the first sketches for Maynard and Jennica in the spring of 2001. At that point it was a book exclusively about Maynard, and I was calling it The Misanthrope. I was casting around for things to insult Maynard’s dignity, ways to make him suffer aesthetically for the tastelessness of others. So, for example, this was the summer that I invented the Puppy Jones subplot—in which Maynard’s piano sonata gets sampled for use in a hip-hop anthem.

It took me a few weeks after September 11th, but once I comprehended just how trite and saccharine America wanted to be about September 11th—and how ruthless—from that point on, I knew I would use it.

Rail: Have you paid attention to the critical response to 9/11 fiction?

Delson: I haven’t sought it out, but I do read whatever reviews show up in the Times. From what I have read there isn’t even agreement about which books should be included in “9/11 fiction” to begin with—much less any uniform response to those books.

But such criticism is somewhat moot anyway. The most important piece of fiction concerning September 11th that will ever be authored came out back in 2003, to rave reviews and wide commercial success—you know, The War in Iraq by President George W. Bush.

Rail: You spent 1998 working on a novel in Berlin. You subsidized your stay by selling subscriptions to letters that detailed your youthful, avante garde (your words) adventures in Europe, mostly sexual and embarrassing in nature. Eventually the letters became fictitious. How do you think this creative endeavor informed the project you were working on? Was it draining or supportive to your process?

Delson: Suffice it to say that during 1998 and 1999 my letters got written and my novel did not. The pressure of having to write something entertaining—10,000 words long, every two weeks—was very good for me. Though I experimented, and by the end of that year, many of the letters were written in the voices of my friends in Berlin. The letters stopped being non-fictional accounts of my life, and became fictionalized accounts of the lives of my friends. Which goes back to your question earlier about process; the multiplicity of narrators wasn’t something I invented for Maynard and Jennica.

(Did I really ever describe myself somewhere as “avante garde”? Without irony?)

Rail: What is it with lawyers and fiction writers? And, vice-versa?

Delson: They have so little in common, literature and the law. Most obviously: A good novel tells a tale never before heard, and leaves its reader bewildered and amazed; a well-written legal brief is one that cites a precedent for every claim, and that swiftly convinces a judge that the case at hand is just like the one that received a favorable ruling from the judge last week.

Still, no one ever wonders about a fiction writer who makes ends meet by becoming, say, a web designer. Or by working as an English teacher, or by freelancing as a journalist, or by marrying a millionaire. But let a writer go to law school—however obvious a way it is to provide for oneself and one’s family while one writes—the question trails forever after.

Andrea Abi-Karam is a trans, arab-american punk poet-performer cyborg. They are the author of EXTRATRANSMISSION (Kelsey Street Press, 2019), Villainy (Nightboat Books, September 2021), and with Kay Gabriel, they co-edited We Want It All: An Anthology of Radical Trans Poetics (Nightboat Books, 2020).

John Latta is the author of Rubbing Torsos (Ithaca House, 1979) and Breeze (U. of Notre Dame Press, 2003). Between 2006 and 2015 he regularly put together notes and quotes for a blog called Isola di Rifiuti. He lives in Ann Arbor, Michigan.