Daniel J. Levitin, This Is Your Brain On Music: The Science of a Human Obsession (Plume, 2007) 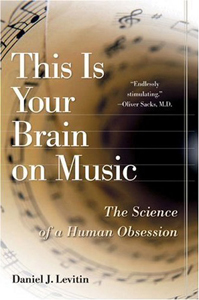 What is music for? If most pleasurable activities have an evolutionary basis, then the joy we find in both violin concertos and Kelly Clarkson anthems must be rooted in a practical purpose. According to Daniel J. Levitin, music may serve us by attracting potential mates, providing opportunities for social bonding, and helping children to learn the rules of language. (For evidence of that first theory, one need look no further than to thousands of skinny high-school boys cradling the delicate curves of their first guitars.) In This Is Your Brain on Music: The Science of a Human Obsession, Levitin explores the symbiotic relationship between music and the mind with the enthusiasm of an awestruck post-doc groupie.

Levitin, a musician and record producer turned cognitive scientist, understands that both musical and neurological terminology require some explanation at the outset. He provides definitions and examples of nebulous concepts like timbre, pitch, and the neocerebellum without condescending to the reader. Neuron connections are illustrated with an analogy to a network of friends on a telephone line, and Levitin chooses well-known songs to support his explanations of musical terms.

Each chapter of This Is Your Brain addresses a different aspect of the connections between the brain and music: music and memory, musical talent, and, somewhat bizarrely, a chapter entitled “After Dessert, Crick Was Still Four Seats Away From Me,” which is entirely held together by Levitin’s admiration for the Nobel prize-winner. In attempting to make the book accessible, Levitin occasionally errs too much on the side of the personal: we hear about his dinners with Joni Mitchell and Paul Simon, his disbelief when he is invited to a star-studded academic conference. Still, Levitin’s investment in the material propels the book forward.

Levitin is at his best when the topic allows him to delve into the particulars of music. “My Favorite Things” explores the question of why we like the music we do. Levitin explains that although our taste in music varies in accordance with temperament, what we are exposed to in our teenage years—when our minds are most open to new experiences and most likely to forge emotional connections with those experiences—often dictates our lifelong preferences. Many parents in the ’50s may not have been able to understand rock and roll because their minds were closed to that kind of music, just as hip-hop later baffled some flower children.

At times, Levitin himself comes across as a kind of neurological Austin Powers, tossing out dated references with confident sincerity. His litany of popular musicians, “the Grateful Dead, the Dave Matthews Band, Phish, Neil Young, Joni Mitchell, the Beatles, R.E.M., Ani DiFranco,” places his catalogue of musical references in the mid-nineties at the latest. Elsewhere, he becomes a modern-day Carnac the Magnificent, predicting that with the ascendance of Internet radio, “we will be seeing personalized music stations in the next few years, in which everyone can have his or her own personal radio station, controlled by computer algorithms that play us a mixture of music we already know and like and a mixture of music we don’t know but we are likely to enjoy.” Daniel Levitin, meet Last.fm.

This Is Your Brain on Music is more light reading for those interested in music than an incisive scientific treatise. Nonetheless, it’s a worthy companion to the works of popular science writers like Oliver Sacks and Stephen Jay Gould. Levitin makes a knowledgeable if easily distracted guide, like an eager professor who occasionally drops his notes. Along the way, he supplies an endless stream of fascinating cognitive studies and musical trivia, including an experiment that proves year-old babies can remember the music they hear in the womb, and another that proves owls capable of firing neurons to the frequency of Strauss’s “Blue Danube Waltz.” Who knew?

Sarah Todd is a writer based in Brooklyn

Artists and critics on the vanguard these days are suppose to be past the idea of genres, other than to set them up like bowling pins to be scattered by the force and momentum of insight and truth.