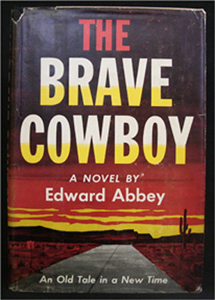 A cowboy hero, lost in the modern world of the 1950s, turns outlaw and escapes a massive, high-tech posse only to be flattened by a tractor trailer hauling toilets, emblazoned with the nihilistic slogan “America Builds For . . .” Those ellipses, and the story to which they belong, encompass much of the philosophy of Edward Abbey, the cantankerous, contrarian anarchist—a redneck with a PhD in philosophy and a penchant for classical music—who famously called economic growth for its own sake the “ideology of the cancer cell.” Though he is best known for his incisive essays and powerful literary persona, Abbey considered himself a novelist first and foremost. He viewed the central dilemma of modern society as the conflict of “humans versus human institutions,” a subtle dialectic well-suited to fiction. Abbey wrote five novels of ideas, all of which romp along the edge of the civilized world.

Unlike his contemporary Jack Kerouac, whose On the Road turned fifty this August, Abbey gets very little attention or respect from the literary mainstream. Though they are worlds apart stylistically, both novelists wrote constantly and movingly of the feeling of lostness permeating post-war America. While Kerouac’s reaction is one of sadness, Abbey’s is anger. In fact, Abbey was partway through a first draft of a beatnik road novel when On the Road was released and felt scooped by Kerouac. (A case in point: this article was initially supposed to be about Kerouac, an idea that was quickly—and unsurprisingly—nixed by a certain elitist New York editor.)

Kerouac is denigrated because of his association with intellectually un-serious young wanderers. Abbey’s ostracism is more complex. Perhaps because of his radicalism (which might be suspected of not being ambiguous enough to qualify as truly literary), some find his cult of personality to be distasteful. Most likely, however, is that, despite several years spent in New York, he positioned himself as a deliberate antagonist of the literary establishment. When Abbey is read, Desert Solitaire, his first and best collection of essays (on a par with Thoreau’s Walden), is usually the work brought to the discussion. Yet Solitaire’s most notable achievement is the shedding of the sentimental tradition of Transcendentalism that had dominated “nature writing” up to that point, confronting the human meanings of wildness and wilderness in addition to their mystic otherness.

This is a feat that Abbey had been attempting for some time: first, and most notably in 1956’s The Brave Cowboy. His second novel will disappoint those who carelessly catalog him with Muir and Leopold. Nonetheless, it is his richest and most complete novel of ideas. The story has justifiably been called the first post-modern western. Set in Albuquerque, New Mexico during the Korean War, its protagonist is Jack Burns, “a young man . . . who has read too many old books, seen too many movies; self-hallucinated, he rides the range alone (no Sancho) among the billboards, across the highways, under the telephone wires, seeking adventure, finding ridicule, indifference, a death without dignity.” Burns rides in from the country one day upon hearing that his best friend, Paul Bondi, an anarchist philosopher, is in jail for draft evasion. He plans a jailbreak and escape to freedom, with Burn’s old flame, now Bondi’s wife Jerry, in Wyoming’s Wind River range.

The story is as exciting as it is melancholy (captured well in 1962’s movie adaptation starring Kirk Douglas – in his favorite role, as Jack Burns—and Walter Matthau), and its characters more complex than most in Abbey’s later fiction. The cowboy has been to college (where he met Bondi and attracted the attention of the FBI for his anarchist activities). He has ridden his horse Whiskey to the Trinity test site where the atomic bomb was first tested, flattening his childhood home. Bondi, wilting in self-imposed imprisonment, professes that he will “never sacrifice a friend to an ideal” while his wife pines for him and his young son grows up fatherless. The would-be villain is Sheriff Morlin Johnson, a small-town cop (played sympathetically in the movie by Matthau), who, as the story opens, is investing in a corrupt land deal to build suburbs in the desert. The person of Johnson sympathizes mightily for his quandary, roots for him, envies him the ability to live beyond the system as a full person. During the manhunt, deep in the impassive canyons, Johnson comes near to an epiphany, to resolving his internal tension by shedding his Sheriff’s role. The feeling passes, though, and the man dutifully executes his mechanistic role as Sheriff.

All of the characters are suffering, most from the alienation they experience as the affluent society takes root and the self-sustained, self-realizing Old West dies. Burns, on the other hand, suffers because he will not—cannot—experience life in this mediated fashion and so must be destroyed. This bifurcation between the fully human and the alienated power of our modern systems—often within the same person—is the great evil that drives the action in Abbey’s novels.

Readers who come to The Brave Cowboy by way of Desert Solitaire and The Monkey Wrench Gang may not know what to make of it. Abbey was never a liberal or environmentalist in the sense we tend to think of those roles today; he was writing first and foremost as a Western anarchist. While mainstream environmentalism and conservationism focus on the value of scenic grandeur, the “rights” of non-human beings, and the necessity of temporary escape from the nine to five grind – packaging National Park brand beauty as spectacle and commodity—Abbey articulates his love of wild landscapes as a place, not to leave humanity behind, but as the only space left to be fully human at all. It is a pedagogical place, one that teaches the sojourner that both more and less is possible than society would have us believe. It is also a practical place, a terrain on which one can be free now (no need for bloody revolutions), the haven of guerrilla warriors and outlaws.

The original edition of the novel ended with the cowboy (squashed by a semi full of toilets) dying on the blacktop of an Interstate—–the phenomenal enemy of the very concept of place, much less wild place. The clear message was that a fully realized—wild —human would not, could not, survive in the tautological environment of modernity. Starting with the 1971 edition, however, the story ends ambiguously—Burns spitting blood, Whiskey screaming in the night, a crowd gathering. Indeed, Burns appears in four more novels in various guises, bearing the obvious scars of this mishap, giving aid and inspiration to those struggling for freedom. It is hard to say why Abbey moved toward optimism, rather than the more typical disillusionment, as he grew older. Perhaps it was because of the growing legions who shared his values—many in no small part due to his writings. Or perhaps, twenty-five years removed from Trinity, the rubble of 1968 still smoldering in the cities, Abbey saw cracks appearing in the edifice. As he frequently quipped when criticized for being overly negative:

Ben Gore is a novelist and essayist who is between homes. He is currently at work on a book about bicycles and their meaning.

Jane Freilicher: Parts of a World

Freilicher, a quietly brilliant painter of interiors, is represented here with 15 still lifes that show the full spectrum of her work from the 1950s to the early 2000s. The muted hues of her paintings, combined with a high lyricism for which she was known from the beginning of her career, invests her work with a poetics that can only be admired, on both a thematic and a technical level.