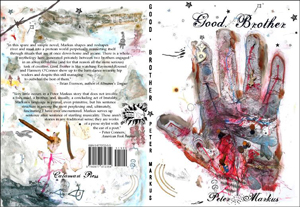 “In the beginning was the word and the word was mud” (John1:1). This quote prefaces Good Brother, by Peter Markus, detailing characters living and surviving in a particular, diminished landscape. The book is equally plausible as a narrative, about people navigating a bleak environment, and as a particular psychic terrain, with interwoven elements of things real, imagined and symbolic. The deft blend of brutalities, forms of tenderness, outbursts, and discipline, covers complex and convincing ground. With no wish to live in, or even visit such grounds, I am willing, even thankful, to be absorbed in the world they make up. Markus strings together sentences that are astonishing, rhythmic intonations. With them he returns, again and again, to an uncomfortable, unpredictable, yet uncannily familiar sense of symbiosis. His piercing depictions of love, family, survival and grit are presented in ways that underscore the importance of stories themselves as vehicles able to express and connect such primal elements of our existence.
Markus writes like a blues singer; his tools are limited and specific. He employs just a few notes, but oh how those notes ring. They include: brothers, father, mother, river, mud, rust, dirt, girl, and fish. The brothers are actively diligent in their diminished, dirty, scant, physical world, making mud soup, catching fish, cooking them, nailing fish heads, and one another’s hands, to things. As you read the book, the preface quote, particularly the word “beginning”, is called into question. The brothers’ way of life is an adjustment, perhaps a set of responses to something that has happened. And what that thing might be becomes an important subtext. Clearly, it is not just any slight thing, but some big, harsh, unalterable thing that has occurred to generate the conditions of this particular beginning. Why are these people so poor, why is their river so dirty, where does mom go? Throughout the narrative, one wonders what came before the beginning.
Markus lives in Michigan, the lower part of the state, outside of Detroit. I mention this because I believe the work can be looked at as a contemporary parallel to a famous collection set in the woods of Northern Michigan, Ernest Hemingway’s Nick Adams stories. Nick, tall, brawny, appropriately dressed, treks through towering forests, fishes in sparkling rivers, neatly fries his catch over a fire he makes himself, has a doctor father. These brothers, you imagine, have one set of clothes, are thin, and in need of sunlight and vitamin C. They fish in sludge, their family eats the fish that surely tastes of it. Nick is destined for greatness, at least upward mobility. These Good Brothers, in contrast, are fully occupied doing what they need to do to get by.