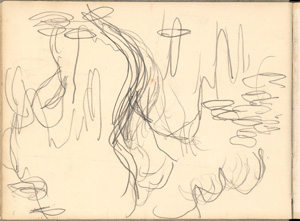 The title of The Unknown Monet: Pastels and Drawings is a bit of a feint: the artist’s works on paper, including his youthful caricatures, are cited in a number of monographs published over the past half century or so, from William Chapin Seitz’s Claude Monet (1960) to Paul Hayes Tucker’s Claude Monet: Life and Art (1995), not to mention Monet by Himself: Paintings, Drawings, Pastels, Letters, edited by Richard Kendall (1990).

What the exhibition sets out to do is to undermine the simplistic notion of Monet as the archetypal dauber, a proto-performance artist whose paintings are virtually byproducts of his plein-air retinal engagement with the prismatic effects of light. For such a reputation to persist despite the studio origins and monumental scale of the Water Lilies is absurd, of course, but false perceptions die hard—less for want of information than for the mythic narratives they reinforce. The image of Claude Monet at his easel spontaneously generating masterpieces in the bright sunlight is one of the more vibrant illustrations in the centuries-old playbook of the individual genius touched by the divine—a key rationalization for Western culture’s extreme self-regard.

In this scenario, spontaneity is the equivalent of emotional authenticity, and any degree of preparation somehow turns the enterprise into a lie—a concept epitomized in the mid-20th century by the Action Painters and Allen Ginsberg’s Beat credo of “First thought, best thought.” It’s a manifestation of Blakean Romanticism that resurfaces at specific times for specific reasons. The Beats and the Action Painters, assuming the role of the artist/shaman, responded to overwhelming threats like the atom bomb (as Blake did to the dehumanization of the Industrial Revolution) with an ecstatic transcendence outside the fetters of civilized norms. They reached nirvana by diving into the abyss.

No one can make that claim for Monet, whose touch and taste, even in his most accomplished work, barely elude mere prettiness. (Ironically, his contemporaries Degas and Cézanne, who made innumerable preparatory drawings and approached their art with a workmanlike precision, display a far greater awareness of the barbarous impulses breaching the surface of enlightened society.) No, Monet is an even rarer bird, one whose outpourings are seemingly untouched by anguish or doubt and appear as perfect as they are uncontainable—Raphael, Fragonard, Mozart, Mendelssohn—and whose Apollonian splendor somehow exists outside of time and ordinary human concerns. Monet’s predominantly unpeopled landscapes are visions of the world we’d prefer to live in rather than the sorry mess we have. He painted whatever he saw front of him, but his extraordinary pigmentation juiced his handling of light into a celestial realm, investing his pictures with a feeling of inspired improvisation, as if they were visions sprung directly from the brow of the Almighty. If that’s the case, a preparatory pastel of a cloudscape or a pencil workup for the composition of “Luncheon on the Grass” is nothing short of heresy.

Curiously enough, since there is a hard fact or two—however murky and dissociated—behind every myth, it shouldn’t be surprising that a close look at this selection of some of Monet’s most intimate works reveals glimmers of truth within the illusion. In this regard, spontaneity—as captured by a graceful whip of a line or an uncanny collision of shapes—can indeed be read as a trace element of inspiration. Their immediacy reveals an almost childlike honesty in Monet’s approach: their inner life depends on just how much the artist was “on” that day. There’s no faking it, and the choice of medium doesn’t make a difference. The flicker and dash of a pastel can make a related painting seem dry and overworked, while other sketches can feel crabbed and fussy or smudged and dull. The most potent and—as reactionary as it sounds—inspired works, however, deliver a startling sense of aesthetic prescience.

An early drawing of a tree trunk, made a couple of months before his seventeenth birthday, anticipates van Gogh’s boldly incisive crosshatching by thirty years. A pellucid, off-kilter vista of fruit trees, made between 1865 and 1875, dominated by a looming swath of cobalt and squiggly gradations of yellow-gray-green, brings to mind the freewheeling structure of Kandinsky’s 1913 abstractions. And a late sketchbook study of water lilies from c.1914-1919—a ghost dance of indecipherable shapes and scribbles—evinces the same liberated approach to form-as-energy that’s found in de Kooning’s sketchbook drawings from the mid-1970s. These latter two images feed into the common though specious conceit that Monet was a precursor to abstraction. Although his diaphanous sheets of color and floating contours, particularly in the late paintings, kind of look abstract, but Monet never interrogated the efficacy of recognizable imagery. What he achieved was an intermittent, accidental greatness; the most vital of these works bespeak a spaced-out rapture of overwhelmed senses and hands going their own way. Insofar as he allowed his intuition to carry him, Monet and de Kooning were dipping into the same stream, and in that essential continuity we might catch a glimpse of Yeats’ “artifice of eternity.”

Motherwell’s extensive oeuvre is divided into a variety of separate media that includes painting, drawing, collage and printmaking. While he experimented with mixed media approaches throughout his career, he tended to ascribe specific aesthetic and technical values to each of these areas of practice, as Katy Rogers noted in the catalogue raisonné of his drawings.

Writing a Chrysanthemum: The Drawings of Rick Barton

Barton’s drawings are windows into his modest rooms, jail cells, church sanctuaries, and San Francisco’s gay clubs. His work chronicles a period when queer men flocked to San Francisco, yet he was not part of the celebrated gay scene around the King Ubu Gallery founded by Jess Collins and Harry Jacobus with Robert Duncan, and he was not known to other San Francisco artists like Wallace Berman and Bruce Conner.