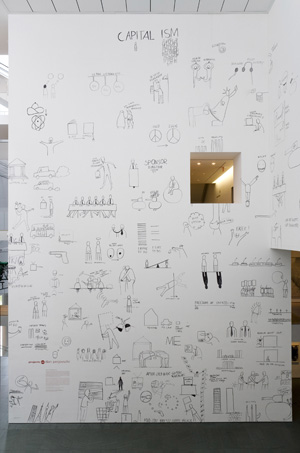 Recently the Museum of Modern Art offered Dan Perjovschi the Marron Atrium, and he promptly defaced it with nearly the same caricatures he had painted directly on the walls of Lombard-Freid Projects in Chelsea in a show called Back to Back (with Nedko Solakov) in April 2006.

Now it’s called Projects 85: Dan Perjovschi, WHAT HAPPENED TO US?, organized by his compatriot-insider Roxana Marcoci, (Curator, Department of Photography) and consists of satirical drawings with a big felt pen, cartoons commenting on the post-9/11 fears of Americans, and the idiosyncrasies of New Yorkers. Perjo is true to his rough proletarian colors, protesting governmental lies with sexual innuendo and clever puns, his political graffiti translated for American consumption and scrawled across the height of the atrium. Describing himself as a “post-modernist, ex-communist artist,” Perjo comments on the “politics of fear” with a cartoon of a person on his toes peering into the outside world through Venetian blinds painted as the American flag; in another he crosses the letter “r” out of the word FREE so that it reads as FEE with a human figure raising his hands over his head. The reviews of the show compare Perjo’s cartoons to Soviet-era agitprop, characterizing his political caricatures as bark with no bite. I would be a bit more blunt: the show is devoid of a central idea or a redeeming sense of hilarity; there is no evident special talent on display, nor are there any new or exotic emotions, as if someone (such as a curator) had sanitized it for a museum audience. Perjo’s cartoons are really made for the newspapers, where he is employed, but in no shape or form do they qualify as a museum installation or site-specific anything. Their ephemeral markings are lame and childish, boringly repetitious, consistently didactic, if slightly funny, scribbles.

At the opening there were altogether 19 individuals, counting MoMA staff and the bodyguards of the Director of the Romanian Cultural Institute (ICR), and other Romanian bureaucrats to whom a special thanks is mentioned in MoMA’s brochure (cultural institutions have always had a special symbiosis). The joke was on Perjo and Co.: one can be an “artist-cartoonist” at MoMA and still be ignored. Eventually attendance at Perjo’s recycled show picked up thanks to French tourists who enjoy sophomoric jokes about Americans, and it was extended another month by the proprietors of “museum-turnstile culture.” But the reputation of Romania and its real avant-garde—Tristan Tzara, Marcel Janco, Constantin Brancusi, Victor Brauner—whose works are on display just a couple of floors above Perjo’s playfully gratuitous graffiti, took a big hit.