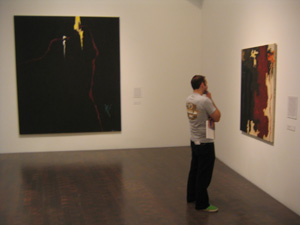 ONE BILLION DOLLARS WORTH OF ART, yeah, that caught your attention, probably more than “great paintings,” “masterworks of Abstract Expressionism,” or “a unique opportunity for in-depth study of one artist’s oeuvre.” But that figure is not hyperbole; it’s an accurate estimate of the value of the Clyfford Still Estate, which will be housed in the Brad Cloepfil-designed Clyfford Still Museum in Denver. We have seen a Pollock go for $140 million, a de Kooning for $63.5 million, a Rothko at $73 million, and a Johns for $80 Million. Last year witnessed a new auction record—$21,296,000—for Still’s own “1947-R #7.” So you could say that this group of more than 2,400 works by one of the founders of Ab-Ex is a “Diamond as Big as the Ritz.”

I’ll admit I’m a sucker for the mythology of the Abstract Expressionists and the New York School but, as a fellow Westerner, I feel a sympathetic nudge toward Pollock and Still. Clyfford Still (1904-1980), though less known than Pollock to the general public, chose a strategy for dealing with market forces that was as prickly and uncompromising as his paintings. In “An Open Letter to an Art Critic,” published in the December 1963 Artforum, Still writes “…I had made it clear that a single stroke of paint, backed by work and a mind that understood its potency and implications, could restore to man the freedom lost in twenty centuries of apology and devices for subjugation. It was instantly hailed, and recognized by two or three men that it threatened the power ethic of this culture, and challenged its validity.” Whether idealistic or delusional, this level of Old Testament prophet-like conviction emboldened Still to reject the corruptions of the New York art world. Ironically, he had enough market savvy to show up looking sharp, in a crisply pressed suit, for Nina Leen’s famous 1950 photo, “The Irascibles,” and later agreed to be “exploited” by Dorothy Miller’s “15 Americans” exhibition at MoMA in 1952. However, just as critical and market interests were taking notice of what would become the first internationally accepted American art movement, Still wrote a scathing series of screeds denouncing many of his old confidants and supporters, including Rothko, who had introduced him to Peggy Guggenheim, paving the way for his groundbreaking New York show in February 1946 at her Art of This Century Gallery. Simultaneously, Still flipped off the dealers, critics and curators who were packaging him and his peers for worldwide consumption.

Having seen firsthand the negative impact of commercial manipulation on an artist’s work (most memorably, Pollock’s bad end), in the early sixties he hunkered down in a country house in Maryland and came to believe that the only way to maintain the significance of his work was to control every aspect of its presentation. In the last twenty-five years of his practice he consented to only two museum exhibitions, one at the Albert-Knox Gallery, Buffalo, in 1966, and at the Metropolitan Museum of Art just months before his death in 1980. Since then, as stipulated in his will, the work in the estate, the roughly 950 oil paintings and 1,600 works on paper—an estimated 94% his total output—has been stashed away in storage, awaiting an offer from a city willing to build a museum to show it. As you might expect, even from the grave Still controls virtually every condition under which his work can be seen, including caveats like: no other artist’s work shall be shown in the museum unless it is in context with Still’s work; no sales or loans from the estate; no auditorium or restaurants on the premises. Even the heights of the ceilings in the viewing areas are specified.

The deal brokered in 2004 between the artist’s widow, Patricia Still, and Denver’s mayor, John Hickenlooper, facilitated by the Stills’ nephew, Denver resident Curt Freed, calls for an outlay of $12 million to $20 million dollars, raised from private sources, for construction of the museum; which is to be located directly behind the Denver Art Museum (DAM). It’s expected to open in 2010. All this comes right on the heels of the DAM’s recently completed 30,000-square-foot, $75 million Daniel Libeskind-designed Hamilton Building, which required Denver voters to approve a $62.5 million bond initiative. While I’m heartened by this kind of community support, I’ve got to think that the city fathers and mothers were casting a longing eye on sites like Don Judd’s Chinati Foundation in Marfa, Texas, or James Turrell’s Roden Crater project, and betting on Still’s draw to raise Denver’s standing as a cultural tourism destination.

Clifford Still Unveiled: Selections from the Estate, is a mouthwatering hors d’œuvre of what will, no doubt, be a full course meal when the CSM opens in 2010. Though limited to only thirteen works, it displays a chronological view of Still’s stylistic trajectory, with revealing examples of his “American Scene” figurative paintings, strange transitional Surrealist works, and various phases of his mature, earthy-hued, jagged abstractions. A self-portrait, “Untitled (PH-382)” (1940), is a surprisingly competent rendering of Still’s stern, tight-lipped face atop a three-quarter-turned torso caped in a long black smock. The glowing flesh of a half-closed hand at his side foreshadows the light-on-dark flickering forms of the later pictures. Already predominant are the rusty reds, blacks and putty grays. And his full-bodied impasto is evident in the boilerplate, Benton-like “Wheat Shockers (PH – 77)” from 1936.

Still’s reputation as a seminal Abstract Expressionist in its most American sense was based to a certain extent on his uncontaminated native approach—at least that was the image he sought to present by destroying much of his early work. A couple of surviving transitional pieces from the late thirties display a befuddling amalgam of Social Realism and Surrealism tracking Still’s aesthetically complex leap from figuration to abstraction, which he navigated without passing through Modernist abstraction’s gateway, Cubism. A pastel and charcoal drawing from 1935 shows a long, mask-like face alongside an equally long hand hanging off a pitchfork. The black outlines, elongated and indistinct features, and brown tonalities render this composition as repugnant and unsettling as some of Guston’s late “Dung Beetle” images but without Guston’s pleasant pinks. Another stunner, “(PH–343)” from 1937, is a vertically bifurcated composition in which an odd, disquieting figure on dark brown is paired with stark, attenuated black shapes on a white ground that hint at the gothic value contrasts of the breakthrough abstractions.

Arguably one of Still’s first “Abstract Expressionist” paintings is 1944’s “# 4,” a work he completed after moving to Virginia to teach at the Richmond Professional Institute (now Virginia Commonwealth University). This large canvas (105×92.5 inches) is a monochrome field of heavily knifed black. A crimson line twisting like a stream on a topographical map meanders up the left side and down the right while a white wisp and a pale yellow streak hang from the top edge like Spanish moss. A thick emerald green “flame” near the lower right corner snaps the composition into coloristic tension. The simplicity and elegance of “# 4” is astounding, and its reductive composition, grand scale and attention to the physical qualities of oil paint represent a breakthrough that resonated with other Ab-Exers such as Newman, Rothko, and the Proto-Minimalist Reinhardt, and sent out ripples of influence through Stella, Ryman and Marden, all the way down to Schnabel.

By the late forties, Still had hit his groove. The paintings are less heavily worked, and his employment of raw canvas as both a textural and coloristic element brought a graphic sense akin to drawing on off-white paper, adding lightness and space while contrasting the fat, layered slabs and delicate veins of oil paint. By the time we get to “#2” (1957), the artist is working at full throttle. The flurry of jagged forms across this mural-sized painting seems to flutter and mesh at the same time. With its massive scale and brutal fracture of blacks, reds and tiny flames of yellow and magenta at the periphery, the canvas appears formed more by the forces of nature than by pictorial logic.

Although I’d like to see the Clyfford Still Museum open next door—or at least within biking distance—it couldn’t be more appropriate, given Still’s antipathy toward the New York art world, that Denver should win this prize. Sitting on the western edge of the Great Plains at the foot of the Eastern slopes of the Rockies, Denver embodies the grand contrasts of landscape that inspired Still’s monumental outpourings. I guess I’ll have to settle for visits to his room at the Met while coming up with semi-believable rationalizations for occasional trips to Denver to get my Still fix.