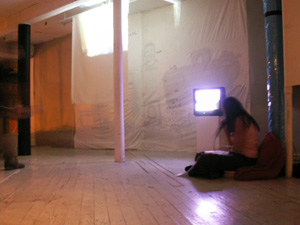 After arriving an hour early to an event at the Grace Exhibition Space in Bushwick, which features performance work, I found myself chopping vegetables in the kitchen. It was another Performance + Dinner! Thursday, and the Dominican artists of the Colectivo Chocolatera were preparing Sancocho, a traditional festival dish; this, however was no intervention or audience participation piece—these folks needed help with the salad.

The Colectivo Chocolatera, in residence at Grace for the summer, is a loose network of artists working with visual performance (not an art collective in the strictest sense, they have no manifesto or singular area of interest). In 2004 they pulled off the international performance art festival CHOCOPOP, showcasing Latino performance artists and international groups. An abandoned chocolate factory in Puerto Plata served as the event’s hub, and they’ve been living and performing there ever since. This collective sensibility makes them a good fit for Grace, which is run by the curatorial team of Jill McDermid and Melissa Lockwood, who have a history of inviting foreign performance groups like NONGRATA to experience New York and share their work. The 2,700-square-foot-space looks like an unfurnished loft apartment, with makeshift bedrooms and a large performance/installation area.

Once the meal started cooking, Chocolatera member Manolo Vidal gave each guest a disposable camera, declaring us all cyclopses. Vidal then maneuvered a projected digital video across the wall as another collective member, Patricia Minalla, recited a conversational poem in Spanish. Trying to watch the video—a rapid succession of quick shots of Latino commuters on buses—as Vidal bobbed the image about the wall created its own kind of dizzying buzz. It could have been shot anywhere: only the sound of a certain ubiquitous ice-cream truck jingle hinted that it might have been filmed in the States, even New York. Minalla’s words seesawed from whispers to anxious jabbering, descending into a delicate ‘shhhhh’ as the projector shut off.

I lost the connection between commuters and cyclopses despite Vidal’s enthusiasm over their metaphorical relationship during our conversation afterward. Does the singular eye represent the ‘tunnel vision’ associated with the daily grind? Or the mythical cyclops Polyphemus, who was blinded by Odysseus and called himself Nobody. Does Polyphemus symbolize exploited laborers while Odysseus is an opportunist masquerading as a man of reason? Is Nobody to blame for globalism?

Afterwards McDermid directed our attention to an installation by Checo Merette and a video by Eliu Almonte who’d both been lured to Miami by an interested gallery. The specter of the collective’s solidarity suffering careerist attrition, even briefly, cast a momentary shadow over the evening. Merette’s tent sheltered a monitor playing the negative image of a flickering candle, and Almonte’s video featured a childlike voice narrating the fate of a plate of food held outside an apartment window – a playtime that I would have rather witnessed in person.

Orlando Menicucci executed a series of actions with paint and canvas that were regrettably typical of lackluster ritual performances. Before long he added an interesting, if obligatory, video component to the proceedings, turning on a recording of himself explaining the history of the Dominican Republic in Spanish to a Japanese man. Despite the language barrier, they seemed to understand each other. While competing for attention with Menicucci’s live performance, the video exposed our misplaced trust in language: knowing neither Spanish or Japanese, I sought information from the video instead of the action taking place before me. Menicucci ended the piece by slathering a broomstick nailed to a brush (a makeshift sword) with gold paint and holding it aloft while reciting the words “Cielo contra Oro,” sky against gold, in a gesture evoking a gold-hungry Spanish conquistador. Afterward the Sancocho—prepared by Hanoi Acosta with the other collective members and their guests—was served.

Helping to prepare a salad, mingling with Colectivo members, sharing Sancocho—these “in between” moments are as pivotal to the Grace project as the performances enacted there (many more than I have room to describe) and reminded me that art is only worthwhile if it has the power to enliven what surrounds it. Through such intimate encounters between performance groups and their guests, McDermid and Lockwood could follow in the spirit of Yoko Ono’s Chamber Street loft or the Surrealist soirees of Paris, where revelry and banter became ends in and of themselves.

In Quantum mechanics, the Double Slit is the name of an experiment that reveals the simultaneous nature of energy and matter, as well as the imprint consciousness has on our material world. Is the body a wave or a thing, an event or a subject? Do we move in stops and starts or is our lens too small to see the flow? Maybe we are always in simultaneous states of pause and action, if we could only see energy and matter at once.

Louise Fishman: An Hour is a Sea

Originally intended for Frieze New York, the works went online due to current events, but one can’t escape the sense that the digital format, while denying us the materiality so vital in Fishman’s work, enhances our experience in other ways, enlarging the paintings’ scope as if to compensate for their physical absence.

Theorized by Gregory Markopoulos as an ideal setting for screening his eighty hour film, devoted cinephiles schlep to the mountains of Greece for the aesthetic experience of screening Eniaios at the Temenos.