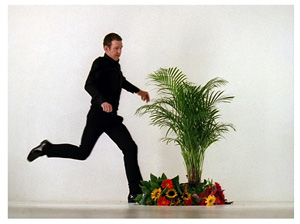 In November 2002, I was invited to do a series of lectures in the Republic of Korea, one of which was at Gae Myoung University in Daegu, the third largest city in the southern half of the peninsula. During the Q & A part of my lecture, a young man raised his hand, apparently disturbed by my critical comments on the work of Jeff Koons. Working through a translator, he expressed his anger that I was critical of an artist who was famous. When I asked why, he reiterated that because Jeff Koons was famous, no one should be critical of what he does.

The trend away from criticism and toward “theory” began in the late sixties when conceptualists disclaimed formalist aesthetics by substituting linguistic propositions about art for art itself and, in the process, rejected criticism as irrelevant. Not to belabor the point in academic jargon, but Martin Creed’s work often appears immune to criticism. Not that it ascends into an ideal aesthetic, but quite the opposite. He is a symptomatic artist, more than a significant one. Like Baudelaire’s Constantine Guys, Creed may be the artist of our time, an artist who reflects everything, yet ascends toward nothing in particular. As for the compelling gutsiness that viewers may associate with works by Bruce Nauman, Creed may hold the surface, but not the substance. His work is a sequence of shadows that appear and disappear on even terms, a horizon of neutrality that nevertheless has its appeal, as audiences forever desire whatever art is easiest.

Even so, Martin Creed comes from the U.K. with serious credentials, including exhibitions at the prestigious Hayward Gallery in London, the Berlin Biennial, and the Fondazione Nicola Trussardi in Milan. He was awarded the Turner Prize (2001) for a neo-conceptual piece entitled “Work No. 227: The Lights Going On and Off,” in which a gallery’s lighting fixtures are timed to turn on and off at five-second intervals. This piece is included in Creed’s exhibition, entitled Feelings, at the Hessel Museum of Art at Bard College.

With Creed, one may discover acculturated signs from both minimal and conceptual art. They include predetermined drawings in which a squiggly line is scrawled in ink from the top to the bottom of a page, or there are other versions in which the vertical squiggly line is intercepted by a horizontal squiggly line. Outside a large picture window in the Hessel, visitors may view five conifers planted in a seriated sequence from smallest to largest on the lawn outside, ironically suggestive of Donald Judd or Robert Smithson. Another gallery touts a small circle of “Blu-tak” that the artist has “kneaded, rolled into a ball, and depressed against a wall” (the phrase again ironically reminiscent of an early Sol LeWitt title). The minimal/conceptual aesthetic continues elsewhere with several hundred pieces of evenly stacked sheets of plywood diagonally placed in the middle of the floor. In the largest gallery, where a real Sol LeWitt mural is situated, Creed has installed a baby grand piano programmed to repeatedly open and close its cover every few seconds, making a loud, abrasive whack. The pianoforte recalls the works of the Fluxus musicians in the sixties and seventies, specifically Joe Jones and the brilliant works of Walter Marchetti.

One of Creed’s signature pieces, installed at the entrance of the Hessel Museum, is a collection of inflated blue balloons that virtually filled the space, blocking one’s visual field and occasionally inciting claustrophobia among some visitors. Fortunately, student helpers were stationed outside the glass doors at either end with intercoms in the event of an emergency. Their primary task, however, was to push the balloons back into the space as they inevitably spilled outside as visitors entered and exited. During the exhibition’s opening day, two young people were asked to run through the galleries every five minutes, reminiscent of a work by the postminimalist Barry Le Va, except—as far as I know—they didn’t crash into walls. (On my second visit, however, there were very few in attendance, and the joggers were apparently off-duty.)

From another angle, more an ironical twist on Lawrence Weiner (whose words are embedded in alloy on the cement walkway approaching the Hessel), the artist had neon signs fabricated into various words and phrases such as “THINGS” and “FEELINGS” and “DON’T WORRY.” After being told by the curator of the exhibition, Trevor Smith, that there is nothing cynical about this work, I will avoid bringing Peter Sloterdijk’s “Critique of Cynical Reason” into the discussion. Instead, I will defer to a credo by Creed, published in bold type on the museum’s handout: “I try to try many things. I don’t believe enough in one thing to do just one thing. I can’t. I’ve had enough.” In another, unsigned essay printed on the handout, I discovered a curiously evasive concept that I probably would have never known had I not had this document to guide me through the exhibition: “Creed’s is a democratic art. Rather than finding beauty in traditional hierarchies, he finds potential in all manner of ordinary materials and objects found in the world around us…”

Mounted along the walls of the entrance to Bard’s prestigious Center for Curatorial Studies, directly adjacent to the Hessel, and down along the corridors on either side, between the library and the bathrooms, there are pages (and pages) of individually framed drawings, each done entirely in monochrome. Sometimes the colors are repeated, sometimes not. Each is drawn with standard markers by colleagues or friends of the artist, who were invited to contribute to the project. The monochromes may be observed while listening to a row of metronomes, lined up on the floor against a wall in another gallery, ticking in monotone at different speeds according to individually prescribed settings. Get it? Monochrome and monotone. In fact, this was a signature concept employed by Yves Klein in 1961, but in a different context. With Klein, a monochrome blue pigment was used by four female models who essentially painted their nude bodies in a shallow vat on the floor and then impressed themselves on large sheets of paper, accompanied by a string quartet playing a single note throughout the performance.

In fact, one might even consider these object-gestures as proto-conceptual, specifically, in relation to works by Klein and Piero Manzoni (an artist who produced cans of his own excrement). Creed is apparently as fascinated by Manzoni’s subject matter as much as Klein’s. For example, two of the more controversial works in Creed’s oeuvre are two DVD projections, also included in Feelings, entitled “Sick” and “Shit,” both made in 2006. Whereas the former is focused on individuals entering a white space, as if on stage, for the purpose of vomiting, the latter relies on the same dramaturgy with the isolated subject performing defecation. With the performer in “the White Cube” without a toilet, we might say these are films with standing room only. Whereas the Press Release tells us that “the individuals reveal a range of personalities invoking a range of responses, such as empathy, embarrassment, disgust, and pride,” my response is—dare I say—more critical. I felt I had entered a classroom on cultural anthropology to learn about life in a hyper-materialist culture where the inhabitants are psychologically obsessed with guilt, inferiority, and projections of primary narcissism. I understood feelings as a refinement of human emotion, the latter of which can go in any direction. There is no doubt that I got the lesson, but somehow, in the process, I missed the feelings.

How Can We Think of Art at a Time Like This?

Co-curated by Barbara Pollack and Anne Verhallen as a platform for the exchange of art and ideas at a time of crisis, How Can We Think of Art at a Time Like This? is an exhibition without walls, created almost overnight to respond to museum and galleries’ closures due to the COVID-19 pandemic, as well as a platform for free expression, inviting visitors to post responses on its Comments page.