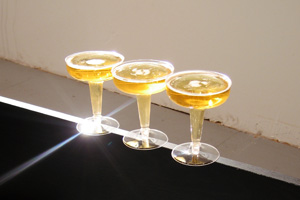 Remember when curators were content to take a passive role in the art world, when they were agents and administrators of creativity rather than producers in their own right? It seems as foreign and distant now as having to go to a travel agent to buy a plane ticket. Today, curators and artists stand side-by-side on the cultural production line collaborating as virtual equals, generating the ideas and defining the terms of how we engage with art. This fact is never more apparent than in late summer, when guest-curated group shows take over carefully manicured galleries like unchecked crabgrass. At their worst they are cobbled together from a selection of fashionable but otherwise unrelated artists, capped off after the fact with a title that functions as a rhetorical smokescreen, obscuring the absence of a point rather than making one. At best they are conceptual art projects in their own right, functioning in symbiotic accord with the artwork, clarifying it and providing it with needed context.

By late July curatorial dominance hovered so oppressively over Chelsea and most of Williamsburg that after encountering more smokescreens than symbiosis, I headed east toward Bushwick to Temporary Storage to see a show called Analogous Logic. From the initial look of things and the generic title, I braced myself for more smoke. Inside, I was welcomed with a transcript of the beery conversation that spawned the show, in which curators Lumi Tan, Summer Guthery and participating artist Douglas Paulson recalled their concerns about the difficulty of parsing and decoding information in a media-saturated universe. Somewhere along the way, this spontaneous discussion evolved into an art exhibition.

Fittingly, Paulson’s “PteXXXt” (2007) functioned as Analogous Logic’s conceptual divining rod. His block of black wall text was compiled from pornographic spam, encoded to avoid being caught by security software. One line reads “Rqedhead HOTMPOMS Uzndressing & Glives Bolowjob.” Everyone recognizes this syntax as unique to a certain variety of Internet solicitation. We take it for granted when it’s in our inboxes, but when it graces the wall of a gallery, writ large, its method seems even more viral while its message remains absurdly funny.

The internal logic behind each work and the urge to deconstruct it emerge as the show’s fulcrum. The unambiguous simplicity of Paulson’s piece became especially useful for a handful of less transparent works, such as Brian Clifton’s “Analogous Logic” (2004), which lent its title to the show. It featured eight seemingly unrelated texts and two photocopied images, one of an interior and the other of kudzu-like moss overtaking an outcropping of land. Its common denominator was that each element described a human attempt to control a natural phenomenon that backfired calamitously.

Some of the work, such as Jeffery Lopez’s “Twist and Fold”—knotted rulers that literally twist and debase a standard for empirical measurement—and Tauba Auerbach’s “NINES” (2007) are poetic symbols of logic’s weaknesses rather than products of it. Colby Bird’s “Avalon” (2007), on the other hand, was a perfect fit. It featured a boxy speaker topped off by three champagne-filled plastic glasses. A beam from a nearby spotlight bathed this enigmatic formation in a depressing, orangey wash. Fruit flies swarmed the aging alcohol. By itself, “Avalon” would be strange and alluring, a sorrowfully elegant composition on the order of Felix Gonzalez Torres’s strands of lightbulbs. But in this context it acquired an implied narrative that enticed the viewer to reconstruct what festivities might have preceded this

forlorn conclusion. Nearby, Xylor Jane’s systematic abstraction, “Grain Fed” (2004), felt passive by comparison—a sensible inclusion in the show, perhaps, although I craved more of the mystery found in Colby Bird’s sculpture. Jane’s work is always handsome and intriguing, but its subtle flavors can be easily overpowered by the less behaved and more puzzling. That said, work like Jane’s and John J. O’Conner’s “Oh I’m Sorry” (2004) provided a conceptual armature on which to wrap one’s understanding of those that were more opaque.

From the outset Analogous Logic successfully made external order out of work whose internal order is intentionally obscured. In almost every case, this imposed structure mutually benefited the artists and the curators. Analogous Logic was also a prime example of the growing assertiveness of the curator in contemporary art. If you find this disagreeable, that horse has already left the barn. Considering this, it’s good to know that curators Lumi Tan and Summer Guthery knew where they were going before they departed.

The artist is the star soloist of the performance, and any arts worker who works in an artist studio—whatever position they hold—must understand that the crux of their job is to give the artist an environment at center stage to be free and creative. There is a certain intangible origin of the imagination from which ideas emerge and crystallize into artistic production. Such a birthing process requires the artist to harness the possibility for expression, free of constraint or limitation, and, in doing so, perhaps tap into a pure, unadulterated version of themselves.

Brown’s a Color, Black is Not

Despite the depth of curatorial research into the pioneering works on view, the peculiarity of ecofeminism(s)’s delimited scope presents an occasion to think through the role of cultural essentialism in the mediation between appropriation and inspiration, and offers insights on the strategies through which the politically correct anti-Black art world is currently reconvening.

Coleman Stevenson is the author of three poetry collections (Light Sleeper, Breakfast, and The Accidental Rarefication of Pattern #5609), several books about the Tarot including The Dark Exact Tarot Guide, and a book of essays on creativity accompanying the card game Metaphysik. Her writing has appeared in a variety of literary journals and the anthologies. In addition to her work as a designer of tarot and oracle decks through her company The Dark Exact, her fine art work, exhibited in galleries around the US, focuses on the intersections between image and text. Learn more at colemanstevenson.com.