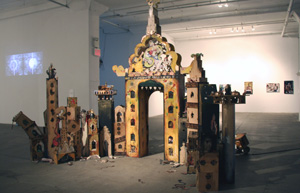 The South Asian Women’s Creative Collective celebrates ten years of artistic and intellectual work with Sultana’s Dream, an Exit Art exhibition that epitomizes the group’s aesthetic accomplishments and its strength as a collaborative community. Curated by SAWCC founder Jaishri Abichandani, Dream comprises works from thirty emerging and established female artists, including long-time members of the collective as well as new contributors attracted by an international open call for submissions. The result is a diverse collection of projects, each involving at least two artists, each drawing inspiration from contemporary art, consumer culture, entertainment media, religious iconography, Tantra, the Torah and the Qu’ran. The projects blur boundaries between visual arts, dance, painting, filmmaking, and music composition, representing a fusion not only of creative disciplines, but of cultural experiences.

Sultana’s Dream takes its title from a text by Begum Rokeya Sakhawat Hossain, originally published in India in 1905. This wry, subversive narrative describes a utopia where men demurely retreat indoors while women take their place in the open, pooling intellectual resources in all-female universities and expressing themselves freely in their homes and streets. In a sense, the story serves as a manifesto for the Exit Art show, and perhaps for SAWCC itself. Following the model of women in Hossain’s Dream, SAWCC members refuse to be marginalized and reject their assigned roles—they invert male homosociality and create a new context in which women dominate social and political discourse. Hossain’s narrative suggests that such inversion allows for tremendous strides in the fields of science and aesthetics, ultimately moving toward a society where beauty and pure expression flourish. The SAWCC exhibition ardently pursues this possibility. As Abichandani remarks, “[SAWCC women] have all been marginalized in so many ways, and there are so many spaces in which we are the Other.” But their collective provides a space in which this pattern is finally broken.

For an indication of the SAWCC’s creative direction, one might look to visual artist Shahzia Sikander. First fully acknowledged for her contribution to American art when her work appeared at the Drawing Center and the Whitney Biennial in 1997, Sikander has consistently and intentionally resisted classification. Grounding her work in the writings of Michel Foucault, Helene Cixous and Edward Said, she communicates a deep suspicion of binary oppositions, always seeking a “third space” outside of them. At the beginning of her career in Pakistan during the late 80s, she explored issues of globalization and shifting identity by creating a hybrid of two opposing forms—traditional art and commodified kitsch. She focused primarily on miniature painting, re-appropriating this once-valued art form and examining its dual roles as a symbol of cultural heritage and fodder for tourist consumers. Recent descriptions of Sikander attempt to define her as an artist interested in the struggle between opposing forces—East and West, ancient and modern, or good and evil—but her body of work hardly seems to support this. Depicting both ancient Greek and Indian gods alongside animals and modern machinery, Sikander creates spaces where conflicting images are united by an overarching compositional harmony, where seemingly disparate ideas resonate with one another, albeit cacophonously. Despite audience attempts to exotify her (erroneous rumors circulate that she hand-makes her papers and inks), Sikander addresses such a broad spectrum of issues that she defies categorization. Combining elements of textural collage with digital imaging techniques, and layering images from a staggering number of sources, her work remains in constant flux.

Sikander’s fluidity is evident in her Exit Art project Collaboration, a video installation in which dancer Sharmila Desai performs an original piece on mats painted with vine-like patterns. On the screen’s two-dimensional plane, Collaboration collapses space between the dancer and Sikander’s painting, urging us to view Desai’s flowing hair as an echo of the artist’s twisting, organic designs. Here, Sikander explores the possibilities of fusion yet again—gestures in dance and visual art combine to create a single cohesive movement, and two seemingly separate art forms find common ground. Even Desai herself comes to represent blurred identities, as she employs a dance style that references both classical Indian dance and Yoga. Collaboration typifies Dream’s attention to destabilized categories and its ability to utilize the power of cultural references while revealing their fragility.

Another installation nearby employs similar tactics with a much lighter tone. Pilgrimage, a post-apocalyptic sculpture by Ela Shah and Asha Ganpat, freely combines elements of traditional Eastern architecture with fragments of a modern Western skyline, and employs both religious and commercial icons. A central arch is delicately encrusted with gold and surrounded by Indian gods and goddesses, but it also bears an image of Big Bird, several Hummel angels and a Spiderman figurine. The structure, with its pleasing horizontal symmetry, immediately exudes a sense of lightness and playfulness.  Dispelling audience hesitation to approach its simultaneously intimidating and kitschy towers, the structure lures viewers in by lighting up as they come near, thus urging further and more intimate exploration of its Labyrinthian complexity. Yet despite all this warmth, Pilgrimage relays a darker message. Beyond the comical pop culture references, this installation resembles a decadent city on the brink of collapse, a city so saturated with conflicting influences that it threatens to come apart. In this fragmented structure, cultures come into contact, but violently lean away from one another.

Through Dream, SAWCC reveals complexity and contradictions behind apparently stable definitions. In Unsuitable Girls, Swati Khurana and Anjali Bhargava tackle stereotypes with a series of photographs that portray South Asian women winning trophies for domestic sloth, dishevelment, and reluctance to marry. Asma Ahmed Shikoh’s Beehive disrupts the blind political controversy associated with headscarves by emphasizing their individual, personal significance to Muslim women across the United States. And, in a collaborative project helmed by Fariba Alam, SAWCC pays humorous tribute to nineteenth-century Indian photographer Lala Deen Dayal, whose images recorded the diversity within his nation’s population while British ethnographic photographs sought to essentialize Indian culture and define boundaries between stratified economic groups. In this project, a collection of digital inkjet photographs doctored to include the faces of SAWCC women, curator Abichandani can be seen portraying a courtesan at rest. “[Alam] asked me if I wanted to appear in one of the pictures, and I immediately knew which one. The courtesan represents power and intrigue, she is fanciful yet political,” Abichandani says. She identifies the courtesan as a marginalized woman who moves beyond her assigned role—a resourceful, creative, and adaptable woman who finds a way to make her voice heard.

For SAWCC women, the Sultana’s Dream exhibitis a communal wish-fulfillment, a manifestation of their collective desire for aesthetic and expressive freedom. As Abichandani comments, “None of this work would exist without SAWCC. The collective provided a forum, and the work grew out of that.” The group began not as an official incarnation of a pre-existing community, but as a new nexus for artists with similar intellectual and political concerns, all exploring similar aesthetic tactics without external support. At times, the collective struggles to reconcile opposing desires—to protect the safe forum it has created while remaining true to its rejection of rigid definitions. Last year, for example, SAWCC’s board agreed to allow male artists into the collective, but constituents responded so negatively that the board revoked its decision. The group’s homogeneous nature has allowed members to feel comfortable when reaching out to one another and—perhaps fearing that new influences will chill communication—no one dares upset the balance that makes SAWCC’s internal generosity possible. But Sultana’s Dream proves the collective quite capable of absorbing opposing parts and creating an impressive whole, as though conflict and fragmentation were assets rather than obstacles.

“Reconstructing a Dream” is the oneiric opening track on guitarist Jakob Bro’s recent release, Uma Elmo (ECM), and it is up to the challenge of its title.

Beverly Fishman: I Dream of Sleep

The overarching theme of I Dream of Sleep is opioid addiction, and by implication Fishman’s conglomerations of squares, hemispheres, pentagons, and triangles model the molecular structure of pharmaceutical “cures” for depression and other disorders.

For an unusually long time, it felt like Marina Xenofontos’s solo show, I DON’T SLEEP, I DREAM, was stuck in perpetual postponement. Originally planned to go ahead in March 2020, it was re-scheduled for December 2020 before a second strict lockdown.

The subject matter of her memoir, however, is vastly different: it centers on the passionate same-sex relationship between the author in her mid-twenties and another young woman that quickly turned sour and became abusive. The eponymous Dream House, the author informs us, is neither a Hollywood set nor a narrative prop, but rather an actual place—the idyllic-seeming home that Machado and her lover shared in Bloomington, Indiana—as well as a “haunted house” where “metaphors abound.”