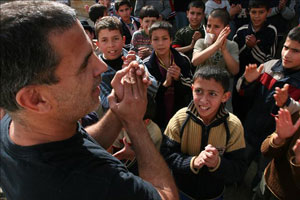 The Freedom Theatre empowers and gives voice to children in the Jenin Refugee Camp through programs in theatre and the arts. Photo by Magnus Johansson courtesy www.thefreedomtheatre.org

While the ethnic cleansing of Palestinians by Israel has been going on for decades, the cultural cleansing of Palestinian society is a relatively new phenomenon. These are the words of Juliano Mer Khamis, a Palestinian Jew with Israeli citizenship who was once active on the Israeli stage. In his words, he was forced to divorce himself from the Israeli audience because of the role that culture plays in politics. What happens—or one can ask, what happened—when culture becomes part of a larger racist politics? The discriminatory politics of the Israeli stage caused Juliano to leave his work as an actor in Israel and go to the West Bank to teach theater to Palestinian youth. The powerful role that culture can play in acts of oppression and resistance is clearly visible in Palestine/Israel.

Recently, New York Theatre Workshop, after canceling a production of My Name is Rachel Corrie last season, has begun highlighting Palestinian theater from a Palestinian perspective. Juliano told his story during his opening remarks for “Aswat: Voices of Palestine,” a two-day festival hosted in May by NYTW and Nibras, an Arab-American theater collective. The program included eight staged readings of plays from and about Palestine, as well as discussions moderated by scholars and theater artists. In July, NYTW will produce the New York premiere of Palestinian-American playwright Betty Shamieh’s The Black Eyed, a tragic-comedy about four women from across history brought together by their relationship to martyrdom.

Connecting his theater work in Palestine to the work on Palestinian theater here in NYC, Juliano defined culture as the regaining of our language as Palestinians through art—in other words, as the regaining of our discourse against the dominance of narratives that have labeled and imprisoned us. Aswat means “voices” in Arabic, and the festival’s program emphasized “unheard” voices from and about Palestine in its selections from the thirty-plus scripts submitted.

As Israel destroys the political, economic, and cultural infrastructure of Palestinians, Juliano said, there is a new generation of Palestinian youth who “have lost their language.” More than six years since the recent Intifada, Israel’s policies of collective punishment have created a generation of children suffering from post-traumatic stress syndrome. Among the symptoms is the inability to speak. In addition to losing the ability to speak the Arabic language, the children have also lost a major outlet of personal expression. It is no wonder the children turn to throwing stones as a small act to express themselves; a small act that often costs them their lives.

Juliano is now known for joining his mother Arna in opening a children’s theater for Palestinian youth in Jenin Refugee Camp in the Occupied West Bank. Established in 1993, destroyed by the Israeli army in 2002, and rebuilt in 2006, the Freedom Theater serves the children of the camp by offering them a space for pedagogical, creative, and social development work through the use of theater. They also stage performances open to the public. The children are currently working on a production of George Orwell’s Animal Farm.

In New York, the performances of the Aswat Festival presented not only Palestinian voices, but stories from Palestine, revealing the desire to preserve and circulate these narratives. In this way, theater performance becomes a form of oral history, documenting and writing certain histories that have been actively erased. Although only two of the plays were presented in their entirety, each performance stood on its own, giving voice to Palestinians from pre-1948 to those in the present-day. Despite the fact that the majority of the playwrights either grew up or now live outside of Palestine, nearly all of the plays took place in Palestine/Israel.

The excerpt from Nathalie Handal’s Deir Yassin: The Stonecutters showed the personal lives of three couples moments before the Zionist massacre at Deir Yassin in April 1948; Afaf Shawwa’s stage adaptation of Suad Amiry’s novel, Sharon and My Mother-in-Law, showed a series of near-absurd episodes that have come to represent the daily realities of Palestinians—the fact, for example, that her dog is easily issued the highly sought-after and rarely-issued Jerusalem ID, while Suad has been waiting for years now to acquire her own ID card; Lameece Isaaq and Jacob Kader’s Food and Fadwa was a humorous piece that opens as a cooking show from Palestine aired on American television, which only later do we learn is an act of imagination to help Fadwa, the lead character, cope with her fiancé’s absence.

Aswat’s program closed with Sami Metwasi’s Souvenir, similar in style to many of the pieces: comedy mixed with the harsh realities of Palestinian life and identity. Using the premise of the guided tour, two of the three Palestinians hired to enact the story of Jesus in Bethlehem attempt to insert their own people’s historical narratives into the ‘official’ script. A scene of Mary giving birth at an Israeli checkpoint is but one example of the many juxtapositions. The emphasis on the historical narrative combined with the need to directly address the audience shows the desire of Palestinian theater artists not merely to be heard, but to communicate. The theatrical mode of direct address becomes a necessity where the writers and actors are not merely seen, but rather see us, forging a direct confrontation with the audience. For it is we as spectators that also have a responsibility in the making of history.

The staged readings, which were written, performed and directed by over thirty Arab and non-Arab artists, including the American playwright Naomi Wallace, does not mark the beginning of Palestinian theater in NYC, but continues the work of theater artists who contest the representations of their reality by performing the daily realities of their lives. The performance of one’s condition is an act that highlights how we define ourselves and how we are defined by others, an act that in itself can begin a process of change. For her part, Betty Shamieh says she invites people to her plays about Arabs and shows them people. The Black Eyed is a piece of this time and beyond, not merely questioning but showing us that what we may think is new is indeed centuries old. For what is the biblical Samson, she says, but a suicide bomber? Her use of myth and humor capture the audience as the play directs issues of violence, seduction, and desire toward us as spectators.

Four women meet in the afterlife outside the “Martyrs Room,” connected in some way to the experience of martyrdom. Samson’s Delilah is there, along with a woman who lived during the Crusades, and two modern-day women: a Palestinian from Gaza and an Arab-American. Each woman has a story to tell and each seeks in the afterlife the words that she did not utter while she lived. In Shamieh’s most stylistically challenging play yet—written in free verse with a chorus—words are reflected off each character as they simultaneously support and challenge one another. “Welcome to heaven, where every-thing you believe to be true is true,” one speaks. “But we can’t control what we believe,” another adds. “That’s what makes our heaven such hell,” a third retorts.

The four stories, Shamieh says, eventually collapse into a challenge between the artist and the militant. Who makes more of a difference? And who has the choice to decide? Palestinian theater artists, here and abroad, are using theater to put both others and ourselves on stage in order to challenge representation and reality.

Rania Jawad is a Ph.D. student in the Department of Middle Eastern Studies at New York University and a member of the Emergency Broadcast Artists.