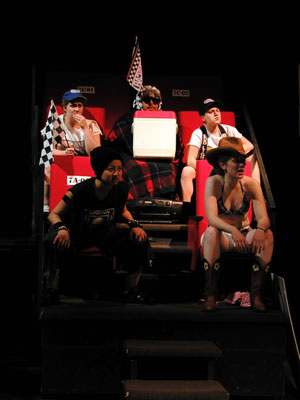 The cast of VROOOMMM! at the Carleton College Arena Theater, Spring 2005

The number one spectator sport in the United States is broadcast in over one hundred and fifty countries and claims over seventy-five million fans with two billion dollars in annual purchasing power. It’s brash, it’s loud, and it’s distinctly American. It’s NASCAR, and in the mind of playwright Janet Allard, it’s theatrical gold. Allard and collaborator Michael Bigelow Dixon have created VROOOMMM! A NASComedy, which comes to New York this July for a weeklong run during the first weekend of the annual Summer Play Festival.

“I was moving to Southern Louisiana and a friend of mine was telling me how popular NASCAR is down there, and in fact, everywhere,” says Allard. In fact, 17 of the 20 highest-attended sporting events in the United States are NASCAR races, and the sport is the second-highest rated regular season sport on television. The numbers are undeniable. Americans love NASCAR. Allard decided to go beyond the numbers in an attempt to understand the infatuation.

“What’s America’s obsession with NASCAR about? I guess that question drew me in. Then the thought of on-stage races, the colorful logos and quirky commercial sponsors, the sexy race suits, and the All-American obsession with cars and competition got me hooked. It’s so theatrical. And so ‘American’.”

Discovering NASCAR’s inherent theatricality left Allard with only one option: write a play about it. Her first task here was delving into the unique world of racing. “I did massive ‘NASCAR research’. That involved busting out my daisy duke shorts and hitting a couple of speedways and a whole lot of Budweiser.” Old-fashioned racetrack fun, to be sure, but these trips to the scene went a long way towards inspiring what would become VROOOMMM!. “Many details in the play are taken from stuff I saw at the speedway—like a shirt that said ‘NASCAR—because for all the other sports, you only need one ball.’ It’s a really colorful and hilarious subculture.”

Allard also dove into books written by major figures in the sport’s history, and quickly discovered the dual foundation of her play: “I became really interested in two things: the roots of the sport—guys souping up their regular ‘ol cars to run moonshine. And second: cheating. Cheating is a huge part of such a wholesome ‘family’ sport. The drivers are always trying to stay one step ahead of the rules—doing things to get an advantage before the guys who make the rules catch on.”

True to those initial instincts, VROOOMMM! is a play about a long-time racing family and the lengths that they (and their rivals) will go in hopes of coming out ahead. But she also introduces two gender-related story elements to complicate the plot. First, the newest good ol’ boy in Allard’s racing world isn’t a boy at all—it’s Holly “Legs” Nelson, an upstart female driver. Second, all the characters in the show—Holly, all the male drivers, the announcers, fans—are played by women.

“The all-female cast idea came early in the writing of the play. I wanted to explore the stereotypes of the racing world—father and son, the young rookie, the old pro—and one way to explore those stereotypes with a twist was to do it with all women. It really opened up the play,” says Allard. “And there is an inherent social statement in that—since NASCAR is still such a male sport and a white male sport at that. It’s a way of commenting on that without having to say it all the time.”

While the social commentary is a nice side effect, the all-female casting is most successful in less high-minded ways. “It’s funnier with all women,” she explains simply. “I’ve done a reading of it with men and women and the show really lost something. I think most of the fun of this show is watching a funny group of actresses transform into a number of characters—playing the male racers, the fans, the announcers, karaoke bar waitresses, sponsors, you name it. It makes it more theatrical.”

Make no mistake: this is a wildly theatrical play, featuring choreographed karaoke song parodies, a grandmother who takes four pages of dialogue to get to her seat onstage, and not one but two separate characters in chicken suits. Allard’s stage directions allow directors and performers great deals of leeway in terms of how to execute individual moments within the play. Openness and inventiveness are to be celebrated, largely by necessity. “The first thing you notice at a NASCAR race is the noise. The sound of the engines is overwhelming, it goes right through you—they’re as loud as fighter jets.” How does a writer take that intense, visceral impact and translate it to the stage? “It’s fun to think about how you’re going to put a NASCAR race on stage. It’s a design challenge, a director challenge, and I love that—putting the challenge out there. If this show is one thing, it’s playful…it’s wacky.”

Allard’s infectious spirit continually bleeds into her work. An educator as well as a playwright, Allard knows the benefits of a positive and open approach to her art. She cites “an insatiable need to communicate…and curiosity” as the reasons why she is a writer. Whether writing for adults or for children, she feels a need to bring the excitement of the latter to the former: “I love the energy of young people and love to write young energy into my plays—it’s passion, really.”

It’s hard not to hear the echoes of the playwright’s words in the following speech from VROOOMMM! —spoken by a character I won’t name, so as not to ruin the surprise:

VROOOMMM! A NASComedy was commissioned by the Signature Theater, with support from the Commonweal Theatre Company’s new play development program. The Summer Play Festival production runs from July 10th to July 15th. Tickets ($10) and information are available at www.spfnyc.com.

Janet Allard’s plays include Vrooommm! A NAScomedy, Incognito, Fashionistas, Loyal, The Unknown: a silent movie musical (awarded Jonathan Larson Fellowship), and Untold Crimes of Insomniacs. Her plays have been produced by Mixed Blood, The Kennedy Center, Playwrights Horizons, Yale Rep, The Yale Cabaret, Access Theater in NYC and internationally in Ireland, England, Greece and New Zealand. Her work is published by Samuel French, Playscripts, Inc., Smith and Kraus, and Heinemann. Ms. Allard is a Fulbright Fellow, a recipient of two Jerome Fellowships at the Playwrights’ Center, and holds an MFA from the Yale School of Drama.

Excerpt from other work by Janet Allard

Kristoffer Diaz is a playwright whose most recent work, The Elaborate Entrance of Chad Deity, tackles another uniquely American marriage of sports and entertainment: professional wrestling.

At the Whitney Museum of American Art, Jasper Johns: Mind/Mirror starts off with such a strong installation that it’s nearly impossible to pick a favorite piece.