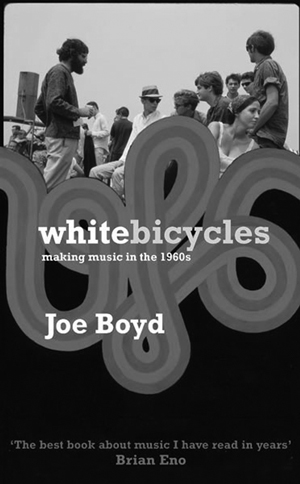 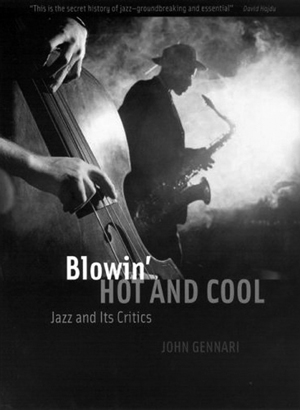 Living up to its back-of-jacket testimonials (from no less than Eno, Kate Bush, and Nick Kent), Joe Boyd’s new memoir White Bicycles is indeed a must-read, especially for those in need of a hype-free perspective on an over-discussed, over-analyzed, and over-sentimentalized era.

If not quite a household name, Boyd was a legendary producer, perhaps more for where he was and whom he knew than for what he actually did. Beginning with his triumphant quest for blues master Lonnie Johnson as a teenager, he facilitated any number of musical collaborations, record deals, and recordings during an era so wide open that it included (in rough order): a prototype Lovin’ Spoonful, the Butterfield Blues Band, Pink Floyd’s first single, the Soft Machine, the Move, Shirley Collins, the Incredible String Band, Fairport Convention, Nick Drake, Vashti Bunyan, Anne Briggs, Nico, Jimi Hendrix, Billy Bragg, REM, and (almost) ABBA.

I suspect Boyd’s contributions to these artists may have been more profound than he indicates; he’s almost a too-modest chronicler, virtually erasing his own role in any number of important recordings. (Of course it’s refreshing not to suffer the usual breast-thumping of an egomaniac out to set the record straight—see Little Richard, Phil Spector, Andrew Loog Oldham, etc.) But I constantly found myself wishing for a fuller self-portrait: What made this guy uniquely suited for what he accomplished? His brief autobiographical excursions are without exception compelling, yet he’s clearly more comfortable shining the spotlight on those around him.

This is a minor quibble, though, because Boyd is so good at capturing what went on then; and, even more important, he was of the inner circle at several key times and places, other members of which tend to be reticent, ignorant, inarticulate, inaccurate, or just plain dead.

Boyd was on the scene at Newport in ’65 when Dylan “went electric”—not just there, he was actually the sound man. He recalls being summoned by the old-guard board members—Alan Lomax, Pete Seeger, and Theo Bikel—who demanded, “You’ve got to turn the sound down. It’s far too loud.” Boyd dutifully relayed their request to the new guard onstage—Albert Grossman, Peter Yarrow, and Paul Rothchild, who, “grinning like cats,” professed their belief that “the sound level is just right,” and sealed their reply with a rude middle-finger gesture. The moment is evoked perfectly: “A Bloomfield guitar solo screamed through the night air. Dylan’s voice took up the last verse, hurling the words out into the night air: Now the wintertime is coming / The windows are filled with frost. (And, no, Pete Seeger never tried to cut the sound cable with an ax; that rumor is laid to rest here.)

Boyd’s next phase found him mostly in England, first as champion of the unheralded Birmingham band the Move (Boyd failed to win them a record deal, even though they were generally regarded as an unsurpassable live act), next as a co-founder of London’s seminal UFO club, which introduced the multi-media psychedelic spectacle to the UK, epitomized by the Pink Floyd, whose shows were attended (and carefully attended to) by Lennon and McCartney during the run-up to Sgt. Pepper. He also managed to produce the Floyd’s first single, “Arnold Layne”/“Candy and a Current Bun,” before getting shunted aside by larger, nastier fish.

In fact, Boyd’s trajectory is uncannily emblematic of his time: He’s a key player in the Cambridge/Greenwich Village folk scene; he does time in the Brill Building; he actually facilitates Dylan’s move into folk-rock; he’s on the scene in London as the counterculture blooms; then at the apogee of summer he’s suddenly far from the madding crowd, shepherding the folk/rock/psych acts he became most known for.

It was on behalf of the latter that he formed his production company Witchseason (he professes embarrassment at the Donovan connection, for which he can be docked a couple of points). Though he doesn’t overemphasize it, it’s clear that Witchseason was his way of recording the music he believed in and getting it out into the world—despite its fairly “uncommercial” nature. It’s in his dealings with ISB, Fairport, and Drake that we get our best sense of Boyd: basically a fan at heart, he has quite personal relationships with all of the bands (including one or two romantic liaisons briefly alluded to) and an uneasy relationship with the record business. The fact that he allied with Island was a stroke of luck; few would have given him the free hand that Chris Blackwell did.

Again, the stories from this period (roughly ‘67–’71) are completely new to me, damned funny, and not especially self-serving. He recounts his efforts to find the right string arrangements for Nick Drake’s songs, while admitting that after two albums Drake went and did what he wanted to with Pink Moon—simple voice and guitar—and the results were stunning. He also reveals that Drake was completely mystified, and frustrated, that his albums weren’t selling, and in general paints a picture of the artist completely at odds with his apotheosis as an ethereal, tortured soul. The stuff about the ISB is fairly priceless: For now, let’s just say that the gals were strong-willed and not overly fond of one another. The Fairport material is not nearly so gossipy, but still larded with many a treat for musos and geeks.

I was impressed with the generally low level of old-fartism; I mean, does this guy not have a right to a few “back in my days”? He touches on technical matters quite briefly (I could have used more gear trivia, myself), but when he does his opinions are well-reasoned and I agree with them completely—as when he laments the lack of spatial depth in digital recording, by recalling the way one could hear the air in front of Nick Drake’s guitar strings on the original analogue recordings. It’s true. You can.

It’s not as if Boyd retired after the Witchseason period, but he might as well have, for the purposes of White Bicycles. He mentions his involvement in a Hendrix documentary, a semi-permanent detour into film music, an uncharacteristic huge hit (“Midnight at the Oasis”), and the debut of his fine reissue label Hannibal. I would have liked more on the seventies and eighties, especially the story behind Shoot Out the Lights, Richard and Linda Thompson’s 1982 masterwork, but in the end I think Boyd chose correctly: No years are going to match the years when he was at the center of the universe, the world was young, and all was possible.

By coincidence, I’ve been making my way through a second book that touches on some of the same territory that Boyd covers. John Gennari’s Blowin’ Hot and Cool: Jazz and Its Critics traces the history of jazz criticism, something that I don’t think has been attempted yet, and that’s way more interesting than one might think. More than most American cultural institutions (e.g. baseball, film), jazz has been mediated by a stratum of intellectuals, usually at each other’s throats, almost from the beginning.

One of the first important figures covered is John Hammond, familiar as the “discoverer” of any number of great talents, from Billie Holiday to Bruce Springsteen. Both his personal trajectory and the roiling controversies he was caught up in put me in mind of Boyd and his 1960s. In an unusually revealing moment, Boyd compared himself and his friends to a group of white youths in an old engraving who appear mesmerized by African-American kids “dancing for eels”: “[We] were leaning towards a culture we sensed held clues for us about escaping confines of our middle-class upbringing and becoming male sexual beings.”

There’s that adolescent moment again: Whenever I read a book about any white person (usually male) passionately engaged in popular music in any capacity (be it Harold Arlen, Don Van Vliet, or Lou Harrison), there’s the bedroom epiphany wherein one’s own culture is rejected as uptight, vitiated, soulless, banal (you pick it), and some instance of African-American (or maybe just “primitive”) culture is embraced as key to the deeper forces of life/self/cosmos. (For me, in high school, it was Mississippi Delta blues on Yazoo Records.) Mezz Mezzrow, referenced in Gennari’s book, was a classic early example: Turning his back on his white, middle-class upbringing, he attempted to melt into the black community as a jazz musician, and it worked out for him insofar as he became a highly regarded source of killer weed.

To the manner born, cultivated, Ivy League–educated, John Hammond fell in love with African-American music and managed to forge a place for himself within it, wherein he became at once humble servant and colonial overseer.

Boyd, too, was a kind of Great White Hunter, who not only shaped albums in the studio but acted as musical matchmaker, dealmaker, arranger, Svengali. Both were way inside a counterculture, yet not truly of it.

It’s the truly liminal creatures in American popular culture—those that can cross boundaries of race, class, gender, genre—that can turn the spirit of the times into flesh. But, in a way, the Hammonds and Boyds are just as important. Here’s to the somewhat elegant, stiff white dudes who give their lives for the music they love.

The Dramaturg’s Perspective: A Conversation with Amauta Firmino

Writer Alexi Chacon talks with Amauta Firmino, the Dramaturg of Slave Play, about his work on Broadway’s most TONY nominated play in history, his dramaturgical process, and surviving as a dramaturg.