A Ground-Level View of the City 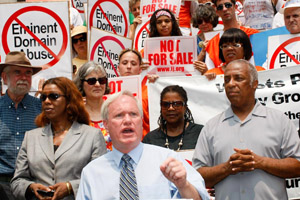 Tony Avella speaks at a City Hall rally on June 27 against the use of eminent domain to benefit private development. Photo by Jonathan Barke.

Democrat Tony Avella, a City Councilman representing Northeast Queens, is running for mayor in 2009. Prior to joining the council in 2001, Avella had a long track record as a neighborhood activist as well as community board member in Bayside. In recent years, Avella, along with Tish James and Charles Barron, has been one of the few City Council members to speak out against over-development. Among other issues, Avella has challenged the Bloomberg administration on the closing of firehouses, the developer-friendly rezoning of areas including Williamsburg-Greenpoint, and the proposed use of eminent domain to benefit private development in many areas of the city. In mid-June, Rail editor Theodore Hamm sat down with Avella at City Hall Park.

Rail: Do you think that the City Council is currently acting as a rubber-stamp body for Mayor Bloomberg and his big development projects?

Avella: Yes, unfortunately, it really is a rubber stamp for the mayor. Let me give you a current example. At the hearing I just attended on the proposed use of eminent domain at Willets Point, the Bloomberg administration was represented by the city’s Economic Development Corporation. Only a few council members expressed concern for the many local businesses that will be condemned by eminent domain. Most of my colleagues seemed to overlook the fact that the EDC has a terrible track record in dealing with local communities. Hearing them talk, you’d think there’s nothing wrong with the EDC and that it’s doing a great job.

Rail: What do you think other council members are afraid of?

Avella: A few things: one, the real estate industry controls the agenda in the city. Not me as an elected official, not my colleagues—it’s the real estate industry because they give a lot of money to local politicians. The other aspect of it is that there’s very little independence in the council because of the power of the speaker [currently Christine Quinn]. If you go against the speaker, there are ways that she can get back at you. Many members, even though they don’t want to vote for a certain bill, get intimidated, knowing that there’ll be repercussions or retaliations further down the line. For example, in 2002, when I voted against the property tax increase, the mayor refused to renew my parking permit. The speaker [then Gifford Miller] bounced me off the Rules, Privileges and Elections Committee. But to me it’s more important to represent your constituents. I think that if more council members and elected officials do the right thing, the less opportunity there is for the speaker or the mayor to intimidate you.

Rail: Tell us about the public campaign finance bill you’re proposing. Is it aimed at curbing the influence of real estate developers in city politics?

Avella: I’m in the process of putting the final touches on the bill to reform the whole campaign finance system. Right now, we do have the best public funding for elections in the nation, with 4-1 matching funds. The problem, though, is that the current system still allows for way too much influence from the real estate industry. In my bill, we’ll create a total public financing program, in which everyone who gets enough signatures will get equal funding, with different amounts for different offices. If we do this, then elected officials won’t have to worry how they vote. We wouldn’t have to go to the real estate industry for donations, for example. It would take effect in 2010, after this next election cycle.

Rail: You’re often described as a “maverick” among the city council. Do you think that term applies?

Avella: I guess it does in the traditional sense of maverick. I think of myself as an independent person. I never thought that way of myself, but after having spent four or five years in the city council I almost consider myself a revolutionary because it’s just amazing that there’s no independent thought here. People don’t vote for things because it’s the right thing to do. They vote because that’s the way they’re told to vote—or maybe they’ll get ahead politically, or maybe they’re looking for the next job. There’s very little that happens in city government because people do the right thing and not the politically correct thing.

Rail: Speaking of political correctness, what about your recent vote in favor of allowing Bed-Stuy to name a street after Sonny Carson? You were the only white councilperson to support it.

Avella: For me, it was actually a bigger issue than just about Carson. There’s a process for street names: the community board reviews it, has a public hearing, and they vote, and then it’s up to the respective council members to introduce the name as part of a larger street-renaming bill. That’s basically it. I think there were 59 streets renamed in the same bill as Carson. I dare any council member to name even ten of them. Then, Speaker Quinn suddenly decided to pull Carson’s name out of that bill and to make it a separate vote. To me that was subverting the whole process, because the local community did everything correctly. The second aspect of it is, who am I to tell the black community who they can and cannot honor? Street names are a very local issue. The community should have the right to say that “We think this person did a lot in our neighborhood and we want this street renamed.” So I voted not only to protect the process but to basically say that local communities have the right to determine who they want to honor.

Rail: Even so, it was still a bit unlikely for someone representing your district to vote for a radical black nationalist like Carson, yes?

Rail: If you were elected mayor, how would you counteract the overdevelopment seen in many neighborhoods during the Bloomberg years?

Avella: Well, first of all, we’ve got to do a comprehensive re-do rezoning in the city of New York. We need to make sure that we accurately reflect the residential character of the neighborhoods. At the same time, we need to work with neighborhoods and communities to see where development can go. We need to eliminate all of the illegal construction and put some real teeth into the problem of the Department of Buildings. That agency is in total chaos. I mean, if you are a homeowner and you do the simplest little thing wrong, they’ll come down on you like a ton of bricks—but developers get away with anything. We also need to take control of the little-known, quasi-judicial agency called the Board of Standards and Appeals, which is made up of five commissioners appointed by the mayor who really have almost total power, but there’s no oversight of that agency whatsoever,

Rail: And no one really knows what they do.

Avella: Exactly. No one knows what they do, but they give the variances that allow the developers to obviate any part of the zoning codes. It is amazing to me that they’re supposed to have five criteria by which they approve of a variance, but they really can do whatever they want. For example, a developer buys a piece of property and goes to the Board of Standards and Appeals. He’ll tell them, “I can’t build a 12-story building on it because the zoning’s different” or “I paid too much money for it and the only way I can make it back is to build a 12-story building.” And they’ll give him the variance. It’s insane. In addition to changing this process, my other main plan regarding development is to go out in every neighborhood and do comprehensive planning. In every neighborhood, community leaders will get together and determine what’s wrong or what’s right with their neighborhood now, what needs to be done, and where they’d like to see their community five, ten years down the line. Those plans would get put together into borough-wide documents, which would be compiled into a city-wide document that becomes the planning blueprint for the city.

Rail: That sounds like the community board plans, or 421As, except that those are non-binding.

Avella: Right, in the process that I’m outlining, the community plans become the city’s plan. What we’re going to do is come up with a whole new way of planning—instead of doing it from the top-down, we’ll do it from the bottom-up.

Rail: Do you think that running for mayor as a sensible development candidate can be a winning strategy? The developers will fight you every step of the way.

Avella: I think it can be. I’m a common sense type of person, and I’m also a good government person. Not only do we need to restructure how we do planning, we also need to restructure government so that it pays more attention to the individual needs of all New Yorkers. We have to clean up city government and make it more ethical. If I can get that message out, I think there is hope. If you ask the average New Yorker whether he or she thinks the city’s going in the right direction, they’ll probably say yes. But then ask them what their personal experience has been in dealing with city agencies in their neighborhood and you’re going to get a totally different perspective. I hear it all the time: “I called 311, I can’t get a pothole fixed,” “I called my local precinct, they don’t respond,” “I couldn’t go to my local library until we finally got six days a week service.” People are not getting the services they ask for and I think that’s the basis of a campaign that can be won.

Rail: So in a sense, you’re running a different sort of quality of life campaign.

Avella: Yes, it really is a quality of life matter. I don’t understand why we can’t be a city that takes care of its own citizens and listens. I think that’s one of the faults that government has. We don’t listen. We tell people what we think is in their best interest. That’s the reverse of what it should be. We should be listening to city residents and doing what they want. I’m a neighborhood guy with a long background as a civic activist. We’ve had a mayor who is a billionaire businessman, and we’ve had career politicians—why not try a civic activist?