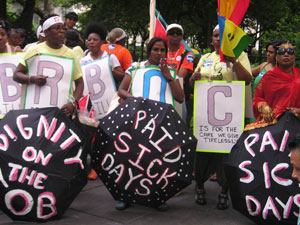 Photo courtesy of Jews for Racial and Economic Justice.

Diane B. came to the U.S. from Jamaica in 2000 wanting what every immigrant wants: a well-paying job with healthcare benefits, paid vacation, and regular hours.

What she found was quite different. As a nanny and housekeeper for a Dix Hills family, she says she was subjected not only to verbal abuse, but was forced to work ridiculous hours and assigned more chores than anyone could possibly complete in a single day. “I had to take care of everything in this huge house, including three dogs and a seven-year-old child, plus arrange play dates, clean, shop, iron, and prepare the food,” Diane reports. “They wanted me to say, ‘Dinner is served,’ like in a movie. I was getting crazy in that house.”

Although the 44-year-old Flatbush resident left the job after six months, she says she still shudders to think of it. “I couldn’t go to bed until they went to bed,” she continues. “I had no public holidays off, and I was not paid for sick days.”

Diane now has a better job, her fourth in seven years, with a more compassionate and respectful employer. But while this is clearly a step up for her personally, she knows that conditions for domestic workers should not have to rely on luck. What’s more, she believes that standards—on everything from salaries to vacation benefits, sick time, holidays, and health-and-safety—should be imposed by the state, guaranteeing that this essential workforce is protected.

Diane’s convictions led her to Domestic Workers United (DWU), a coalition of more than 1500 Caribbean, Latina, African, and African-American domestic workers, two-thirds of whom live in Brooklyn. Their mission is to organize the approximately 200,000 people—93% of them women and 99% of them foreign-born—employed as nannies, companions, and housekeepers in the New York metropolitan area.

The centerpiece of DWU’s campaign is a Domestic Workers’ Bill of Rights, legislation intended to standardize the employment practices governing domestic labor. The organizers’ fight is made difficult by federal safeguards that explicitly exempt domestic employees. The Fair Labor Standards Act, for example, establishes the minimum wage and regulates the number of hours one can work before overtime kicks in. For unknown reasons, FSLA excludes “casual” workers, a category that encompasses those who care for young children, the elderly, and the disabled. Similarly, neither the Occupational Health and Safety Act nor Title VII of the Civil Rights Law or the Americans with Disabilities Act includes domestic workers.

DWU has the support of dozens of labor unions, community and religious groups, and such lawmakers as state Labor Commissioner M. Patricia Smith and Brooklyn Assemblywoman Yvette Clarke. Its multifaceted approach to organizing serves to both embolden DWU members and involve the community in their struggle for workplace equity. Toward that end, DWU offers educational programming—classes in how to use a computer as well as in CPR, child development, child psychology, English, and leadership and negotiation skills—and has brought workers and their allies to Albany to lobby in support of the Bill of Rights. The group has held marches and rallies to publicize its campaign and has sponsored Town Hall meetings to give members a forum in which to denounce the indignities they have experienced.

DWU has also teamed up with the Data Center, an Oakland, California-based social justice research group, to conduct empirical studies about domestic employment. One study, “Home is Where the Work Is,” was released in 2006 and found that:

Half of all domestic workers spend between 50 and 60 hours a week on the job;
More than two-thirds, 67%, have never received overtime pay;

33% have been verbally or physically abused by their employer; and

“We’re living in the shadow of slavery,” says DWU activist Barbara Young. “Most domestic workers are immigrant women living and working in the U.S. because neo-liberal globalization makes it impossible for us to stay in our home countries.”

Young sounds like an erudite political economist and is clearly in her element when speaking to a large audience. At a packed Town Hall meeting in June, her words resonated with the cheering crowd. “We do the work in the home that makes it possible for professionals to enter the corporate offices, the law offices, the financial centers. As New York develops into a global city, the need for our services will continue to grow. We are fighting for a bill that will set things right for the work we do. The history of racism and sexism confront us every day, but DWU has proven that it is not impossible to organize domestic workers even though we’re isolated and vulnerable.”

Beatriz Garayalde, speaking in Spanish at the same Town Hall meeting, says that she put up with 18-hour workdays because she loved the children in her care. Still, after several months of non-stop toil, when she asked her employers about the English classes she’d been promised, the response floored her. “I was fired,” she says. “They didn’t even ask if I had a place to go. When one lives and works in a home and has nowhere else to live, it creates the conditions for abuse.

Few know these conditions better than Estelle Ng’Ambi, a tall, thin woman with a head full of curls. Originally from Zambia, Ng’Ambi’s first employer was a Westchester County tennis instructor. For 19 months she worked from 6:00 a.m. to midnight, for a wage of $250 a month.

“I was supposed to care for the son and two adults and do the whole family’s cooking, cleaning, shopping, and ironing. I’d have to scrub the bathrooms, always cleaning up their mess. I slept on the living room floor, behind the couch, with one pillow and one comforter. In the summer it was so hot, but I was denied using the air conditioner. In winter, it was cold.”

Compounding things further, her boss kept his computer in the living room and would use it at all hours of the night. “I had to wear clothes all the time because I did not want him to see me,” Ng’Ambi adds.

Yet as bad as many bosses are, some have joined DWU’s campaign for justice. Jews for Racial and Economic Justice (JFREJ), an active coalition partner, has worked tirelessly to raise consciousness among those who hire domestic workers and their efforts have begun to pay off.

Yehudit Moch, a resident of Kensington, has someone clean her home once every two weeks. “For me, this is at the nexus of the personal and the political,” she says. “It’s about how we live our lives and how we actualize our beliefs.”

Moch has lobbied Albany in support of the Domestic Workers’ Bill of Rights and sees the bill as benefiting both employees and employers. “As employers, we often want to do what’s right but it is not always clear what right is. The bill will give people standards to follow.”

As written, the Bill of Rights promises:

A living wage of $12 per hour, increasing to $14 an hour by 2010;
Employer choice to either provide health coverage or a wage supplement;

Time-and-a-half for every hour over 40 worked;

One day off per seven-day calendar week; and

Advance notice of termination and severance pay in accordance with the number of years worked.

Carolyn Batzdorf, a member of JFREJ from Congregation Kolot Chayeinu in Park Slope, is a mother of three who works part-time outside the home. Although she says that she treats her babysitter and housecleaner as she would want to be treated, she believes domestic workers deserve system-wide protections. “Imagine the havoc if 200,000 domestic workers did not show up for work for one day,” she quips.

Yes, imagine going into the park and not seeing babies and toddlers being tended by nannies and au pairs. Harlem Assemblyman Keith Wright calls domestic workers the “backbone of the economy” and is pushing his colleagues to support the Bill of Rights.

“We are psychologists, nurses, teachers, chefs and superwomen,” DWU member Barbara Young says. “But we also know that Mary Poppins was fictitious. Our campaign is about the future of New York. Our vital work makes all other work possible for the city’s professional families. It’s time for it to be respected.”

DWU’s Brooklyn meetings are held once a month at the Lafayette Avenue Presbyterian Church. To find out the schedule, call 718.220.7391 ext. 11 or email [email protected]

Sometime around 1914, the American composer Charles Ives outlined a daily schedule for life at his Redding, Connecticut home in a diary called “Our Book” that he shared with his wife, Harmony. By 6:30 am, Ives was “up & at them,” followed by chores and then a quarter-of-an-hour playing Bach.