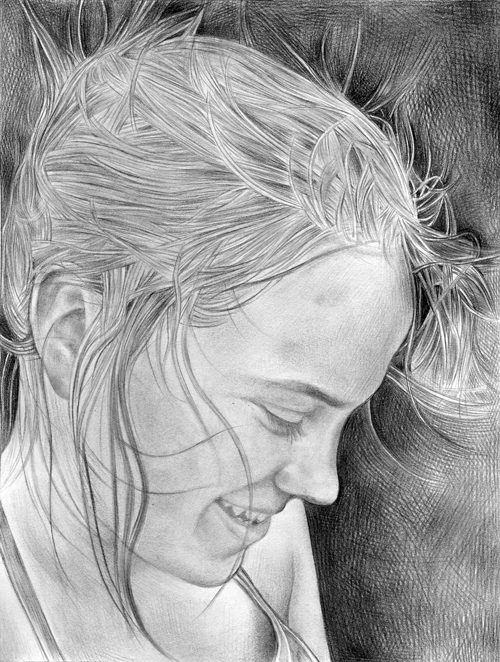 Portrait of Sabrina Seelig. Pencil on paper by Phong Bui.

She sang beyond the genius of the sea. —Wallace Stevens

But when you left, a strip of reality broke
upon the stage through the very opening
through which you vanished: Green, true green,
true sunshine, true forest.
—Rainer Maria Rilke

One could describe Sabrina to those who never met her as a J.D Salinger character, a brilliant precocious individual. A true New Yorker who loved the city and its people unequivocally, with an enormous appetite for life, she directed her energy to describing her adopted home. Wherever she was, she wrote about it. When she shared the manuscript for her novel, we saw depths of imagination that couldn’t be visualized just from knowing her. She graced each friend and family member in an individual, separate way, though with the writing it was all there.

As we came to know others in the close circle of people she had touched, we would hear stories: people who knew the sound of her snores; who saw her change clothes; who traveled with her; who said I love you; who taught her about specialty teas when she was seventeen. And she would give us her own accounts—of falling asleep on the 3 a.m. train to her aunt’s apartment in Washington Heights, where she lived for a time. We had never seen her sleep. She was so alive at night, drinking and smoking like an old bluesman, when the music was good, and before they knew it was bad for them. At first wary of a 21-year-old who seemed to already have lived two lifetimes, we were soon overcome with respect and admiration for Sabrina and the way she lived her life—with discerning openness.

Sabrina’s room felt like it had been lived in for a hundred years. We later learned that this is how her room in Maine was too, the place where she grew up. How could one not be overwhelmed? Those deliberate nooks and crannies won my attention completely as I leapt from corner to corner: The red words upon the black words taped to walls (her editing tact); the simple bed from which she said, at first wake grabbed is one book from books upon books stacked in piles. She could find those blindly—her eyeglasses were forever lost, rediscovered again and again in tiny antique shop drawers.

In the hospital she lain. As we watched her sleep, she gave us a day to whistle and sing songs into her ears. That night my heart was high and my skin slept deep. We considered the fact that we’d drifted out of touch over the past eight months, but that we had caught glimpses of her growing. Then, creeping through the doors the following days, we understood she was going to pass away.

There is an impulse to romanticize an early death of a person who still had much to do. It’s comforting to think in terms of real tragedy, in the Shakespearian sense, that things are meant to be. And then to think of her having tea with Virginia Woolf, inhabiting all the places she was fascinated with that manifested her sensibility (her writing, her dresses, the way she read aloud).

But she did have so much to do. This is a time not for closure, no funeral, no headstone. She is seen in a floating temple lit by candles, in a house on a lake, in a train across Siberia, and in so many books.

It does not seem important what is said now because there will always be more to say, and it will always surface in some way.

Or That, Or That, And That…

I met Sabrina Seelig through her friend Erin Durant, another Rail member who had mentioned Sabrina was interested in becoming involved. It was nearly two years ago. I clearly remember the day she came in the office on a beautiful sunny Tuesday afternoon at about 3 p.m. It was a surprise visit since Erin didn’t forewarn me that she would bring such an enigmatic personality—part Virginia Woolf incarnation, part late Victorian/post-modernist arguing machine. Soon after we were introduced, she went into her offensive mode, framing all the possible ways to declare that Woolf’s To The Lighthouse should be regarded as a better work of fiction than George Eliot’s Middlemarch, just because she saw the book sitting on my table and had read it for the first time a week before. As a nice guy like me, who went through the war in Vietnam and spent time in a labor camp, I didn’t really deserve such sudden attack. It was like the Tet Offensive of 1968 all over again, and it went on nearly just as long. Can you imagine, I was just in the middle of trying to finish a grant application for the Rail, and didn’t quite expect such an ambush.

At any rate, it was as though it was game 5 of the 1993 NBA Eastern Conference Finals between the New York Knicks and the Chicago Bulls, when the Knicks lost because the power forward Charles Smith didn’t dunk the ball; instead he tried three lay-ups under the basket and got them all blocked by Scottie Pippen. As a consequence, I lost 15 bucks to a friend. Obviously, I didn’t want to lose the argument to this 21-year-old who I hardly knew. I remember trying to think quick on my feet—how I could get out of this situation? Out of self-defense, I turned to my good memory. I began my counter-attack with actual facts, exact dates, names, events and so on. I said, “Without George Eliot, don’t you think that it would be hard to imagine the mature work of Virginia Woolf? It wasn’t because Woolf was the daughter of the Duckworth publishing family and Sir Leslie Stephen, or that both of her parents were close friends of George Eliot, or that her father’s first wife was the daughter of William Makepeace Thackery, or that his daughter from that marriage was institutionalized for mental illness. And that Woolf herself declared that Middlemarch was one of the four English novels that was written for grown-up people. So things are more complicated than you think.”

I don’t think this sat well with her, so I told her that Ingmar Bergman’s Wild Strawberries has similar affinities to Woolf’s To The Lighthouse. Then I went on to suggest that she should read Woolf’s biography of Roger Fry. A week later she came back and gave me a big kiss and said, “It was boring.” Then I again had to work harder, and the argument resumed. Sabrina never gave up her feistiness, defiantly exhausting me at all times. However, I soon realized that we were benefiting from each other. While she picked my brain for further intellectual knowledge, it was her endless questioning that “kept me real,” as they often say.

It was Sabrina who adopted me and the rest of us, a group of idealists who share with her a social belief that we can change the world for the better through our commitment to the growth of culture. How she lived her life, and how she expressed her worldview as a writer and, as a friend of Jan’s called her, an “Integrity monster,” is not only a true testament of our collective, but has affected me so deeply that if I don’t come back in the next life as a 6’10” power-forward in the NBA (probably playing for the Knicks to make up for what Charles Smith failed to do) I’d come back as Sabrina Seelig.

On behalf of us at the Rail, I want to send our deepest love and condolences to her close companion Jan Baracz, her parents Warren and Sherrie, her sister Ashley, her two aunts, her uncle, her grandmother, her extended family and friends. We shall miss you greatly, Sabrina.

A Tribute to Marty Greenbaum

He was a real New York street guy who often disappeared from the downtown art world to live the straight conventional life of teaching high school kids. When the semester would be over Marty would reappear like a perennial flower and rejoin his art friends. Marty, a moving target of energy, fast-talking, mumbo jumbo, words spilling out and landing in your face, aggressive and confrontational he was always challenging you to think fast and to respond to his sometimes outrageous remarks.