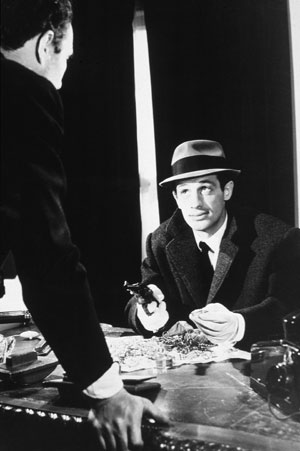 Le Doulos begins with a statement central to the unyielding world of noir ethics, “One must choose. Die…or lie.” Director Jean-Pierre Melville immerses us in the action from the get-go and, as is his style, explains nothing. We follow a solitary man on an anti-Night and the City riverside walk. Unlike Dassin’s unidentified sweat-drenched sprinter, our stranger walks slowly and deliberately, propelled by a dramatic score, jarring shadows and impressionistic clouds of smoke. His destination proves to be the suburban Parisian version of the house from Psycho. At this point we realize shit’s about to go down. Only it doesn’t, at least not immediately. After a disarmingly congenial and protracted meeting with the kindly owner of the creepy house, our man shoots right him through the heart.

Once we’re able to assemble the details, the story proves classic noir. Our night stroller, Maurice, is fresh out of jail. Gilbert, the kindly old man Maurice shot for no apparent reason, murdered Maurice’s girlfriend while Maurice was in the pen. Gilbert feared the girl might squeal. Now that Maurice has settled the score, he can set his sights on tomorrow’s heist—a job that will redeem all his years in the slammer. Enter Silien. Silien (Jean-Paul Belmondo) is a dandy sadist in counter-point to the barely restrained melancholia of Maurice (Serge Reggiani). A rumored police informer, but nonetheless a close friend to Maurice, Silien brings the gear Maurice and his accomplice Remy need to pull off their heist the following afternoon.

The story seems to end as soon as it begins. Within the first twenty minutes we get close ups of Maurice’s puppy dog eyes and nervous tics, a little bang-bang, and multiple warnings about Silien’s suspect trustworthiness from Maurice’s new pouty-cheeked girlfriend Therese. Maurice doesn’t care. He responds to cautionary warnings about Silien’s alleged ties to les flics with the stoic, “Silien is my friend…until proven otherwise.” Melville doesn’t make us wait very long for Silien to live up to his stool pigeon reputation. As soon as the job begins, Silien calls the police inspector. No worries, however. Melville has a switcheroo planned for us, two hours hence. In the meantime, now that Silien is a proven fink, we watch Maurice’s campaign to track down the squealer and Silien’s rampage of fighting and fucking.

Le Doulos shows a director in transition. Born Jean-Pierre Grumbach—he adopted the name Melville as a tribute to author Herman Melville—Melville fought in the French Résistance during World War II. His time in the Résistance has undeniably shaped his oeuvre, which can be split by critics into “résistance films” and “policiers.” After the war Melville, with no prior professional experience, sought work in the film industry and was denied an assistant director’s license. Undeterred, he financed and shot his own films on real locations, which earned him the moniker of France’s first “independent” filmmaker. Melville’s double-helix of outsiderdom—Jewish heritage in the face of WWII and lack of professional training as a filmmaker—enables him to portray sub-cultural groups with real-life vitality, and with an outsider’s contempt for sentimentality.

Le Doul is French slang for hat. In the milieu (the French underworld) Le Doulos refers to a squealer or informer. It is fitting that Melville, with his hawk’s eye for mise en scène and deep affection for the accoutrements of genre, would choose this title for his first gangster film. Although he described the film as a comedy of manners, Melville flirted with the gangster/noir genre in Bob Le Flambeur (1955). Bob Montagne (Roger Duchesne) encapsulated many of the attributes of a typically French noir anti-hero. Bob is plagued by the past and worse for the wear, but he still has the will to finish the job. He ‘s only got enough left in him for one last heist, after which he will “cash out.” Any time a gangster says he is going to cash out we know he’s doomed. Aging noir anti-heroes always go for the last job that will let them quit while they’re ahead (think Jauques Dassin’s Rififi), but their striving to transcend their social class is the hubristic longing that reinforces the maxim that losers always lose.

Le Doulos shares some of Bob Le Flambeur’s light-heartedness and predates the distilled existential dread of
Melville’s masterpiece Le Samourai. Melville’s characters have not been pared down to the point where style is their sole mode of existence. Maurice has a touch of ye olde self-loathing, but he hasn’t quite reached the end of the noir spectrum wherein he might consider himself barely human. Silien toes the line of style and substance. He can show frightening brutality, but considers himself a “good” man, as seen by the middle class home he built for himself, and his genuine affection for his old flame, Fabienne. The role was made for Belmondo. A god of the French New Wave, Belmondo’s slack-jawed arrogance and deeply felt don’t-give-a-shitness oscillate between lechery and unspeakable cool in a matter of seconds.

Unlike Belmondo’s performance, Le Doulos suffers at times from its inconsistencies. The pacing can be incomprehensible and if you as much as blink during one of the drawn-out interrogation scenes, you’ll miss a key plot-point. Depending on one’s mood, the combination of noir thematics and visuals with corn-ball comedic flourishes is either grating or hilarious. In one especially harrowing, abusive scene, Belmondo turns off his own theme music, which plays on a radio on the coffee table. Later in the film, Silien and an accomplice recount pushing a car over a cliff in a scene evokes the self-awareness of Truffaut’s Tirez Le Pianiste.

Much of the action in Le Doulos unfolds at a coy distance and, as in all Melville’s films, style is paramount. Belmondo’s charm and a groovy jazz score keep things moving. What the film lacks in pacing and plot—remember, Melville is not renowned for his dialogue—it makes up for in visual story telling. Landscape and mise en scène underline his characters’ loneliness, moral ambiguity, and desolation. Stephen Schiff astutely observes that in Melville’s films, “Genre is destiny and ethics.” Melville utilizes all of the genre touchstones—heavy shadows, trench coats, pistols, abandoned lots, foxy women (note Therese’s rockin’ outfit and Fabienne’s dramatic eye makeup) and, of course, Melville’s favorite, hats.

Moral ambiguity and the fallibility of objective truth and memory are central Melvillian themes. Belmondo’s Silien is a complicated character, simultaneously impish, charming and calculatingly cold. His motivations often seem compulsive, which makes sense when one learns that Belmondo was allegedly unsure of his guilt or innocence until he saw the final cut. The very concept of guilt and innocence is completely clouded in the film. Silien repeatedly refers to Maurice as innocent of the crimes that we watched him commit. Essentially, Maurice is innocent because he adheres to the gangster model of conduct. Despite his lawlessness, he follows the rules of the game. There are two, but in the end we ultimately do not know which one betrays.