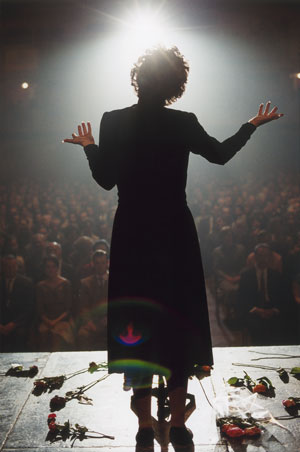 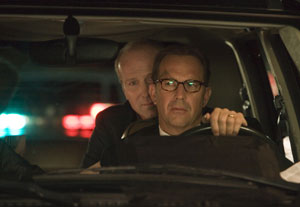 What does legendary singer Edith Piaf have in common with a secretive guy who murders innocent strangers for thrills? Both are hostages to their own dark sides, according to two films that use addiction as a shorthand way to pose a fundamental question: is it possible to become a better person? Can any of us really change who we are?

Piaf’s compulsive appetite for booze, morphine, and men is front and center in La Vie en Rose, director Olivier Dahan’s hyped-up valentine to the fabled chanteuse. Filmed in jangling color and dominated by star Marion Cotillard’s frantic, sharp-elbowed impersonation, this American-style hagio-pic bounces back and forth ADHD-ishly through the singer’s short life to show us the grim childhood that preceded her emergence as France’s beloved “Little Sparrow” and the sad end she came to.

The genetic deck was stacked against Piaf, whose parents were addicted to both alcohol and show business (her mother was a singer, her father a circus contortionist). Nurture didn’t do much to counter nature; little Edith—played by a series of sad-eyed waifs—was abandoned by both parents and spent much of her childhood in her grandmother’s brothel before heading out to the streets herself. Rather than turn tricks, she claimed, she sang songs for spare change.

I’ve only seen the real Edith Piaf on YouTube, but I question whether she was really as twitchy and goggly as Cotillard’s version of her. The singer was hooked on liquor and morphine, after all, not crank. But the actress gets bonus points for her very convincing lip-synching to Piaf recordings, with their from-the-belly blare and terrific uvular trills. (Unfortunately, subtitles aren’t offered for most of the songs, denying the non-French-speakers in the audience a significant layer of meaning.)

The movie skips over some of Piaf’s professional ups and downs, most prominently what she was doing during World War II. (There’s still controversy about whether she was a collaborator or a covert supporter of the Resistance. Most likely she was both.) We do see Piaf singing to rapturous audiences, intercut with scenes of her a few years later, wizened, balding, dying of excess and cancer, only 47 years old.

We’re given a million reasons to pity Piaf but little insight into the one genuinely interesting thing about her: not her grotty upbringing or her painful death, but her music. The real-life Piaf was clearly an artist as well as an artiste. But La Vie en Rose never grants her that degree of personhood. She has no ambition beyond the next drink and sings like a bird, that is, purely as a kind of biological necessity. We see what artistry she possesses being imposed on her by a mentor who, like the pimp he has displaced, knocks her around to get her to do as she’s told.

What makes change so difficult is that it requires seeing ourselves clearly, an almost unbearable task. Hence the advantage of “hitting bottom,” of reaching a point where reality rips at least some of the veils from our eyes. Even if Piaf herself never enjoyed such a moment of clarity, this would be a far better movie if it admitted she had some say in how she lived her life, that she was more than haplessly pathetique. As La Vie en Rose rambles on, it resembles more and more the boozy confession of a tedious old barfly explaining why she just couldn’t help it. The old Alcoholics Anonymous saw comes to mind: “Poor me, poor me, pour me another drink.”

By contrast, the lead character in Mr. Brooks knows he has a monkey on his back and would like to think he’s trying hard to shake it. Brooks is a respected businessman, a philanthropist, a good husband and father, and he’s played by that paragon of good-guyness, Kevin Costner. But the film opens with Brooks earnestly reciting AA’s Serenity Prayer (“God grant me the serenity…”) and trying to convince himself to stay clean.

His jones is incarnated in Marshall, a seductive alter ego juicily played by another aging all-American, William Hurt, who urges Brooks to quit being such a pussy. “You’ve been a good boy for a long time,” he rasps. “You know you want to do this.” “This,” it turns out, is butchering a pretty young couple on whom Brooks, for all his talk of being good, has apparently had his eye for a while. Soon he’s writhing in ecstasy over their naked corpses.

Much of Costner’s considerable charm has always resided in the fact that he looks a lot like a penis. Not the sort of one-night-stand schlong incarnated by Casino Royale’s Daniel Craig (whose face and body are so priapic he makes Joe Camel look like a guest at Judy Chicago’s “Dinner Party”), but a cuddly, domesticated phallus. Here that quality of sweetly earnest, um, uprightness, makes him weirdly plausible as simultaneously family man and blunt instrument.

In the course of his latest murder, Brooks slips up—“Perhaps I want to get caught,” he mutters—and he’s spotted and pursued by an oafish wannabe (a niftily repulsive performance by comedian Dane Cook). A hard-bitten policewoman (an appropriately sour-looking Demi Moore) is also on his trail. Will Brooks elude his pursuers, or find redemption at their hands?

This is a mighty interesting take on the standard addiction/recovery story, complete with a cute family-disease angle. But despite its shadowy stylishness, sexy soundtrack, and nicely timed jolts, Mr. Brooks ultimately disappoints.

I’m not complaining about its lack of realism—this is a serial killer movie, after all, and the genre more or less requires plot holes, coincidences, and outright impossibilities. But for the premise to hold water—for the addiction metaphor to carry any oomph—Brooks has to feel genuine anguish about what he’s doing and real fear of getting caught. That never happens.

Instead, he’s a criminal mastermind right out of the comics, able to run rings around the police while heading a successful business and being named “Man of the Year.” Everyone he kills on camera deserves it one way or another, at least by the logic of thrillers, which holds that having sex in front of an open window is a capital crime.

The movie, like our culture, is itself too hooked on the image of the godlike killer to allow its protagonist to be a genuine addict, because that would require watching him truly suffer. By not allowing Brooks that pain, the movie denies him the possibility of changing. While La Vie en Rose insists on depicting its subject as the helpless victim of cruel fate, Mr. Brooks wants us to see its protagonist as a sensitive Uebermensch to whom the normal rules do not apply—and these are, after all, just the two poles of the addict’s willfully delusional self-image.

How interesting can Piaf’s story really be if it’s presented as merely a voyeuristic catalogue of despair and dysfunction? And what drama can there be in Brooks trying to get straight when his cinematic Higher Power loves his habit even more than he does?

On an occasion engraved in my memory, the Dean of Arts and Sciences at Brandeis University (himself an architect of the “Strategic Hamlet” program in Vietnam for the US Army) reproached Professor Herbert Marcuse at a faculty meeting for having spoken at an anti-war rally: It is an intellectual and academic duty, he argued, to acknowledge both sides of disputed issues. Marcuse rose. “What,” he asked, “is the other side of the argument about Auschwitz?”

The sides of the paintings are commonly seen as trivial and frivolous. Painting them could be considered unsophisticated; they simply are not an important part of the work. Sides are usually covered with a frame or left bare, with the remnants of the artist’s process still visible.

What makes this book readable, despite the weight of the questions it raises, is Nora’s voice—the consistency of her humor, cleverness, and charm. Though including the perpetrator’s point of view feels at first Lolita-esque, the novel’s overall perspective stays satisfyingly decentralized from his disturbing, first person account.