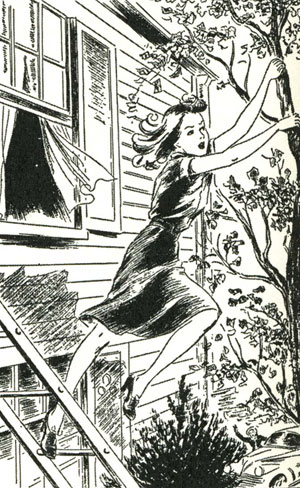 Nancy Drew has always been better in concept than reality. Young girls read into her all sorts of characteristics she only winks at having: sage wisdom beyond her years, an even temper when harassed, a smart mind and a faultless tongue, and above all, overwhelming freedom and independence. The women these readers become remember Drew with a fondness they don’t grant their real-life role models. So, Nancy Drew endures, and is continually resurrected to provide moxie-modeling to new generations of girls. With each resurrection, the rotten triviality at her core is laid a little more bare. Her fans apologize for the overt racism, misogyny, and stupidity prevalent in the early books, and ignore the racism, misogyny and stupidity that remain fundamental to the franchise. En masse, her fans (myself included) edit Nancy Drew as much as any of the ghostwriters working under the name Carolyn Keene ever did. When watching Nancy Drew, we become partisans in a protracted war against her creators for the legacy and meaning of the girl detective.

The first three Nancy Drew novels were outlined as a group by the editors at the Stratemeyer Syndicate (who also created the Hardy Boys/Dana Girls, and every other white bread serial of the day) and then sent to a journeywoman writer for fleshing out. The book packaging company, as they called themselves, was every bit as nefarious as their name and mission suggest. But that’s not Nancy Drew’s fault, and over the past 80 years, she does keep earning top place in the very small canon of tough heroines for teenage girls.

The newest actress to play Nancy is the doll-like Nickelodeon star Emma Roberts. She appears onscreen popping out of a wardrobe, daintily sneezing. She’s so young and so tiny it’s like watching a grade schooler play a game of “Nancy Drew.” I root for her, though, and by the end of the film, despite how horrified I am by its weaknesses (the plot is incomprehensible, the dialogue dreadful, every villain is a Jew, there are fewer than five speaking lines delivered by non-white actors), I admire her and hope the girls in the audience emulate at least some of Nancy’s spunk.

Nancy Drew places its heroine in high school, because these days that’s where 17-year-old girls have to be. But Nancy doesn’t belong there, both in the movie and at large. Her best adventures were those that sent her at a moment’s notice to infiltrate a “nature cult” or jaunt off to Buenos Aires. At her inception, Nancy Drew was already done with school. She had no job, no interest in college, and a generous allowance from her doting self-absorbed, single father, the town lawyer Carson Drew. As times changed, that depiction seemed less like an independent woman and more like a kept one. So Nancy went back to school. She has ping-ponged back and forth from high school to
college ever since. But her father has become ever more the boss of her.

The film begins with the Drews moving from their fictional small town to Los Angeles. Carson, leaning heavily on the phrase “my little girl,” tells Nancy that L.A. is a town far too dangerous for a little girl like herself to play sleuth. In previous Nancy Drew lore, father and daughter were equals in all but the checkbook. Carson would (somewhat creepily) squire his daughter as a stand-in date, but now he underestimates her in predictable fashion. It would be easier for him to be a good breadwinner, he says, if Nancy would focus more on shoes and less on righting societal wrongs. His fatherly advice blends the line between paternalistic and misogynistic, but he’s a cagey target because Tate Donovan makes a wholly loveable Carson Drew—Atticus Finch without all that pesky injustice. His vacant gaze, which has made Donovan such an insufferable villain and love interest, now only reminds how non-threateningly handsome the actor is. He charms the audience while he disempowers Nancy. Watching his dreamy blandness, everyone old enough to know better can just ignore that this is a gender struggle masquerading as a typical father-daughter dynamic. Who is this guy to tell Nancy-fucking-Drew she’s only playing at detective, and to go flirt with boys and shop instead? Rather than celebrate her intelligence and fearlessness, he locks Nancy in a tower, Rapunzel style. Which has its own internal logic; in her eighty-year existence, Nancy Drew has morphed into a fairy tale character. She clings to old-fashioned morality and etiquette and acts with royal entitlement, asking impertinent questions while handing out sweet treats.

Nancy Drew is our American princess, which makes it hard to see her reduced to lunchroom politics, and without her ladies-in-waiting girl gang of Bess and George. Her longtime girlfriends have been replaced by a 12-year-old runt with a bad Nancy-crush. In the film, every female character is diminished, in one way or another. Nancy never had a mother, since only a terrible mother would let her daughter be involved in so much gunplay, and no hero’s quest commences with a terrible mother. Nancy keeps talking about the dead mother she never knew, as though this loss explains and excuses why she doesn’t act like a girl should. Every female shown other than Nancy is a victimized mother, eccentric spinster, or petty rival. Generations of women have learned from Nancy, Bess, and George that girls can dream, and think, and act. Now they see that girls can’t, but Nancy can. Outside of the fantasy land of River Heights (where Bess and George remain full of moxie) a powerful girl remains an aberration. A circular argument arises: girls like to shop, Nancy would rather sleuth, Nancy isn’t really a girl. And it’s true: Nancy isn’t really a girl. Even after hundreds of books and films devoted to her, the character barely feels human.

When Ned Nickerson, her timeless love interest, appears driving her beloved roadster, Roberts exclaims, “I’ve missed this car so much…and I’ve missed you too.” For one moment Roberts shows Nancy giddy, and then catches herself when she realizes she’s given her big secret away. She isn’t real enough to feel for anything but her mysteries. And her car.

At the coda of the film, two of Nancy’s former rivals come barreling into her room, giggling. Nancy has become a fashion plate, her retro-style shown in a teen magazine under the headline “The New Sincerity.” It has to be an ironic joke. Nancy Drew has never been sincere. The franchise has always been tainted by its own pandering to American prejudices, and redeemed by a completely dishonest notion: a girl can outrun, outfight, and outthink the male adult world, and be adored for it. It’s a lie I still rely on, and Nancy Drew’s still the only heroine teaching it.