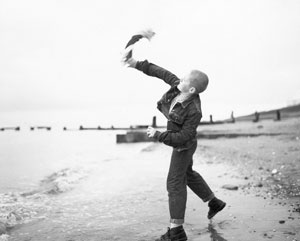 With opening credits that channel-surf from popular icon Roland the Rat and deteriorate to another British Muppet—Margaret Thatcher amid the Falklands War—This is England leaves little doubt that it’s going to be a bumpy ride in the United Kingdom of the eighties.

Revisiting director Shane Meadows’ familiar turf in the Midlands, this semi-autobiographical feature follows a relentlessly bullied pre-teen Northerner, Shaun (gifted first-timer Thomas Turgoose). Shaun’s dad is a casualty of the war with Argentina and Shaun is on his own. Clad in bell-bottomed leftovers from the seventies, this young hard nut battles all age and sizes that dare to slag the memory of his deceased Dad. Upset, bruised and limping home, Shaun is welcomed in by Woody and Woody’s gang of mixed-race skinheads, throwbacks from the origins of the movement and their ska/mod background. Initiated into the gang, sporting a new pate and wearing the requisite Ben Sherman and Doc Martens, Shaun enjoys the spoils of uniform: wine, song, smokes and awkward heavy petting.

The return from prison of Combo (Snatch’s Stephen Graham) forces a split in the gang’s direction. Combo, expounding his National Front and Oi! Culture opinions and a selective racial hatred, wants to terrorize the local non-nationals. Woody wants the peaceful life. Shaun, the gang’s youngest member, and Milky, the gang’s sole black skinhead, follow Combo and it’s so long Happy Ever After in the North.

Since the mid-nineties, director Shane Meadows has defined himself as the definitive voice of lower-class Northern England. This Is England is the fifth full-length film of a director whose works are relatively unknown outside of the United Kingdom. Unemployed and on the dole, Meadows completed twenty-five short films on a borrowed video-cam before winning a competition sponsored by Channel One and the National Film Theatre with Where’s The Money Ronnie (1995). Meadows received British Film Industry funding for a one hour comedy, Smalltime (1996). Twenty-Four-Seven (1997) featured Meadows’ first household name: Bob Hoskins plays a burnt-out coach/bum. Hoskins returns to his home town to reopen a dormant boxing club and turn a gaggle of local losers into a team (but don’t expect any Rocky sentiment up North.)

Meadows prefers black and white, natural lighting and long-held medium shots, a departure from the overshot, self-consciousness of the Lock, Stock & Two Smoking Barrels generation. Meadows moves his camera around his characters to give a claustrophobic feel of inclusion in clammy, terraced sitting rooms. His next film was A Room for Romeo Brass (1999). Like This Is England, it’s a semi-autobiographical recounting of two young lads falling in with the wrong alpha-loser. Meadows cast his long-time friend and non-actor Paddy Considine (best know in the U.S. for his support role in Ron Howard’s limp Cinderella Man) as Morrell, a violently unstable suitor. Considine returned for Meadows’ Taxi Driver meets High Plains Drifter low-end revenge masterpiece Dead Man’s Shoes, a critical and financial success in the U.K. Meadows, like contemporaries Ken Loach (Kes) and Mike Leigh (Naked), often employees non-actors. With their bad teeth and pasty faces, they ain’t oil paintings, but they bring a realism to his movies seldom found in American cinema. Meadows’ films come across as the observations of a concerned insider rather than an outsider taking a quick tour.

As represented in This Is England, the eighties saw a marked increase in racial violence in the United Kingdom. The working class was frustrated by Thatcher’s denationalization, a demoralizing period wherein previously national industries and utilities, such as British Air and British Gas, were privatized. The result was job loss, large-scale union strikes and an elevation in working-class folks of different ethnicities turning on each other. Skinheads (including black skinheads) engaged in rampant Paki bashing, violence aimed against Pakistani and Asian emigrants. Meadows’ louts are raw, rough and believable with a heartfelt, twisted morality. Meadows avoids the simplification of violence and violent people that too often appears in English thug pictures (Green Street being a good example: think Frodo Baggins as a football hooligan).

In an early scene, Shaun sits alone in a crippled row boat on a seaside wasteland. He is adrift, going nowhere, a child looking for a place to moor. That was a common state for the millions of unemployed in Thatcherite England. This Is England is a study in young men without guidance or mentoring and the consequence of choosing bad parental substitutes. Like Ken Loache’s Sweet Sixteen, Meadows’ films examine the excesses available to the young when there are no mature adults on the landscape. Skinheads, drug dealers, psychos and burnouts are the replacement father figures in Meadows-land.

Meadows considered the Falklands an excessive show of super power muscle over an army comprised of boy soldiers. Dead Man’s Shoes’ Anthony similarly lost his brother Richard to Iraq and is left susceptible, then exploited and tortured by the local drug thugs. Both boys are waiting for a hero, and unguided, make the wrong choices. Mothers, always secondary and dominated figures, strive, but lack any parental authority and are frustrated by the whims of their brats. In Meadow’s world up North, men struggle but ultimately fail to find their place in contemporary England.

Yaa Gyasi’s second novel, Transcendent Kingdom, blends science and religion, the past and present, in a story about a small Ghanaian family that immigrates to Alabama.

Odette England puts photographic peripheries at the center of her work, whether the edges of images or the residual marks left behind by photographic process.