Woman is the Future of Man, Dir: Sang-soo Hong 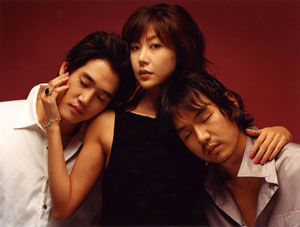 Woman Is the Future of Man begins with a reunion between two guy friends, the joy of which lasts for about ten seconds before the onerous complexities of their past relationship start weighing them down. Next thing they’re drunk at a noodle bar, barely restraining their contempt for the other’s lifestyle. Munho (Yoo Jitae)—a kind of crass Korean Ben Affleck—is a near-tenured college art history teacher. Hunjoon (Kim Taewoo) is a glum, dreamy scholar just back from an American film academy. Their conversation is wincingly awkward, and at first revolves around school—a symbol, like Munho’s recent marriage and mortgage, for lack of freedom. Ambitious Hunjoon doesn’t want to teach (he wants to make films, like Mr. Hong). But Munho lets him know there isn’t much else for an ex-film student to do. Mr. Hong intricately examines this question of freedom for the rest of the film, mainly through the lenses of sex, unhappiness, and academia.

Each young man, alone at the table, fails to pick up a demure young waitress. Hunjoon plays his filmmaker card (“Are you interested in acting?”) and Munho his art professor card (“Would you like to model for me?”). But they both despise their own superficiality. In an attempt to ignore what they’ve become, they recall their younger and more vulnerable years spent with Sunhwa (Sung Hyunah), a sexy, progressive girl they each used to date. Out of boredom and curiosity, they look her up in nearby Puchon.

Sunhwa, you might say, is the future of man for Hong. Her hairstyle, clothing style, and disposition change in nearly every scene, such that she seems to be four or five different actresses. She evolves and adjusts. But besides gaining weight, the men stay the same. “Men are all alike!” Sunhwa cries in a flashback, after Munho thrusts his hand up her skirt. “You’re all animals!” And yet she remains coyly submissive, asking permission to moan during sex with Munho and quickly acquiescing when, in her Puchon apartment, he tells her to blow him. Men, somehow, are still in charge.

Hong masterfully renders the minutia of human boredom, and the attempts people make to smuggle their fantasies into real life. The tragedy is that his male characters, at least, don’t know what they want. They talk in order to figure out what they think, only to break down in drunken self-hatred over what they’ve just said. In one such scene, Hunjoon demands Sunhwa burn him with a cigarette. She quietly puts it out instead.

Reframed: The Woman in the Window

Throughout the Dulwich Picture Gallery’s wide-ranging Reframed: The Woman in the Window, thoughtfully curated by Jennifer Sliwka, we are reminded of that binary—who has agency and who may not?—and the roles that we then assume as viewers of the women represented.