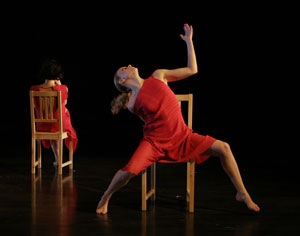 Everyone deals with death in different ways. This has never been more apparent than in Neta Pulvermacher’s evening of works at Dance New Amsterdam in June. Gotta Go, Welcome To My Garden and Air, were choreographed as a trilogy and explored death and the afterlife. Whatever death is—its mystery, sadness, release, journey—Pulvermacher’s trilogy embodied it wonderfully and provocatively through a mixture of quirky theatrics, sophisticated aesthetics and solid modern dance vocabulary.

The first piece, Gotta Go, was not full of tears for the dead; it lingered between the imaginary, the eerie, and the humorous. Pulvermacher herself came on stage, dressed as a man of death in a long blonde wig, a grey jacket that went down to her shins, and a derby hat. She walked up to the audience and with icy eyes, pointed her finger and reminded us of our fate.

This was jolting. Instead of tiptoeing around the issue, she thrust it in our face, framing her choreographic ideas with a brilliant music score of kitchen sounds, autopsy report recordings and love songs. Her choreography for this piece made me believe that only in the body is it possible to read emotion. At one point, after arabesques and lunges, four dancers faced the ground, crouched on hands and knees and started to convulse. It started as a simple pulse in the ribcage and progressed through their entire body—heads down, faces hidden, emanating agony. They crawled up and down stage on parallel rectangles lit on the floor and then stood with visible effort. They fell and curled into the fetal position and covered their mouths, making words seem simplistic.

When they did speak, it was disjointed and occasionally gibberish. The dancers held zombie looks on their faces, but moved with ease and beauty through intricately staged diagonal patterns. When Pulvermacher left, the dancers sat on four chairs, picked up cigarettes that were placed beside the chairs, crossed their legs and inhaled like sex goddesses, then coughed uncontrollably.

The second piece was given over to theatricality, which is one of Pulvermacher’s strong suits. Welcome to My Garden was a staged tableau of a family of women dressed in black and white with expressionless faces. One leaned with her back to the audience, while the others rotated positions around a wooden table, two chairs and a painting held at varied angles—it was odd and sublime. One dancer started singing “Love Me Tender,” and then screamed off-key.

Pulvermacher described Welcome To My Garden as a re-imagining of Elvis as king of the afterlife. That became evident only through the choreography. Hip thrusts were melded with the modern, no frills choreography that Pulvermacher introduced in the first piece, and fluid limbs turned to stiff, lifeless movement.

The third work, Air, was light and freer than the first piece. Its strength was in the repetitive patterns of movement and space. Most appealing was a phrase with four dancers leaning against four columns on stage. They relied on these pillars to stand. They held on for dear life. The relationship formed between the columns and the dancers allowed for an incredibly wondrous play with body angles that Pulvermacher nailed.

In this trilogy, Pulvermacher made evident the innumerable emotions and complicated ideas that come forth when facing death, and showed that they can be brilliantly communicated through movement.

The exhibition centers on motion above all else—stemming from an open-ended question on the apparatus of words, and how communication guides, or perhaps structures, the way human beings exist in the world.