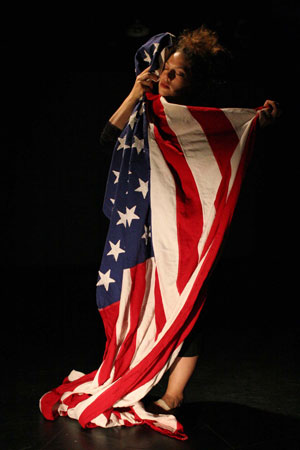 Alexander Beller in us at HERE Arts Center. Photograph by Steven Schreiber.

An American flag covers a dancer like a soldier’s body before burial. A fist pushes through the place where the heart would be, mimicking the organ’s pulsating rhythm and suggesting life under what appears to be dead.

The performer under the flag is Alexandra Beller, a bold dance artist pushing the limits of identity and patriotism in a successful political work/love story appropriately titled us, directed by Kristin Marting at the HERE Arts Center in June.

Sex, prostitution and manipulation play a large role in Beller’s us, which uses the context of a love relationship to play out what she says in a press release is her “quest to build a healthy relationship with her country.”

After lying under the American flag, Beller rises, startled by a screeching baby. She goes through a series of familiar gestures—giving us the thumbs up or splitting her fingers into peace signs—that force us to rethink their meaning. She makes us re-examine a lot of things during her performance, mixing wide-reaching dance choreography with symbolic gestures and dialogue. At one point, Beller turns to a man in the audience and says, “I love you, but I feel like you’re not on my side.” She treats the audience as she does the objects onstage; we mean something, and it feels good. Later in the evening Beller asks all four sides of the audience to write her words on notecards. Because Beller isn’t simple, neither is this transaction. She calls out incomplete sentences and thoughts on slavery, murder, gay marriage and illegal aliens, and summons separate sides of the audience to write different fragments. Eventually she has the audience read her jumbled phrases aloud, and they spell out a complete idea.

Between interactions with the audience, Beller partners with all the objects onstage. The mop becomes her lover and later her spear, which she pokes into the holes in blow up dolls. She waltzes with the mop, makes out with it, and cunningly twists and dips it. The trashcan is where she accumulates her objects, sometimes pulling them out with her teeth. These objects are wrought with meaning: the sex doll she blows up deflates and blows up again (an obvious message about women), a bottle of wine, a gun, a baguette and a grenade she casually places on top of the American flag spread like a picnic blanket.

Beller presents these strong images and turns them into dance. As she collects sex dolls from behind the audience and mops them up like filth, she comments on the treatment of women. She critiques the treatment of prisoners by piling the dolls on top of each other and manipulating them into compromising positions. Beller makes us rethink the symbols and ideas of patriotism to which we are daily exposed, and calls on us to question our own relationship with the U.S., love, war, bigotry, hate, sex, the French: Beller covers it all with sophistication and a full throttle performance.

A “violent” intensity might erupt at any minute, an adolescent mood swing might hit like a tsunami, and yet the story maintains a canny and scrupulous realism. This author couldn’t be more alert to psychology’s delusions and society’s con games. She’s both a cool cat and a bleeding heart, combining both in passage after passage that, just for starters, speak volumes about the skill and vitality Ann Goldstein brings to her translation.

Cosmic Dancer, curated by Florence Ostende at the Barbican Centre in London (with which his eponymous dance company is partnered as an artistic associate) is the first in-depth exploration of Clark’s work. By foregrounding materials like films, interviews, sets, and costumes, Cosmic Dancer provides an opportunity to survey Clark’s career-to-date through the lens of its documentation.