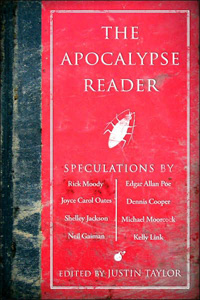 This has been a good year for the literary-minded eschatologist. First, there was Cormac McCarthy’s The Road, a full-throated lament for a man and a boy surviving in a scorched and poisonous landscape. This spring saw the release of The Pesthouse, Jim Crace’s account of a future America depleted of population and wealth. The film adaptation of P.D. James’s novel Children of Men made a successful showing at the box office, and there are already previews showing for another adaptation of Richard Matheson’s I Am Legend. The newest book to explore this trend is The Apocalypse Reader, an anthology of short stories exploring the varieties of the apocalypse, from personal to global.

In the 1970s and 1980s, more mainstream writers of literary fiction began to take up the tropes of post-apocalyptic fiction. The impetus behind this movement has still not been fully explored by literary critics, but there are a number of interesting books, particularly in the last thirty years, from writers like Russell Hoban, Walker Percy, Bernard Malamud, Paul Auster, Margaret Atwood and Denis Johnson.

Perhaps because of these more “literary” novels, the focus of post-apocalyptic literature has also shifted away from the logistics of the world’s end to the specifics of survival—that is to say, less of a preoccupation with how the world ends, and more of an interest in who is left behind. Particularly in the world left standing after the fall of the World Trade Center, survivors’ stories have a new interest for both writers and readers.

Taylor’s anthology reflects this shift away from prognostication and toward the intimate details of apocalyptic experience. He indicates in his introduction that there are two themes for the collection’s organization—the obvious one, of course, is the end of the world. The second, however, is an intention to celebrate the embattled and under-appreciated short story. Taylor also mentions that he interprets the term “apocalypse” according to the original Greek, meaning a “lifting of the veil” or a “revelation”. This makes for a particularly broad interpretation of the word “apocalypse” and a correspondingly diverse selection of short fiction, covering cataclysmic moments big and small, from the Great End of All Things to the small end of relationships or the self.

There are certainly some very good choices made for this collection. There are classic selections from H.P. Lovecraft, Edgar Allan Poe, H.G. Wells and Nathaniel Hawthorne, as well as a few heavy-hitters of science fiction, like Ursula K. Le Guin and Neil Gaiman. Shelley Jackson’s searing story “The Hook” explores the line between sex and death in a world hardly distinguishable from a trash heap. In Adam Nemett’s “The Last Man,” human beings survive a flood because of the leadership of a drug-addled, mask-wearing megalomaniac perched on a rooftop.

There is also wonderful satire of the apocalyptic genre, in Jeff Goldberg’s zany “These Zombies Are Not A Metaphor” and the religious farce of Brian Evenson’s “An Accounting.” Add as well to the mix a complete newcomer, the previously unpublished Jared Hohl, and his dream-like, eloquent story “Fraise, Menthe, Et Poivre 1978” in which the last remaining survivors live on in abandoned apartments, performing burlesque scenes to express the nihilism of civilization’s complete breakdown. Finally, Lucy Corin’s “Sixteen Small Apocalypses” contains exactly that: sixteen pieces of microfiction, by turns poignant, horrifying, and playful. The best one is a two-sentence piece called “July Fourth”:

“Got there and the ground was covered in bodies. Lay down with everybody and looked at the sky, grinning and bracing for the explosions.”

In two turns, Corin manages a lovely tense-and-release, cleverly exposing the expectations built up around the idea of cataclysm and its innocent echoes in everyday life.

However, there are certain selections here that seem to be, at best, very loosely connected to the organizing principle of the anthology and, at worst, full of unconnected imagery without any of the revelation promised by the word “apocalypse.” Dennis Cooper’s “The Ash Gray Proclamation” is one of the latter sort, focusing almost exclusively on an extended conversation between a junkie, a teenage prostitute and a psychic. A brief excerpt:

Josh: Having sex with a thirteen-year-old. Who’d have thought? It’s like I finally know myself.

Mackerel: You mean you know me. Not to be egomaniacal.

Josh: So you’re an anarchist. That’s hot too.

Unfortunately, it never quite gets beyond this level. The conversation remains unwavering in its superficiality, until such a point that the reader will be forgiven for wishing there was an actual apocalypse, to end the circling of adolescent twitter around the drain of death, drugs and sex. Another bizarre moment in the anthology is Tao Lin’s “I Am ‘I Don’t Know What I Am’ And You’re Afraid of Me And So Am I”. Lin’s writing is more theatrical than revelatory, and this story is essentially a monologue for the maligned teenage boy, permanently arrested in a state of nihilistic revulsion. Lin is a gifted reader and brings out interesting nuances in this story when he reads it aloud, but the fact remains that it belongs in a different sort of anthology. Luckily, he has the good grace to be brief.

Taylor has confined his anthology of the apocalypse to the short story format, so this book does not include excerpts from any of the major novels written about the subject in the last hundred years or so. Particularly, there has been a shift in the way writers react to the apocalypse—from something feared and warned about to something potentially cathartic, a wiping-clean of the crowded and chaotic slate of contemporary life. That sense of catharsis is suggested by many of the stories in the book, but a real sense of the progression of ideas about the apocalypse in literature is elided here. To be a complete anthology, it would have to include, or at least mention, the many novels on the subject. The apocalypse and the short story is an uneasy coupling, and this is reflected most clearly in the work that seems stretched to meet both criteria.

Regardless, the end of the world is still very much on our minds. The constant yet never completely intrusive presence of war weighs heavily on the imagination, and though most of us will never see or experience it directly, perhaps these apocalyptic visions are a sort of counterweight to the moral exhaustion it causes. The apocalypse, at the very heart of it all, is about discovering the meaning behind human suffering, about tearing off the veil at the end of all that we know. Although this ultimate epiphany is elusive (perhaps because it is illusory), it is in the stories told to us that we find the hope to go on. Taylor’s anthology, quite rightly, ends on that note, in a story from Lynn Tillman: “Out of nothing comes language and out of language comes nothing and everything. I know there will be stories. Certainly, there will always be stories.”

LAURA STOKES is a writer and teacher living in Fairfax, Virginia. She has an MFA from The New School, in New York City, and her work has previously appeared in the Brooklyn Rail, as well as XOJane, BUST and Bookforum. She lived in Brooklyn for seven years and still misses her old street in Greenpoint very much.