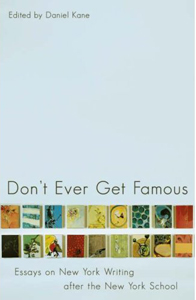 Don’t Ever Get Famous follows the publication of Daniel Kane’s earlier book of essays, All Poets Welcome: The Lower East Side Poetry Scene in the 1960’s with a further analysis of the second-generation ‘New York School’ in avant-garde poetry. Among the many students and young writers of poetry today who tend to avail themselves of the techniques that can be gleaned from the two contemporary polarities roughly defined as “Language” and “Spoken-Word/Slam/Performance,” there has been a developing curiosity towards the poetry originating in New York during the mid to late 1960’s into the 1970’s following the proliferatiaon of influences from the Black Mountain, Beat, and first-generation preeminent New York School.

“I suspect that some readers might be tempted to reject second-generation work because of its in-house feel,” Daniel Kane begins in his own essay, after reading the poetry recently compiled in 2001 by Anne Waldman and Lewis Warsh for The Angel Hair Anthology. Kane goes on, “I felt initially as if I was looking through a window of a building across the street and witnessing a fairly glamorous group of people joking around, laughing, and talking about each other.”

Though these essays are written at a deliberate and exacting pace, they do not resort to practical definitions of aesthetics, or easily repeatable labels that stratify the various works into a stilted causality. Influences overlap and correspond from essay to essay as they are introduced. Where All Poets Welcome established the atmosphere of the era in biographical detail, bracketing the sources and extensions of the second-generation scene within a larger social and aesthetic context, Don’t Ever Get Famous takes a restorative and critical approach, citing the collective intentions of writers to cultivate an increasingly diverse aatmosphere of collaboration as a vital means to writing and reading. The collection pays particular attention to the early years after the founding of The Poetry Project at St. Mark’s Church. A variety of scholars and poets help explain the importance of the early small-circulation mimeographed books and magazines of the period, such as Ted Berrigan’s C: A Journal of Poetry, Bernadette Mayer and Vito Acconci’s 0 – 9, and Umbra Magazine; all innovations that resulted in the cultivation of what Linda Russo describes in her essay as “a space open to continued change in the field of poetic production.”

Each author lends a certain individual insight, whether scholarly, first-hand, or otherwise; in this way the book as a whole encompasses a much broader understanding of the kinetic activity of the period. As Kane mentions in the book’s introduction, “[All Poets Welcome] left me hungry for a more direct and critical engagement with the innovative writing coming out of the Lower East Side scene.” However, Don’t Ever Get Famous is not meant to be taken simply as a congratulatory account lauding the creativity of the period; and the essays maintain an objective critical distance throughout. Kane’s essay in particular acknowledges the conflict in the ideals that set the two generations apart from one another. The second-generation continued to sustain itself through “balanced strategies of exclusion central to the identity of a community,” in staying more or less geographically situated below 14th Street, though they tended to repudiate the first-generation’s complex affiliations with Uptown institutions. The alternative concepts of the second-generation’s writing “collective” centered around an atmosphere more akin to collaboration, contrasts with the first-generation’s writing together in a way that imbued their poetry with a kind of “collection” mythology; visions of a select few individuals apart from the crowd. At one point, Kane quotes Allen Ginsburg’s description of the first-generation: “a narrow New York Manhattan Museum of Modern Art artworld cocktail ballet scene,”though the essays uphold the fact that the second-generation was not preoccupied with ideas of transgression. Their collective aspirations allowed for a new advancement and promotion of first-generation’s various aesthetics.

One recurring analogy throughout Don’t Ever Get Famous frames the distinctions between generations in terms of their musical preferences. The second-generation’s interests began to stray from early bebop and jazz’s “improvisational gestures of the body-mind available almost exclusively to the musicians,” and gravitate more towards the inherent group sensibilities of Rock & Roll. This paralleled the spirit of collaboration, and growing political conscience central to the second-generation’s unified process—ideas embodied by Bill Berkson, Michael Brownstein, and Ron Padgett in their collaborative poem I Feel Free simply as “to break on through/ to the other side, you guys.”

Social Poetics, “contains a history of the contemporary working class: booksellers, Amazon warehouse workers … Powell’s staff, paper mill workers […] editors and copyeditors […] janitors and ‘nightshift mothers’ who clean all these office spaces … .” The list goes on, soon enough reaching the book in our own hands. Every line seems soaked with the sweat of labor. If a creative writing text ever raised a call to the barricades, it’s this one.