David Damrosch, The Buried Book: the Loss and Rediscovery of the Great Epic of Gilgamesh (Henry Holt, 2007) 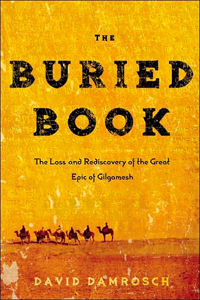 The recovery of the Epic of Gilgamesh in the mid-nineteenth century could best be described as disorienting. Credit went to the eastern parts of the Fertile Crescent for urbanization and farming, but literature belonged to the Greeks and Hebrews. When the tablets bearing Gilgamesh were discovered, the Bible and Homer’s verses were already embedded in the foundation of Western consciousness. British historians of the nineteenth century, with their shovels in the Promised Land and Asia Minor, never suspected such a literary treasure to be culled from the dusts of what is today Iraq. The Buried Book: the Loss and Rediscovery of the Great Epic of Gilgamesh by David Damrosch allows us to relive the historical moment when Gilgamesh met the modern world.

The Buried Book begins at the British Museum in London, 1872. After more than twenty five hundred years of the tablets lying buried and incomprehensible, George Smith decoded the Babylonian flood story and then, in mad excitement, and “to the astonishment of those present, began to undress himself.” Smith’s rapture over the epic was shared by many; the story seems to confirm and offer origins, for Noah’s flood. But for the scholar, discovery became complicated. When they set out to unearth the rest of the tablets upon which Gilgamesh lives, they had to face the mess that was (and still is) Middle Eastern politics. The Assyrian archaeologist was not only an adventurer, but he was also an anomaly, an ambassador, a mistrusted foreigner, a prisoner of dictator-kings, and ultimately, a man set on his own self-destruction. The lives that unearthed the famous epic sacrificed themselves in the name of history with little recognition. Smith endeavored to uncover the remainder of the story he had begun to translate, with his health failing and little support from his motherland. He died of dysentery in Aleppo, leaving behind a large family in England. Damrosch has his own mission of recovery, that is, to recount the tragic pioneers who disinterred the library of the Assyrian King Ashurbanipal, where the tablets of the Epic of Gilgamesh were contained.

Most readers walk away from Gilgamesh seeing a simple struggle against mortality, and overlook the era in which the epic was understood. It is hard to imagine that in the capital of the Assyrian Empire, Nineveh—the location where the tablets were produced—the epic was already considered a classic. As early as 2,700 BC, an unknown Babylonian poet composed the epic’s verses. They were passed down orally for centuries before they were etched in stone. Damrosch details how the Assyrian king who commissioned the tablets might have interpreted them, more than two thousand years after their composition. Unlike royalty before him, King Ashurbanipal then learned the ancient languages of Akkadian and Sumerian, in order to have access to literature, and give a voice to his reign. His appreciation of the epic was, in part, its utility. It served as a cautionary tale for proud rulers. King Gilgamesh constantly suffers repercussions for his arrogance, especially when he snubs the goddess of love, Ishtar.

Damrosch’s final pages are dedicated to contemporary writers, and the resurrection of the King of Uruk in today’s literature. Saddam Hussein’s first novel (strange but true—with the help of ghostwriters, he purportedly wrote four) Zabibah and the King, incorporates the themes of leadership found within the ancient text. Philip Roth’s The Great American Novel is about “Gil Gamesh,” a tyrannical baseball player. By pointing out the use of the epic by these novelists of very different cultures, Damrosch intends to explain a common heritage. He hopes to leave us pondering an expansion of the boundaries of civilization; the Mesopotamian King’s legend is compelling for modern intellects as well as ancients, Eastern as well as Western. But while George Smith, Saddam Hussein, and Ashurbanipal may share a story carved into the same tablets, the modern treatments are all too apt to claim exclusive inheritance, and to deny a common history in favor of contemporary clashes.

How many fish should you catch on an afternoon fishing trip? Marine ecologist Loren McClenachan thinks about the shifting baselines in our perception of recovery and change.

The title of the Met’s new ongoing installation, Epic Abstraction: Pollock to Herrera, suggests a revisionist take on the history of abstraction since World War II. However, the show is drawn almost entirely from the permanent collection, which is simply not broad enough in this area to fulfill such an ambitious promise.