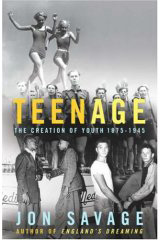 There’s the surprising fact that America’s iconic teen rebel—James Dean in Rebel Without a Cause—was inspired by a teenage psychopath named Harold. Psychologist Robert Lindner documented his treatment of Harold in his book Rebel Without a Cause: The Hypnoanalysis of a Criminal Psychopath. A “rebel without a cause, an agitator without a slogan” was Lindner’s definition of a psychopath. This is the kind of historical morsel that points to implications so odd and intriguing they could fill a book. Instead it’s a footnote in Jon Savage’s meticulously researched tome Teenage: The Creation of Youth Culture, which should give you an idea of how brimming it is with this sort of revelation.

Savage, a well-known music critic in the UK and author of England’s Dreaming, a definitive history of British punk, offers strong theories about how the concept of adolescence emerged after WWII as a stage independent of childhood. He finds the precedent of the modern teenager in figures like the 19th Century teen diarist Marie Bashkirtseff, Rimbaud, Peter Pan, and groups like the heps, the swing kids and the Neo-Pagans. In telling their stories, Teenage comes across as a compelling excursion into the past that enlightens us as to who we’ve become while indirectly spiking our curiosity about what’s to come. “Teen savage” is the name writers and scholars have, in the past, put to that constellation of riot and rebellion, moodiness and restlessness that characterizes adolescence. The psychopath, according to Savage, can be seen as the extreme manifestation of the “barbaric” teen and he blames, in part, industrialization and our obsession with youth for creating monsters like 14-year-old serial killer Jesse Pomeroy, and teen murders Leopold and Loeb. At the same time the commodification of youth emerged as a way of “harmlessly diverting youth’s disruptive energies.”

In Savage’s luminous world of rogues and heroes, poets and murders, one thing is clear—they’re intoxicated by their youth and so are we. What’s the mechanism behind this? And what form is it taking today? This was the impetus for the following email exchange with Savage.

Karen Rester (Rail): You write extensively about how the Hitler Youth movement harnessed nearly the entire population of German youths. Is this the same thing the Congolese renegade armies harness in their child soldiers and the Islamic terrorists harness in their teenage suicide bombers? I believe you’re saying adolescents have innate sadistic and self-sacrificing tendencies, and by mobilizing them these adult leaders are in essence bringing out their inner psychopath or triggering a kind of death drive.

Jon Savage: Well obviously only a small proportion of all adolescents are involved with this death drive. Because it is so shocking and inconceivable to most of us they make the news. However I do see a correlation between the Hitler Youth and the extreme Jihadists. Both are/were involved in death cults which appear to offer them some degree of autonomy and control but which in fact deliver them into murder and suicide. For the answer, I’ll go back to G. Stanley Hall who writes in detail in Adolescence about adolescent pathology and that age’s appetite for “religious conversion.” Also you could look at the original Rebel Without A Cause where Robert M. Lindner writes in detail about adolescent psychopaths and the fact that they can be “embryonic storm-troopers.”

Rail: As for the teen killers Leopold and Loeb, you explain their motive by saying that “the American fusion of commerce and deep emotional needs has its violent undertow...America was priming a loaded gun.” Is the school shooter the logical outcome of this fusion? Maybe it’s no surprise that Virginia Tech shooter Seung-Hui Cho took it a step further, setting the record for mass campus murder.

Savage: Comparing the US and the UK, our spree killers tend to be older men, not adolescents. What fascinates me about Cho and the Columbine killers is the depth of peer on peer rage—which to me says a great deal about the nature of American schooling and American society: the rigid age grading, the drive to conformity. (We Brits have big youth-on-youth violence issues, but they do not take this form. More random gang knifings or drug-related shootings). Plus, if you have guns readily accessible, this sort of thing is going to happen. After Charles Whitman, there was a template—updated so effectively by Klebold and Harris. Just go back to any high school movies and you’ll see the source: the revenge of the geek. Carrie lives.

Rail: Which brings up what you call the ironic “nexus” of youth, death and fame—the “live fast die young” motto that, as you point out, created some of our greatest legends. As The Who put it in “My Generation,” “Hope I die before I get old.” What’s so intoxicating about it for musicians?

Savage: Dying young is obviously one way of establishing eternal youth and thus avoiding the big issue of how to grow older with some kind of grace. Examples of those who have: Neil Young, Bob Dylan, David Bowie, etc. Examples of those who haven’t: Johnny Rotten, Morrissey etc. Plus the whole romantic idea of being outside society and outside time.

Rail: Does it explain why so many teen subcultures form around a style of music?

Savage: Teen subcultures form around music because music is a huge marketing hook and a prime entry point for teens into peer society. Then music becomes associated with this teen peer society.

Rail: This nexus is what sealed Kurt Cobain’s fate. Like the 70s punk legends his authenticity came from questioning the system, from operating outside of it—though ultimately he felt caught between the celebrity machine and maintaining his authenticity.

Savage: Don’t underestimate individual pathology—suicide in the family—and the availability, again, of guns. In the interview I did with him in July 1993 he spoke of how much he identified with Carrie and how that film chimed with his high school experience. He felt that his peers would have voted him “Most Likely to Kill Everyone at a High School Dance…” So the rage turned inwards.

Rail: Unlike Cobain, the rapper’s authenticity is predicated on climbing out of the ghetto while remaining true to the ‘thug’ lifestyle—in other words, the very fact of profiting from the system means they’re beating it. 50 Cent’s motto “get rich or die tryin’” speaks to this. Are rap stars today’s punk rebels?

Savage: I find the thuggist rappers’ almost exact reproduction of dominant—might-is-right, consumerist, illiberal, misogynist, homophobic—attitudes repulsive and it certainly militates against any idea that they are at all rebellious. It is the triumph of individualism versus collective action and a travesty of the civil rights generation. Also that “we tell you what’s happening on the streets” social realist discourse is very tired. Which streets?

Rail: How is it possible to write so romantically about past teen rebels and heroes and not find yourself somewhat disappointed by kids today? When you compare the era of the Sex Pistols, of the teenage resistance leaders in the face of the Nazis, don’t you feel let down by 21st century youth culture?

Savage: I do not seek to project my own adolescence onto current adolescents. That’s just stupid. Each generation has its own set of problems, its own task. In some ways, I’m glad that adolescents today are more catered to and often, have better relationships with their
parents. Anyway, the in-depth stories of today’s teens are still being enacted: it will take time before they are written down.

Rail: Maybe it’s harder today for adolescents to organize in meaningful ways outside of our commodity culture. Anytime a subculture forms and smells even remotely like teen spirit it gets co-opted by the mainstream.

Savage: Obviously commodification is the big issue. That’s why people still ask me about punk all the time. How did this happen then? And how were things so different? If you use the mass media to critique the mass media, as the Sex Pistols did for instance (inter alia), then you are laying yourself open to all sorts of contradictions. And eventual recuperation because the media will always be stronger than you are. So today the problem is how to avoid this kind of recuperation and get your message across. That’s one of the tasks facing current adolescents.