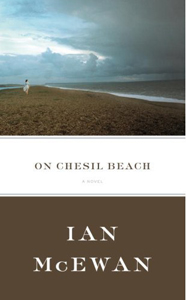 While Ian McEwan puts two characters, newlyweds Edward Mayhew and Florence Ponting, at the center of On Chesil Beach, their times concern him as much as their individual experiences. Put another way, he cannot convey their experiences without also bringing their period to life: “the times held them,” McEwan endeavors to show how.

The details matter, and McEwan presents them with precision and economy. It’s as if he aimed to illustrate in fiction Marx’s dictum: “Men make their own history, but they do not make it just as they please; they do not make it under circumstances chosen by themselves, but under circumstances directly encountered, given and transmitted from the past.”

McEwan firmly situates his couple’s story in its historical moment. Their July 1962 wedding falls between the building of the Berlin Wall the summer before, and the Cuban Missile Crisis a few months later. McEwan handles the intersection between “private anxieties” and “world events” with a deft touch and even some humor, as when Edward imagines the prime minister’s face as a method of staving off premature ejaculation, or “arriving too soon,” to use the euphemism of the day. Trepidation about sex lies at the heart of the story, and an early arrival plays a pivotal part.

Edward and Florence are not mere stand-ins for historical tendencies or forces. Rather, McEwan infuses the temporal moment with personal experience. The couple “lived in a time when a conversation about sexual difficulties was plainly impossible,” the narrator says in the opening line. While Edward is thrilled at the prospect of finally losing his virginity, Florence is revulsed at the thought of being penetrated. Their failure to communicate compounds their confusion, as Edward consistently misinterprets his wife’s responses to his clumsy attempts to initiate sex. The wedding night ends in humiliation. (He didn’t think of the prime minister’s face when he really should have.) Unable to address the ensuing embarrassment, their marriage immediately collapses.

How could two people in their early twenties choose to be wed yet still be so remote from each other? McEwan addresses the question, and in the last line of this passage shows an awareness of the sad honeymoon’s comic side:

And what stood in their way? Their personalities and pasts, their ignorance and fear, timidity, squeamishness, lack of entitlement or experience or easy manners, then the tail end of a religious prohibition, their Englishness and class, and history itself. Nothing much at all.

The early 1960s were not like the later part of the decade. Times and details may change, On Chesil Beach suggests, but possibilities for misunderstanding, failure and humiliation persist. McEwan rapidly brings the story into the 21st century in the novella’s last few pages.Edward realizes that things could have been different. He came too soon; she went too soon. Edward was not able to determine his temporal circumstances, but even in those tense times, he could have done something. He may not have known that he should have tried to talk to her. He might not have known exactly how to—he was held by the times. Still, he should have known to try.

Being serious about history, according to poet-critic Clive James, means believing that “things might have been otherwise.” Perhaps the process of realization, unfortunately, is to realize this too late.

About midway through the National Gallery’s exhibition Andrea del Verrocchio: Sculptor and Painter of Renaissance Florence, you find yourself standing in front of a beautiful young woman carved from marble that has mellowed to a honey-brown hue.