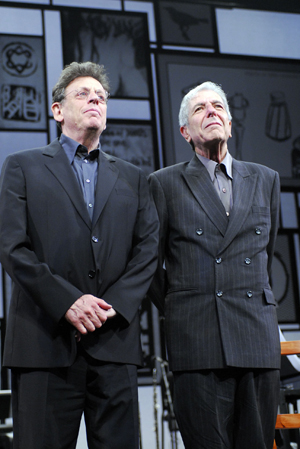 The slogan of Toronto’s LuminaTO arts festival is “see the world in a new light.” However, its organizers make no apologies about the fact that LuminaTO is very much about seeing the city of Toronto in a new light—as an emerging cultural Mecca. Although the Toronto Film Festival has, in recent years, become one of the preeminent cultural happenings in the world, the image of this modest metropolis as a cutting edge contributor to the arts has yet to take hold. As LuminaTO’s CEO Janice Price is fond of pointing out, Toronto has long held the less-than-dazzling reputation of resembling “New York run by the Swiss.” LuminaTO, which received significant backing from both L’Oréal Canada and the Toronto Tourism board, was dreamed up with a public image makeover in mind. Bringing together renowned artists and performers in music, dance, film, literature, theatre, and the visual arts and design, and coinciding with two of Canada’s largest ever culturally geared architectural projects (Daniel Libeskind’s Royal Ontario Museum, and Frank Gehry’s Art Gallery of Ontario), the festival’s ambitious inaugural run this past June demonstrated Toronto’s capacity to host a cultural event of world-class standards. 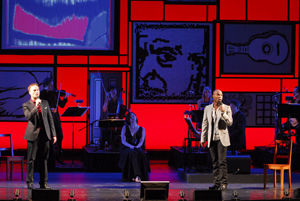 According to its organizers, “collaboration and diversity” were two of LuminaTO’s driving themes. Toronto bills itself as the most ethnically diverse city in the world, and the festival programming—which featured everything from Caribbean drumming to Monty Python’s Eric Idle and John Du Prez, from Aboriginal dance to Nouveau Varieté, and from Polish erotica to Gore Vidal—was a veritable cultural medley. As for the theme of collaboration, two of the festival’s top billed events were joint projects. “Book of Longing” brought together Canadian folk icon Leonard Cohen and internationally acclaimed composer Philip Glass, and “Auroras/Testimony” featured video art by Canadian/Armenian filmmaker Atom Egoyan alongside that of Turkish artist Kutlu Ataman. Interestingly, neither of these last two works was a collaboration in the strictest sense. “Book of Longing” drew on Cohen’s poetry but was chiefly orchestrated by Glass, and “Auroras/Testimony” looked more like separate, parallel installations than a melding of creative minds. Still, these convergences produced some satisfying and unexpected results. 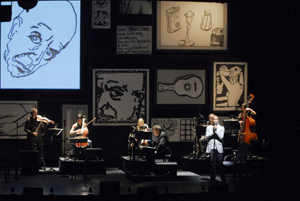 “It’s like the bumblebee, they say it shouldn’t fly,” remarked Cohen, with patent self-effacement, of his and Glass’s concert work. In a discussion between Glass and the poet/songwriter mediated by John Rockwell at Toronto’s Winter Garden Theatre the day following the “Book of Longing” premier, the two artists politicked on the nature of their respective crafts. It was the continuation of what, according to Glass, has been an ongoing conversation spanning several years. Rockwell himself seemed bemused by the performance he had witnessed an evening earlier, questioning whether singers with Broadway/West End backgrounds were the right sort of performers to lend voice to the words of a figure like Cohen.

“Book of Longing” is an unusual work indeed. It unfolds like an elaborately animated scrapbook documenting only the most resigned and narcissistic of the septuagenarian Cohen’s musings. Instrumental solos operate as intervals between extended lyrical segments and shorter limericks narrated by Cohen himself—that husky, monotone voice associated with his post-70’s albums emerging from out of nowhere to slur and imprecate like a God who has lost his faith in man. Behind the musicians, a shifting mosaic of Cohen’s infantile drawings (mostly “girls and guitars,” as Glass observed) unfolds the leitmotifs that have long defined Cohen’s obsessively self-reflexive career: love, art, and failed spiritual aspiration. It is almost a miracle that Glass’s characteristically humorless arrangement manages not to obstruct Cohen’s playful self-irony, even while it monumentalizes his self pity. Once again Cohen described it well when he characterized “Book of Longing” as more of a “collision” than a collaboration, likening it to “that iceberg that crashed into the museum uptown”—a reference to Daniel Libeskind’s radically dissonant addition to the Royal Ontario Museum.

“Book of Longing” will be in New York for the Lincoln Center Festival this July. If all goes as planned, Libeskind’s Freedom Tower will arrive in New York sometime around 2014. But his Lee-Chin Crystal addition to the Royal Ontario Museum is reason enough to make the one hour flight to North America’s newest burgeoning cultural center for a taste of some of what is to come. However much the new ROM might resemble an iceberg, it is a feat of architectural ingenuity well worth beholding. Still, local critical reactions have been polarized. With its dramatic angularity, and irregularly patterned exterior, the building has evoked uneasy comparisons to Libeskind’s notorious Jewish Museum in Berlin. In a particularly reactionary review, Lisa Rochon of Canada’s Globe and Mail said the building expressed a “brutal vision.” She then launched into a vulgar psychological probe of the architect, weaving into her critique a disturbing subtext about Libeskind’s Jewish identity, and summing him up as a resentful, self-aggrandizing figure whose architecture “rages at the world.”

The Lee-Chin Crystal is audacious, but it is also the most interesting architectural specimen in town. If Toronto intends to shake its dull image, it will have to warm up to a little braggadocio. Upgrading the quality of its arts and culture writers wouldn’t hurt either. That Ms. Rochon’s attitudes are far from consensus was evidenced by attendance figures for an all-night preview of the building’s interior. Lines trailed down the street until early morning, with patrons purchasing tickets well after midnight and willingly returning hours later to catch an inside glimpse of Libeskind’s wondrous creation.

A more modest crowd assembled the following day at Art Core Gallery in Toronto’s distillery district to hear Atom Egoyan in conversation with Art Gallery of Ontario director Bruce Ferguson about the video installation “Auroras/Testimony.” Egoyan is best known for his feature-length works currently on view in a retrospective at the Centre Pompidou in Paris. He has been involved in the more intimate endeavor of video art for at least the past ten years. “Auroras” (his contribution to the installation) features seven video images projected across three gallery walls and synchronized so as to enable a collaborative retelling of the story of Aurora Mardiganian, an émigré of the Armenian Genocide who eventually settled in America and became the source of inspiration for a Harvey Gates film. Turkish-born Kutlu Ataman’s “Testimony” features a single video monitor playing an interview between the artist and his former caretaker. The interviewee, an aging Armenian woman, is implored, against her faltering memory, to recall her association with the off-camera interviewer. The tension builds until finally a glimmer of recognition occurs. Both installations address the problematic role of testimony in the construction of historical narrative. Their combined effect illustrates how witness recollection can resemble fictional reenactment. The next stop for “Auroras/Testimony” is the Istanbul Biennale, where Egoyan’s dramatic invocation of events from the Armenian Genocide, which Turkey still officially denies, is expected to raise eyebrows.

Given the prominence and prestige of these “collaborative” works, it is noteworthy that one of the most exciting events of LuminaTO’s opening weekend was a solo effort. “Under Milkwood” is Dylan Thomas’s touching, hilarious, and lyrically magnificent theatrical homage to the hum-drum daily life of a fictional seaside Welsh village. The play has no discernable protagonist except for the town itself, the countless inhabitants of which are often staged by as many as fifty individual actors. In the version performed at LuminaTO, veteran dramatist Kenneth Welsh, who has extensive experience directing the play, undertook the almost unfathomable task of playing all of the roles himself. The result was nothing short of magical. Accompanied only by a few makeshift props, a single musician, and a very talented pair of Foley artists, Welsh breathed virtuosic life into Dylan Thomas’s masterpiece, seamlessly cycling between various roles, and always holding the narrative thread as tight as a Cardiff fisherman’s lucky reel. If there was one work that most lived up to LuminaTO’s lofty ambitions, it was perhaps this one, for Welsh granted his audience not merely a new perspective on one of the 20th Century’s great poetic achievements, but made it possible, at least for a spellbinding 90 minutes, to “see the world in a new light.” Mark your calendars: planning for LuminaTO 2008 is already well underway.

Harold Ancart is a Belgian-born, New York-based painter who seems to have catapulted into the limelight in recent years. His first one-person show at David Zwirner in New York fills two of Zwirner’s adjacent 19th Street locations with large, dazzling paintings, all created in 2020, that provide ample opportunity to consider his contribution to the recent reappearance of a familiar conversation concerning painting.

by Tomás González, translated from the Spanish by Andrea Rosenberg