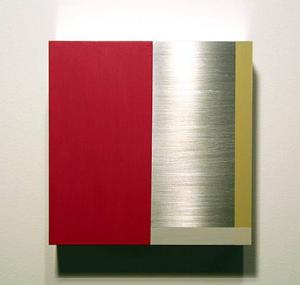 Since 1980 Stuart Arends has been using a box as both a support and a surface. In 1985, he began working on a small cube that extended out from the wall. While he painted all six sides, the emphasis was on the three most visible. Initially, he worked on found wood, but subsequently he worked on sake boxes, whose sides were joined rather than nailed, and steel and aluminum boxes. Able to fit in the cupped palms of one’s hands, the boxes literally and visually stick out; they are at once elegant and awkward, which their scale makes all the more apparent because they do not cover the wall (think Donald Judd) but cling to it, inviting close scrutiny.

The artist’s longtime use of wax and lacquer endowed the surfaces with a sensual presence. Whether the box had a monochromatic surface done in celadon latex, a series of letters or numerals, or hardedge geometric bands, the issue was the relationship between the optical and the physical, color and brushstroke, viscosity and line. This was why Arends wanted close-looking to be central to our experience; he wanted us to recognize that we were looking at paint while identifying its embodied range of distinct but interrelated experiences; color, mark, weight, surface, and physical skin. Instead of feeling small, his boxes struck this viewer as compressed perceptions, like a haiku.

This exhibition contained work in three formats: boxes, columns, and wedges, with the latter amounting to both a departure and a breakthrough. For an artist who has moved slowly and consistently over the past twenty years, the wedges amount to a big step, a reorienting of his inquiry. Seeing the work in New Mexico, where Arends has lived since 1983, it occurred to me that he wants his work to address the discrepancy between the individual’s scale of experience and the actual landscape itself—its vast unpopulated spaces. He gets at this gulf by encouraging us to adjust our focus on a small physical object, even as it, in its jutting no-nonsense presence, is implicitly acknowledging its awkward relationship to a far larger structure. In the “wedges,” which are made of aluminum, Arends utilizes a wedge-like form consisting of a frontal plane flanked by two gently slanting planes; it is both a painting and an object. More importantly, the slanting planes suggest two-point perspective, while the wedge-like form conveys landscape. We are no longer looking at a box, but at a sculptural form that subtly evokes the panoramic.

From his first use of a cardboard box in 1980 to his later use of sake boxes in the late 1980s, bringing evidence of the world into his art has always been important to Arends’ project. While the square, which is central to Robert Ryman’s paintings and Donald Judd’s ‘sculpture,’ is also basic to Arends’ boxes, his use of the wedge-like form moves his inquiry into a realm that deals with our physical relationship to unknowable spaces. He has literally taken on a larger subject.

Compositionally, Arends tends to divide each of the wedge’s three planes into two, unequal geometric areas, which causes our attention to move back and forth. Where the unpainted aluminum continues across the frontal and adjacent slanting plane, one surface will reflect the light, while the other will absorb it. Everything alters when we move, which lifts these paintings into the realm of self-reflexive inquiry. The painted areas echo the continuous shifting from light to dark. Is the plane adjacent to the salmon color a darker tone or is it darker because of the ambient light? Everything is what it is, we tell ourselves, but none of it stays the same. This is the fluid sense of existence that these paintings evoke swiftly and efficiently.

Questioning our own perceptions, and then trying to verify them, we begin to doubt what our eyes tell us. By introducing doubt into our experience through emphasis on the connection between sight and confirmation, Arends opens up the formal aspects of his art to life and change. I don’t know whether John Cage or Buddhism influenced him or not; to a large degree, it doesn’t matter because making art that is open to life, to my mind, represents an innovative expansion of what is essentially hardcore abstraction, particularly in its manifestations of Op Art and hardedge painting.

What should make you ecstatic is the fact that you are becoming part of the recurring enactment of LeWitt’s concept of art: the translation of a concept born in his mind into, simultaneously, images and words.

Combining painting, poetry, video, and sound in an immersive installation that invites attendees into the inner sanctum of his mind, Ceremonies is a powerful new work commissioned by The Kitchen as part of In Support, an exhibition that reflects on ways institutions offer and receive support.

As has often been noted, the ability to make photographs as large as easel paintings allows them to compete visually with paintings. But of course that practical consideration merely identifies the necessary condition for the success of this novel artistic genre; it doesn’t tell us how to interpret these works.