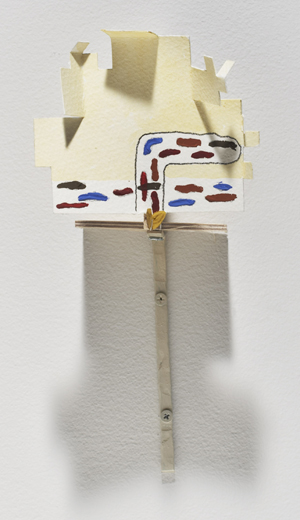 Last summer I introduced my one-year-old daughter to a new bin of art supplies and, within minutes, she was putting out a steady stream of fantastic assemblages, which I immediately pinned up around the room. When my wife came home, she did a double take at the door. How had our little baby sustained such a full-blown creative investigation incor-porating such a wide array of materials and techniques?

Over the next few weeks, as I continued to study my daughter’s work, I came to the realization that she hadn’t, in fact, been their author—but that I’d unconsciously utilized her as a drawing device, strategically positioning her before the work as my hand by proxy. Thus the works had to be considered my own. I was responsible for their built-up compositions, for rotating the cardboard ground I’d picked, tempting her to scribble in designated regions with designated colors—all the while cheering her on. I was also the one who’d chosen when to sweep each drawing away, and when to place the next clean ground before her.

It is this spirit of channeled “child-assistance” that I most admire in the work of Richard Tuttle, who, during the same month that his major, two-year American traveling retrospective closes in Los Angeles, takes us by surprise with a massive new body of work at Sperone Westwater. The current exhibition reveals such a fountain of productivity that one might mistake it for yet another component of the retrospective.

Every piece in this inspired tour-de-force occupies about 4 inches, and is built onto a platform contraption mounted roughly three inches from the wall at eye level (a kind of shadow box frame without the box or the frame). Tuttle reveals his well-honed inner kindergartener in a conspicuous lack of manual coordination—a trait that he has cultivated over the span of his remarkable, 40-year career.

If Tuttle had become a surgeon instead of an artist, there’d be a lot of interesting scars out there. His works never feel sewn up too neatly or nicely. In fact, it is conceivable that Tuttle works in S, XS and XXS dimensions in order to invite into his process an appealing, klutzy dexterity that comes as a result of his own hand getting in the way while working in tight quarters. For, no matter what scrappy material he’s working with—glue, marker, pencil, crayon, aluminum foil, wire, or a piece of watercolor paper the size of a matchbook—it often seems to have sprung from his hand and into the work with amazing suspense, immediately followed by enchanted calm.

In this sense, the viewer of these elegantly installed works may sometimes feel an odd relief in the experience of their tense execution, similar to what a medical student might feel while observing a surgeon’s finesse as he finishes a suspenseful task in a cramped arena. I trace Tuttle’s klutzy dexterity back to Abstract Expressionism—to Pollock’s sticks, DeKooning’s brooms and, later, Twombly’s debauched scribbles. These painters pushed their materials to perform on their own and in uncalculated, often messy, ways, so that they could be free of the burden of facile craftsmanship, invigorated instead by a healthy dose of accident.

For all their endearing clunkiness, each new work at Sperone Westwater can, at the same time, be seen to possess breathtaking stealth, precision, and a refined sense of economy and proportion. One might even say a militaristic regimentation: I felt as if they all stood to salute me the minute I walked into the gallery. Going out on a limb, I would say that the New York artist of this generation who is similarly possessed of a dominant, perhaps competitive, offbeat perfectionism, is Richard Serra. Maybe that’s what is so engrossing and strange about Tuttle’s work—the way he allows for the klutzy kindergartener to meet the perfectionist.

Tuttle’s peculiar brand of perfectionism seems to be geared toward achieving a dynamic presence in the still object. He is so successful at producing this effect that it’s easy to forget that all his materials are permanently fixed. It’s as if the works are alive and awaiting further manipulation or interaction—like tentatively thriving plants that still yearn for their touchy-feely, conversational gardener.

In this way, Tuttle’s pieces are all records of specific action-event performances that have taken place with Tuttle’s hands and been privately viewed by his slightly remote brain sitting off in the upper-deck bleachers eating popcorn. They are thus less like finished works of art (regardless of what their price tags might indicate), and more akin to cheap, flimsy, hastily-made theater props that haven’t been built to last beyond the performance and haven’t been fabricated to be seen from closer than fifty feet. They are not unlike Schwitters’ ever-mutating and hard-to-define Merz creations, or the slovenly crisscrossing byways of the ever-en-route
Dieter Roth. Nor are they dissimilar to a sampling of relic-ephemera from the Fluxus generation.

While viewing the show, I imagined that each piece was the result of a literal recipe or score written out in words, and could be reconstructed any number of times. This approach would put more emphasis on Tuttle’s Constructivist logic, and on language, as opposed to the often inexplicable, ethereal mystification that surrounds the finished pieces. And wouldn’t it be wonderful to discover a set of instructions for a choreography designed to take place outside the artist’s mind? Perhaps Tuttle is closer to Brecht, Knowles, Williams, Spoerri, Higgins, Ono, MacLow—the avant garde of the post-Dada, not the post-Minimal, movement.

Yet, if Dada were at the root of Tuttle’s practice, then why, given his work’s sense of humor, its childishness, wouldn’t it also come across as absurd, defiant, or ironic? Why does the work retain a kind focused intellectual rigor, a cerebral fine-tuning? Given its admirable ephemeral quality, why is it not more negative, failed, antithetical—more dismissive of high art, and, for that matter, more dismissed?

Ironically, I’d say Tuttle’s work is not dismissible precisely because it is so forgettable. After viewing a Tuttle show, I instantly forget what I’ve seen. I find myself unable to recreate mentally, while what I retain is the work’s considerable poetic impact. In memory, the work fails to function and then fails to exist. But this actually contributes to its longevity. For their foggy impressions always leave reason for a refresher course in Tuttle’s native tongue. You might even say that the work becomes subversive through its knack at creating such an impression while simultaneously erasing the short-term memory, causing one to forget ever having seen it. Each time I return to Tuttle, it is therefore in real time and real space, and for the first time and in the first place.

Of course, the Devil is in the details. Throughout the show, I had the sensation that each piece was severely truncated in the sense of the cliché that Writing I students are often advised to remove the tedious first and last paragraphs of whatever they’ve written, in order to thrust the reader into the core of their text without uptight or overwrought explanations. Tuttle takes this method to an extreme, each work placing us right there at the epistemological realization no matter how brief and inexplicable, eliminating the getting in and the getting out. The obscuration that comes from cutting to the chase is ultimately what makes his work so deceptive and such a serious challenge to the viewer.

So it’s not that the works are petite, but that they are wiry and stealthy. They trust our ability to get in there, alone, with the intricate, compressed bud of a picture designed to flower in the responsive feelings that are carried away by the viewer.

So what about this intimacy? My first thought was that it comes from the work’s faux naïve, relaxed charm and from its friendly scale. Or that the works are scaled and installed not to meet the body, as much as the eye: if they were masks they’d fit directly on our faces. But when the viewer finds himself up close to an object, physical intimacy and nearness are sensed not only by the eyes, but by the ears as well. I came to this realization when studying this show. For as much as anything else, Tuttle makes work about sound and listening. Not to silence, but to the air that closes in around the ears, infiltrating the canals. (Again, not unlike Richard Serra’s rusty, Cor-Ten steel behemoths, which achieve scale through acoustic vibrations that can only be understood in the inner ear—tiny vibrations that lead to a perception of monumentality.) Furthermore, don’t all of Tuttle’s works stem from Picasso’s 1912 “Guitar”?

Tuttle’s work is abstract, Cubist and formally topsy-turvy. It may be that he builds from the outside in or as if he were moving backwards in time: first the frame, then the finishing strokes, then broad establishing gestures, and lastly the daring primary stabs in the dark. While I can see it and feel it, I can’t remember it to say what I have seen. All I know for sure is that they couldn’t have been done by my daughter, nor by myself.

Summer Fun by Jeanne Thornton is an epistolary novel that is as much mystery as cultural analysis and rewards the reader by never giving us what we expect or what we think we want.

Louise Bourgeois, Freud’s Daughter, currently on view at the Jewish Museum, presents a wealth of new material that makes us look at her art from an unexpectedly different angle. This new perspective is made possible by a posthumous discovery of a large cache later known as her “psychoanalytic writings.”