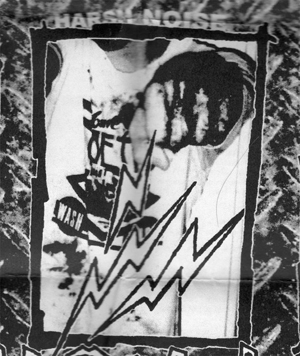 “Face melting” does not do Realicide justice. It’s more akin to skull melting and face imploding. The visceral quality of their primordial screams was buoyed and punctuated by the distressed noise and tornado thuds issuing from an expertly flitted mixer: the umbra of the curled fist. You could almost hear their vocal cords offing themselves as Realicide, the Cincinnati-based noise-core experiment, performed at a small warehouse apartment in Brooklyn.

Robert Inhuman is the locus of Realicide, which has been touring the noise circuit since 2002. I was introduced to Inhuman’s viciously rapine antics in Columbus Ohio. One memorable performance saw Inhuman wrapped in a blanket facing the wall on the gallery floor. The title, “This is a Chance for You to Hurt Me,” left little to the imagination: a handful of peers gleefully kicked him in the back, prompting wheezes and grunts while the rest of us stared on. There was also his vocal snarling, somewhere between hyena and berserker, at the infamous Bearded Synapse Cabaret, where the only discernable word was “hospital.” I’ve also heard whispers about a game of catch he played with a bagful of knives. I was keen to see how he deployed his trademark self-abuse at a noise show.

The group that tours with Inhuman is comprised of whomever he is working with at any given time. The resulting content and performance dynamic of Realicide becomes modular and echoes the lived experience of a creative lifestyle undermining typical notions of a band. This ‘changing of the guard’ concretely represents Inhuman’s openness to experimentation and collaboration as a field of real-life engagement rather than a trope or flavor of the month. Realicide seems invincible. For this tour, Inhuman’s brother, Mavis Concave, played the distortion machinery and mixer while Swill accompanied on vocals.

Swill initiated the set with a slam poem that prompted catcalls from some noise aficionados in the rear, but continued to sputter words until Inhuman leapt in with throat-slaughtering screams and Concave rapaciously keyed the soundboard, fingers striking buttons like falcons on mice. Unlike the guitar or other position-restrictive instruments, a soundboard offers the performer generous freedom of movement. The staple hunching lurch easily segues into spasmodic fits or leaps at the audience. These performative characteristics of noise thrust sound into direct contact with bodily experience. The performer Tik///Tik, out from LA that night, rubbed a contact mic over his neck and face to produce shuttering flakes of static reverberation and walked towards us hysterically riffing “A-YAY-YAY-YAY-YAY” unassisted by a microphone. One of the locally based Halflings’ musicians repeatedly swung his microphone in circles at the amp behind him. The resulting distortion careened in and out of audibility, like a derelict aircraft sweeping low over a citadel. The savage immediacy of such confrontations is way more satisfyingly potent than the overproduced bookishness that stultifies many visual arts performances.

Throughout the set, Inhuman maintained the posture of a zombified baboon, eyes bulging at the audience. Madness was not far off; it hovered deep inside the textured arrhythmic layers of vibration and welled up from the cracks in Inhuman’s voice. As soon as a satisfying riff was established, Realicide would break off into sheer cacophony, drowning out the shrieks of Inhuman and Swill. At one point Swill abandoned his microphone to shout at the floor, his visual embodiment of a scream carrying its blustery power to our collective body. In between numbers, Inhuman would explain the next song or thank his hosts, showing an earnestness that underscores the community’s esprit de corps, an artistic husbandry nourished without professional discourse or mercantile support. Their wealth is in the homes where they play, in the free stickers and leaflets they distribute, in the accessibility of the artists at their events. Realicide’s politics are reflected in this attitude as much as they are in the unhinged anarchy of their performances, or their lyrics: “punk ain’t comfort.”

Resistant Noise is a musical representation of the conflicts and social forces in the United States today.

Frida Orupabo’s solo show at Nicola Vassell Gallery, Closed Up Like a Fist, is a visual encounter with the hauntings of the Black Atlantic archive. Drawing from a rich tradition of literary and visual archives that have aimed to salvage Black femmes from fossilized narratives, Orupabo’s exhibition reads as a cartography of Black femme precarity, delicately pinned up by the resolve to survive.

Craig Starr Gallery’s Myron Stout and Cycladic Art confronts the artist and the ancients, for the first time, face to face. The exhibition is quite literally museum-quality, including four of the iconic black-and-white paintings (that’s a lot—there are only 21 in total), three charcoal drawings in similar format, and a number of the later less-celebrated graphite drawings, startlingly small, in tones ranging from near-fleshy paper to smoky and smokier grays: no black, no white.