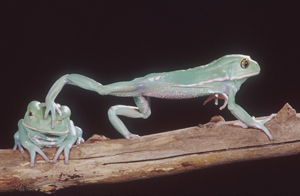 Waxy monkey frogs, which live in the dry Chaco region in Argentina, Paraguay, and Bolivia, seal in moisture by rubbing a waxy secretion all over their bodies. This keeps them from dehydrating in extremely hot temperatures. C Joe McDonald, Clyde Peeling’s Reptiland.

With its Progressive Era mottoes and Teddy Roosevelt statues, the monumental American Museum of Natural History is not exactly the place one recommends for art. With MoMA sporting a forty-year retrospective of Richard Serra, the Whitney Museum’s Summer of Love, and Global Feminisms at the Brooklyn Museum, why, with time-stamped ticket in hand, would an artist want to see a bunch of live frogs and storied fossils housed in a marble mausoleum?

Well, between Frogs: A Chorus of Colors and Mythic Creatures: Dragons, Unicorns, and Mermaids, there is plenty to prick the imagination, tickle the intellect, and boggle the eye the way art, with luck, is supposed to. The premise of Mythic Creatures is simple: literary and cultural myths such as mermaids, unicorns, giants, and dragons are not simply products of imagination but ingenious interpretations by pre-scientific minds when confronted with fossils from long-dead dinosaurs. Or desire, that oomph behind the creative drive, can play a part, as demonstrated by a machine that morphs the zaftig shape of a manatee into the bulging breasts and flowing hair of a mermaid.

Mythic Creatures does not take the fun out of the imagination; it fuels it with real­-world ardor. There’s something life-altering about seeing a skull, absent its paleontological explanation, as a Cyclops rather than the “Dwarf Elephant Skull” that it is. Had Harold Bloom been interested in ancient bones instead of literature, his influential theory of misreading (misprision)—which states that each generation’s strong misreadings of the literary giants preceding them engenders the greatness of their own literature—might have emanated from the skeletons of actual giants. Rather than the nearly blind James Joyce tinkering with Homer’s Odyssey, we have a video clip of a paleontologist demonstrating how the enormous bones of a mastodon are so human-looking that, when rearranged, they become a mythical giant. Presumably, we owe such figures as the giant, griffin and dragon to our predecessors’ misreadings of bones as poetic machinery.

The Frogs exhibit, however, has more of the zing of art. Scale, texture, color (it is, after all, subtitled “A Chorus of Colors”), morphology, creativity, praxis, and awe abound in this small exhibition (small because only 200 of close to 5000 species of frogs are on display). Human imagination has yet to pin Nature’s infinite palette and mastery of form to the mat.

So, what do we learn and what do we see? That frogs are radiant orange, banana yellow, or cobalt blue. Some frogs are tiny (less than half an inch) and others are fat and look grumpy and are even called “Dumpy.” Frogs fuck with a hug (amplexus) from behind. Frogs cling to trees with Gumby-like limbs and tiny bulbous Martian toes that use mucus as superglue. Some frogs dig underground with little shovels attached above their knees while others use snouts and are called “shovel-nosed.” Frogs are poison. Frogs are healers. Frogs have teeth. Frogs have tongues that can pull a small snake, mouse or even a fellow frog into their digestive tract. Like penguins, there are male frog midwives, and unlike anything else, there were frog mothers (now extinct) that gave birth through their mouths. Frogs have eyes that help them swallow. They hear really well and sing even better. They speak to one another through vocalizations but those who are voiceless prefer to communicate through defecating. Their skin appears as a magical, translucent, and even transparent substance (in the species known as Glass Frogs, you actually see their internal organs). The frog’s endless genetic engineering has allowed it to survive since the age of dinosaurs. And, as if this isn’t enough, some frogs even “fly,” jumping wind like a living hang glider. And then there is the Paradox Frog (not on view but described in the catalogue) that begins life as a ten-inch tadpole but ends up, in adulthood, as a two-and-a-half-inch frog!

These gentle, ugly men waiting for pretty women to kiss them into princely dominion are the real canaries in the coal mine. With skin so sensitive to climate change, pollution, or ecosystem trauma of any kind, they are the first to die when their environment is tampered with too quickly. “Too quickly” is the operative phrase because it is precisely their rapid and diverse survival strategies that make them such a rich subject of study. Frogs are the only species found in almost every habitat in the world (one species freezes itself “dead” in winter only to thaw back into life in the spring). New species are still being discovered (such as the charming “bright purple, bloated, short-legged, tiny-eyed frog with a very unusual pointy snout built for burrowing” found in 2003) although extinctions outrank discoveries by the thousands.

Mythical Creatures and Frogs echo the art and writing that has taken science, biology and environmentalism as its material over the past decade (Eduardo Kacs, Catherine Chalmers, Natalie Jeremikjenko, Suzanne Anker, Donna Haraway, Jacques Derrida, Cary Wolfe). But in Frogs, mothers and children, along with singular art-heads like myself, seem to merge into one life form, moving not as a network of social groups but as a rhizome of “wonder groups.” We ooh and ick together, shake our heads in unison, shout and claim disbelief as one; a living, social organism, we become the embodiment of the intersection of science and art.

Goodeve is a writer and interviewer active in the field of contemporary art and culture.

Entering the gallery and leaving behind the traffic noise of a busy weekday Grand Street, I found summertime to be successfully, if disconcertingly and humorously, evoked. Summer, curated by the artist Ugo Rondinone, brought together seven intergenerational artists whose works relate at varying tangents to this apparently straightforward seasonal idea.

Emmalea Russo is the author of G (Futurepoem) and Wave Archive (Book*hug). She was a writer in residence at the Lower Manhattan Cultural Council and the 18th Street Arts Center (LA), and a visiting artist at the Art Academy of Cincinnati and Parsons School of Design. Recent writing has appeared in Artcritical, BOMB, The Brooklyn Rail, Cosmopolitan, Hyperallergic, and the Los Angeles Review of Books. Russo is a practicing astrologer and divides her time between Avon-by-the-Sea, NJ, and New York City.

“It's Our Time Now”: The Aesthetics of Horror in Jordan Peele’s Us

Seemingly out of nowhere, the underclass rises up to seize power. There is widespread pandemonium. As the old world order crumbles, there is a sense that nothing can ever be the same again. What sounds like news coverage of summer 2020 is actually the plot of Us (2019), directed by Jordan Peele.