With the Venice Biennale, Documenta in Kassel, Münster Sculpture Project and the Basel Art Fair opening within a two-week period, Europe has been flooded with dedicated art travellers on their own grand tour. Certainly, from current reports, there seems to be a turn toward more “honest,” less ironic, and, perhaps, more thoughtful art. The question remains whether this kind of work plays well in the noise of large-scale exhibitions like Venice.

Last month’s letter concerning the state of abstraction in England makes Jonathan Lasker’s small paintings on paper at Timothy Taylor and Hauser and Wirth’s exhibition of Joan Mitchell’s paintings from 1961-62 seem like standout shows of the summer. Since these artists are not based in England, it is Varda Caivano’s paintings at the artist-run space that sets a brave tone.

The Argentine artist, based and trained in London, appears to tread difficult and highly unfashionable terrain with her work. The eleven abstract paintings on show, mostly made this year, appear to demarcate a highly romantic and honest view of painting. At heart there seems to be a kinship with Bonnard’s or Braque’s sense for visual structuring, but where the Post-Impressionist and Cubist were deeply involved in the intersection of capturing light and composition, Caivano seems more involved in a journey of creating pictures and working in the space between abstraction and representation.

A small, black and moody canvas, “Untitled” (2004)—all her paintings are untitled—forms the frontispiece to the catalogue and brings to mind early Motherwell, providing some insight into Caivano’s thinking. All fuzzy gestures, scumbling and liquid washes, this oil painting is vague. A couple of lines down each side seem to frame a central, mountain-like shape. On the outer edges, dark washes hem in the central structure. It could be a view of a mountain through a strangely shaped window. While it is not the best painting in the show, it is exemplary in that all Caivano’s paintings tread the same fine line between landscape and painted events that unfold across a horizontal plane. Each hints at or attempts to translate imagery perhaps from memory or from another picture. The result is a mostly haptic and very engaging visual event.

Schooled first in microbiology before turning to art history and later painting, she says that her painting is “a way of questioning images where visible objects with a secret depth appear to reveal a kind of irrational truth. The paintings operate as a bridge, a transitional space that evokes an inner world.” This emotive “inner world,” described by fuzzy gestures, liquid washes and subtle patterns, hints at vague pictorial structuring, but Caivano is at her best when creating a fluid and shifting space held together by patches of color and paint, “pictures” that question their own premise. Unlike Auerbach, whose gestures structure his image, or Hodgkins, whose paintings are abstractions based upon memories yet still appear anchored in reality, Caivano’s best results seem less emphatic statements and more queries into the nature of picture-making. It is as if the process of creation was an attempt to bring the “truth” into focus. Unlike Tomma Abts, whose work seemed to be fully formed when she appeared on the scene, Caivano’s second one-person show in this city demonstrates that she is still exploring her field. 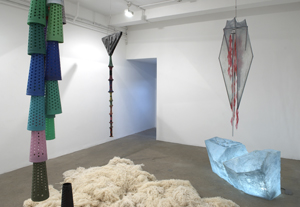 “Basuhaus,” Sam Basu’s latest “extravaganza” at Kate Macgarry’s, is his first solo show in a number of years. In the past, he has been an extremely engaging video artist and humorous sculptor-draughtsman. In all cases the installation of his shows has been theatrical. Walking into his current show proves to be more of the same. It feels as if one has stumbled onto the set of a classic “Star Trek” episode. An unruly pile of yarn mimics a large, furry shag carpet while odd sculptures lean against the wall or dangle from the ceiling. Made mostly from industrial materials like plastic tubing, cardboard and florescent tubes, they look as though they have been “crafted” by a strange but ancient, alien mind. The gallery looks like a showroom for alien furniture. For example, “Undecidability Meme Diffusion” (2007) is composed of cone-shaped pieces of cardboard assembled to form a hive-like structure, backlit with florescent light, and leaning against a wall—John McCracken gone Ikea via Planet of the Apes.

Having relocated to rural central France and converted a factory building into his “Institute of Transmitted Architecture,” which is set up to “monitor the spontaneous descriptions of dwelling and community that appear outside of the architectural world,” Basu seems to have imagined into existence objects from an even weirder inner world. These are definitely not sculptures in the sense of Martin Puryear, Donald Judd or even Phyllida Barlow. Rather like his videos, in trying to articulate this “other world,” there is a left-of-field quality to all of Basu’s work. This is sculpture in a minor key, but a key essential to the music of “Basuland.” It seems to be a small part of Basu’s ongoing world-making, and it is certainly shaping up to be an interesting one. As always, Basu’s engagement in the visual arts constantly forces us to question our expectations of each form or genre; even if it is from a highly eccentric worldview, we are all the richer for it.

As a curator and writer committed to contemporary art, for decades I’ve pursued art that explores and adapts to the nonstop changes in technology and in the people who use it. Upgrade is the name of the game. Praxis means keeping my finger on the pulse by engaging directly with artists—emerging and established—and keeping an open dialogue with passionate colleagues. Everyone adapts in their own way.