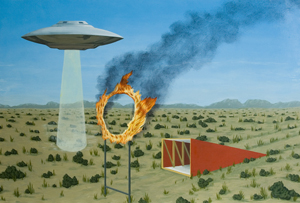 “Local motorist performs death-defying jump through ring of fire and is abducted by mysterious UFO, full details at eleven.” This is the king of breathless tease that baits us into tuning in for the news, or turning to the next page of those supermarket tabloids. Liz Brown has taken note and made this kind of hyperbolic mischief the stock and trade of her paintings. She likes to raise expectations to unsustainable heights and then leave you twisting in the wind.

The scene is a desert; on the far horizon, a line of craggy mountains is visible through the haze; tufts of brush and grass are artificially dispersed over the landscape as in a fractal recreation. At the foot of a dirt track in the right foreground is a red ramp, its flimsy interior exposed at the thick end of its wedge. Directly in front of this, a flaming hoop is held aloft on stilts as its black oily smoke drifts skyward. An ominous 1950s-style flying saucer hovers overhead, its energy beam scanning the ground. “East of Los Angeles” (2007) is an example of the accumulation of comically dramatic props the artist borrows from such “low-brow” sources as Warner Brother’s animations, B-grade science-fiction movies, WWII newsreels, circus stunts and even New Yorker cartoons. This carefully composed scene is characteristic of Brown’s shtick – setting up the rubes, titillating them with the expectation of witnessing some awe-inspiring event. Unfortunately, given the static nature of painting, we’re left waiting for Godot.

Neo Rauch has said that his paintings are “continuations of dreams by other means.” Though this sounds like the rehashed doctoring of classic Surrealism, I have to ask myself if Brown’s dreams are from the sleeping or waking world. Between personal media devices, TV, and advertising that seem to inhabit every neutral surface of public space, modern technology has immersed us in a multi-layered world of discordant images. A world that would overwhelm even the most energetic Surrealist, turning their disturbingly contrasted visions several shades darker. Have we become complacent dreamers, relying on the products of Hollywood or Madison Avenue to fill our psychic image banks? Despite Brown’s sense of humor, there is still a notion that these images are derived from a state that is not quite dreaming, and not quite fully conscious. With the passage of time, everything seems to slip into this state of penumbral reality.

There is something akin to the sideshow barker’s bombastic come-on when, in some pieces, Brown selects props that portend drama or actions to come, such as a battleship firing all guns simultaneously in the darkened night (no idea of where the shells might hit), or a white van rocketing into the sky, launched from a gravel ramp. Frozen in mid-air, we have no clue as to what will happen to the van when it eventually lands. In other works there’s the “blow-off,” as when we see a depiction of the moment just after some catastrophe. With “Sunken Ship” (2007) Brown orchestrates a spectrum of grays to picture a foggy stretch of ocean. In the right foreground, the upright bow of the sunken ship pierces the water with a white flagpole standing defiantly erect on its deck. The pole points across an expanse of sea to a section of the floating stern. What did we miss? Was there an attack? Was the ship scuttled? Where’s the crew? Is this a metaphoric comment on post-coital anxiety? Questions like these seem to be intentionally raised, but not answered. Brown knows that however corny or over-the-top her tableaus are, they can only be effective if the viewers are equally fluent in the understanding and appreciation of the images’ kitsch sources. By employing this type of subject matter, Brown initiates a bond with the viewer as if to say, with a knowing wink, “So you spent way too much time watching re-runs on TV and reading supermarket tabloids too.”

The paintings are canvas mounted on wooden panels, a technique that guarantees a rigid, uninflected support and facilitates the sanding and polishing that suppress overtly expressive brushstrokes and lend the paintings an enamel-like surface. This “licked” surface recalls the finish of 19th century academic painting or, more appropriately, the slickness of a TV screen or a computer monitor. Brown’s palette is a closely keyed selection of designer tints and tones that varies from the feel of slightly faded 1970s graphics to the sun-bleached colors of a slightly skewed Southern Californian Photorealism.

There is something missing in all the paintings though, and that’s the presence of people. With all the forces pictured here—from dinosaurs to battleships to anthropomorphized answering machines—we’re left with a gap where the protagonist of the narrative belongs. Brown’s final trick might be to let this vacuum of omission suck the viewer into fill the void and finish the stories to their own satisfaction.

The first thing I notice is the timbre of your voice as you tell me about alternative practices of reading, though I mean to begin with a more visual cue per the instructions of this prompt. Beginning with the sonic register of paperless notifications, audiobook mimesis, conversations over gluten-free snacks, I think, is not the alternative but the normative practice because it keeps us closer to vernacular praise, where we all need to be as people of the future. Anyone who has had a great teacher will recall a literal voice, and that is still what I hear when we converse silently: the teacher is a work of art because she travels in her own timbre.

Death of a Theater

On the fortieth anniversary of the destruction of two legendary Broadway theaters, the Rail takes readers to the moment of demolition, spotlighting the activists who tried to stop it.