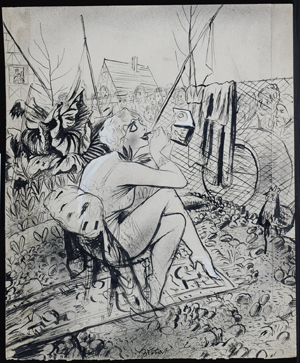 From Berlin to Broadway is the Kurt Weill-inspired title of an installation of 43 early-twentieth-century German and Austrian works on paper that the Morgan Library & Museum received in 2005 as a bequest from Broadway lyricist Fred Ebb (1928–2004). It is a concise and novel group, adding nuance to a variety of other recent exhibitions dedicated to this particular period. It auspiciously coincides with the excellent Van Gogh and Expressionism exhibition at the Neue Galerie and follows Glitter and Doom: German Portraits from the 1920’s, which closed at the Metropolitan Museum this past February.

Since the opening of the Neue Galerie in 2001, exhibitions of German and Austrian Expressionist art have become more frequent in the US; perhaps contemporary political, economic, and social turmoil is the reason behind this renewed interest in war-torn Germany and Austria. In any case, the Ebb bequest marks a significant contribution to the Morgan’s new mission to extend its focus to include 20th and 21st Century works on paper.

However humble this show might be in comparison with the above-mentioned exhibitions, From Berlin to Broadway offers the opportunity to view largely unknown or under-exhibited works by leading German Expressionists and Vienna Secession artists. Max Beckmann, Egon Schiele, Otto Dix, George Grosz, Oskar Kokoschka, and Ernst Ludwig Kirchner are only a few of the big names among the twenty-two artists represented. It also provides us with valuable insight into one collector’s vision and taste. In 1966, in preparation for the Broadway musical Cabaret with composer John Kander, Ebb began to research Expressionist art of the Weimar Republic. As a result, his Broadway staging, and later the film sets for the movie version, were highly evocative of the urban scenes and the socio-critical portraits of George Grosz and Otto Dix. Ebb began assembling his collection with the help of collector Joan Fisher in the late 1960’s following the success of the musical.

Certainly, a collector is bound to a few variables other than passion and knowledge of his subject, like market availability and pocketbook size. Ebb’s collection is unpredictable in that it democratically combines fine and slight examples, expressive sketches and oddities. A conservative landscape by Otto Mueller depicting a patch of water behind trees contrasts with a breathtaking self-portrait by Schiele. Compared with Schiele, Mueller lacks intensity and emotional ferocity; in fact, he appears (wrongfully so) tame. One of the exhibition’s curiosities is Emil Nolde’s “Conferencier.” This vibrant study of a Berlin nightclub employee is unusual subject matter for Nolde, who disliked leaving his rural home and is largely known for abstracted and deeply saturated landscapes and religious portraits.

Considering the above-mentioned variables of collecting, it comes as no surprise that works by second-tier names are often of higher quality and more satisfying. Erich Heckel’s anxiety-ridden self-portrait and the hilariously satirical depiction of “The Film Star Spends Two Minutes in Her Parents’ Garden” by New Objectivity painter Karl Hubbuch are simply superb. A dark work by Worpswede painter and Rilke confidant Paula Modersohn-Becker, showing a peasant woman slowly moving through a dark Northern German landscape, is a rare sighting of this artist in an American institution. It is also far from the thickly layered compositions that secured her status as a radical innovator overseas. Much of this work might be more enjoyable for a viewer with a scholarly background in the period or a detective’s desire to connect the dots. But then, the Morgan has always been considered primarily a research sanctuary. Even as it moves into modern and contemporary terrain, it remains loyal to its legacy as an exceptional place for the specialized and sincerely focused.

Picking up the first issue of Berlin in April 1996 was like coming upon something one had imagined but never expected to encounter: historical fiction in the form of a comic book bearing both literary aspirations and compelling, art historically savvy imagery.