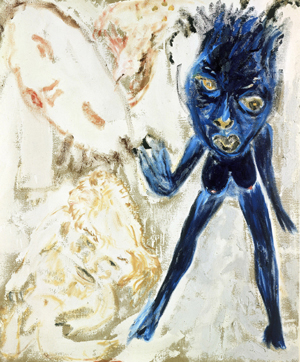 This is some strange, gutbucket picture making. Like an electric guitar, sounding tinny and raw without amplification, or the taste of a stone after days without water, Don Van Vliet’s uncouth, dry pictures claw their way out at us. Far from pretty, and barely understandable, this is nonetheless a compelling exhibition spanning ten years’ worth of artistic output. Captain Beefheart is Van Vliet’s musical doppelganger; he fronted the Magic Band, and from the 60’s to the early 80’s they threw together some damn interesting concoctions of experimental American musical styles and bizarre sounds too enthralling and complicated to go into here. Somewhere around 1982 Beefheart split the scene and Van Vliet stepped forward with his paintings, drawings, and poetry—mediums he’d always practiced.

This exhibition at Anton Kern Gallery includes a sampling of paintings and drawings (which, sadly, are not on view. They are housed in the gallery’s back room and may be viewed upon request) from the ten years mentioned in the show’s title and runs in conjunction with another exhibition of the artist’s work at Michael Werner’s uptown gallery. There’s an odd sameness to these pictures, something unexpected from the mind that brought us “Trout Mask Replica.” It stems from the paintings’ chromatic intensity—mostly the primaries with ochre, earth green, brown, the occasional dash of magenta, an inordinate turquoise, and a generous dosage of black and white. This barren palette, raw and earthy, has stayed pretty constant for ten years. All the colors have that straight-from-the-tube feeling, as there is little painterly lusciousness anywhere. The surfaces are singularly dry, sometimes with large areas of canvas exposed to view. It creates an aesthetic akin to the sounds found in much rare, rural American music, like the ringing clang of Bukka White, or that beautifully dull phonographic scratch found on old records—constants that resonate through and inform the music they’re tied to. How Van Vliet pulls this off so persuasively is a bit of a mystery.

Pictorially, the images range from the recognizable to the abstract, often both in one painting. They are populated with a strange menagerie of people, plants, beasts, and spirits, or some approximation thereof, who slap and skid in and out of each other. Their interactions are vaguely familiar as they seem to gesture in conversation or fade into some squiggly mass of pigment. In “Crepe and Black Lamps” from 1986, for example, the left half of the painting contains a large-headed, inky-blue demon bitch, tits akimbo, goggling out at us and beckoning with some sort of quasi-invitational warning. Floating, thinly articulated faces surround her—dry, transparent masses of protection or memory without logic. They seem to owe their allegiances to an earlier time in painting. Pollock’s “The She-Wolf” comes to mind, as do James Ensor and Jean Dubuffet.

There’s a point in viewing “Cross Poked Shadow of a Crow No. 1,” (1990) at which the loosely articulated, heavy black marks tumbling across the surface of the painting flicker into a composite recollection of all things mentioned in the painting’s title—then just as quickly revert to physical pigment on canvas. It’s a place in painting (and our minds) where elucidatory images of unnamable things resonate, a fleeting exposure to that unknowable, liquid occurrence that lies outside concrete experience.

Vliet’s painting speaks to places and exchanges outside decent logic and polite harnesses, far from any easily digestible theories or forms. Where the stare decisis of accepted normalcy is dragged into the miasma and cracked like an egg. This yolky mass bleeds to the fringes of our understanding, to those peripheral and marginal borders that exist not in dark recesses but dwell in lightness and heat, baking and transforming the broken embryo into a crusted surface, all the better for its journey.