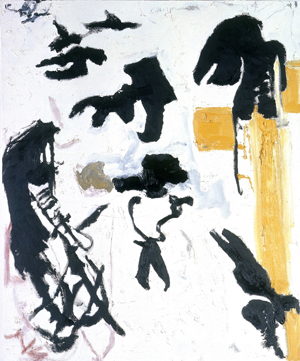 Don Van Vliet is at least three complete entities that people have all too predictably tried to jam into one persona better known as Captain Beefheart. But trying to make Don Van Vliet the painter and Captain Beefheart the musician and songwriter, not to mention Don Van Vliet the poet, fit under one umbrella, is like trying to climb Mount Tamalpais backwards. One can do it, but what’s the point? By now the death of the self should at least allow that a very few among us–and here I am thinking of Rosalyn Drexler and Bruce Conner, who, it should be added, once claimed to be Dennis Hopper–have actually achieved distinction in fundamentally different mediums. Let it be said for once and for all, Van Vliet doesn’t need the cover of Beefheart to be taken seriously as a painter. What the painter and musician-composer do share is their independence; when looked at or listened to, their work has little to do with fashion.

What follows is the story that I heard from A.R. Penck and subsequently corroborated with Van Vliet in a phone conversation. He was living in what amounts to a house trailer in the Mojave Desert and devoting all his time to painting when Penck brought his dealer Michael Werner to see him. Penck had first seen reproductions of his paintings on Captain Beefheart’s album covers. Penck, who was a central figure in neo-expressionist painting, felt sympathetic to what he saw, and got Werner interested. Now, nearly twenty-five years after Van Vliet began exhibiting his paintings, and neo-expressionism is no longer trendy, it is clear that whatever affinities he seemed to share with neo-expressionist artists (awkward depiction of the figure, fast application of paint, and shallow ambiguous space) are rendered largely meaningless by the art. In his best work, Van Vliet is not simply singular in what he does: his paintings and drawings can stand next to anything by Susan Rothenberg and not suffer in the comparison.

In the three paintings titled “The Drazy Hoops,” all from 1997, Van Vliet depicts a black dog-like creature at the bottom of the painting, against and imbedded in a thick white ground. A yellow form (is it an animal or a thing?) seems to be mounting the dog, and floating above that is a black linear structure. If you think that the painting juxtaposes the representational and the abstract, I think you are going down the wrong path and following a useless art historical distinction. This is a painting of living forms within a stark landscape, a place where everything is as interesting and important as everything else, even when we recognize one thing and not another, which is so often the case in any circumstance. Van Vliet doesn’t use a style to knit the painting together. He goes from applying the paint dryly with a brush to seemingly laying it down with a wide palette knife. He will use a tiny brush to make one thing, the handle to scratch the surface, and a different sized brush to make another form. Each is distinguished both by the way it was made and by the way the paint is applied or removed.

There is something stirring about the fact that Van Vliet applies the paint in so many different ways, as well as his irreducible vocabulary of form. One would think the paintings wouldn’t hold together, but they do by some force that has little to do with art historical conventions. Sometimes you feel like four different events are occurring simultaneously and independently of each other, but then you begin to think that it is all one. Even the ground, which might be scratched and elsewhere built up into a thin ridge-like form, is active. Looking is intense and sensual. Depiction and application are not separate in a Van Vliet painting, and these different unities suggest the artist’s deep reverence for the natural world. Nothing should be reduced to a style.

A final note: the most recent paintings were done a decade ago. Other than a dozen notebook drawings done in 1999 (these were at Anton Kern), I don’t think any later examples of Van Vliet’s works have been exhibited. Whatever he is doing, I wish him the very best. In the meantime, I believe a monograph focusing only on the paintings and drawings is overdue.

The Metropolitan’s concise retrospective—an abbreviated version of what was shown at London’s Royal Academy—presents the printmaker and painter as a merciless interpreter of his environment and its characters.

About midway through the National Gallery’s exhibition Andrea del Verrocchio: Sculptor and Painter of Renaissance Florence, you find yourself standing in front of a beautiful young woman carved from marble that has mellowed to a honey-brown hue.