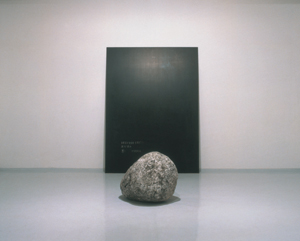 This is the fifty-second edition of the Biennale di Venezia since its inception over a century ago. Clearly, the institutional notion of art—that is, art under the aegis of the nation-state—has given way to corporate sponsorship. While this is probably the best of the Biennials since 1999, it may also be the last to function convincingly as an exhibition with a cultural purpose. In the early twentieth century, the Giardini allowed visitors to meander from one pavilion to another as a form of humanist dialogue or cultural exchange. In more recent years, the market has gradually usurped the Giardini vision. One might say that economic globalization has obliterated any such notion once and for all. Rather, this former grand-style exhibition has become a competitive sequence of spectacles. Whether these spectacles are major or minor, lavish or reduced, academic or entertaining, exorcistic or demure is not the issue. They are spectacles to the extent that the pavilions deceptively function as “official art” wrought from the major collecting institutions in the western world. Consequently they represent diversions from the possibility of reflecting on ways to consider alternative models. Fortunately, this Biennale di Venezia has surreptitiously offered an alternative to official art through a group of provisional spaces—both common room-size storefronts and some gorgeous interiors of rented palazzi that line the canals of Venice. Many of these spaces outside the premises of the Giardini or Arsenale are filled with first-rate exhibitions. I will discuss two examples here. One is a mesmerizing exhibition of supremely reduced paintings and sculptures by Lee Ufan, a Korean-born artist, who divides his time between Japan and Paris; and the other, a tour de force entitled “Artempo: Where Time Becomes Art,” curated by Axel Vervoordt and Jean-Hubert Martin (among others). These exhibitions reveal everything that the Biennale should, but unfortunately does not, contain: breadth, width, height, tactility, memory, imagination, physicality, the recall of history, and the phenomenological awareness of
time and space.

Lee Ufan is shown at the Palazzo Palumbo Fossati, a modest yet exquisite series of rooms filled with ambient light. A simple, intimate courtyard showcases three of Lee’s steel plate and stone sculptures. Westerners, in particular, might call Lee Ufan a Zen artist. While this is not incorrect, it does not fully explain the complexity of his work in visual and conceptual terms. His stones are boulders—not huge, but heavy—and his steel plates are usually flat-cut rectangles, occasionally rolled slightly in order to give the surface an undulating affect. His paintings over the past seven or eight years consist of one, two, or three marks made with a large brush. Lee Ufan’s brush marks are not exactly strokes in that they are performed very slowly without breathing over the duration of several minutes. At times, the steel and stone sculptures and the single brush mark paintings are installed in relation to one another. The point of this placement is to show the way in which these works alter the space. The material arrangement is as much about precision as intuition. It is nearly impossible to discern where one begins and the other ends. Most likely, they are the same. The fact remains that intuition and precision exist without equivocation in their illumination of space and time, thus transforming material into a perceptual experience of dematerialization. Such a transformation does not happen through complication, but through indelible complexity and a reduction to exact proportions.

Axel Vervoordt and Jean-Hubert Martin’s exhibition, “Artempo,” is quite different from Ufan’s. It reverberates within the space and between the various objects included in the Palazzo Fortuny. Many of the historical objects from the institution’s collection are labeled in the exhibition as “Anonymous.” These include numerous wooden dolls and life-size mannequins, once used in medical classrooms, clothing and novelty shops, and even drawing studios. Today they cast an eerie spell against the interior, unfinished brick walls of the palazzo. The curators chose to leave these objects, along with other bizarre carvings, snake skins, tortoise shells, spears, furs, and basketry from outlying regions in both hemispheres, to interact with works by such artists as Lucio Fontana, Marcel Duchamp, Jean Dubuffet, Shozo Shimamoto, Hans Bellmer, Yves Klein, Alberto Giacometti, and Medardo Rosso. In addition to these Modernists, there are contemporary installations by Louise Bourgeois, Tony Cragg, Jan Fabre, Marlene Dumas, Kimsooja, Richard Serra, Marina Abramovic, Cai Guo-Qiang, and a major, room-size work by the Polish painter Roman Opalka.

Since 1965, Opalka has been painting small numbers in orderly rows, always in chronological sequence. As his work has progressed over the years, he adds one percent of white pigment to the black surfaces. Eventually they turn gray, then lighter gray, finally verging on white, rendering the white numbers almost entirely invisible. In the process of painting the numbers, Opalka records himself speaking the numbers in Polish. For the installation at the Palazzo Fortuny, a large beatific bronze Buddha was shown with a discreet selection of the recent white canvases. Listening to the barely audible voice of the artist (who is now in his mid-seventies), the gallery at the Palazzo seemed transformed into a Buddhist temple connecting with the work of Lee Ufan at the nearby Palazzo Fossati. This coincidental effect, signifying peace and tranquility, offers a clear alternative to the various academic anti-war protests mounted in the corridors of the Arsenale.