The Music of Toby Goodshank 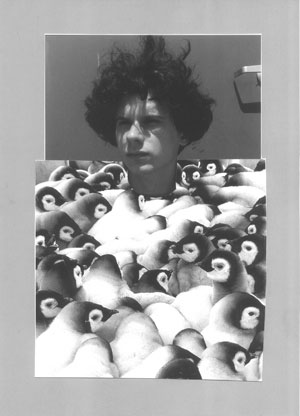 I wonder how many New Yorkers visit, or even know about, the roomful of unicorns in Fort Tryon Park. In the belly of the Cloisters, the Metropolitan Museum’s medieval enclave tucked away on Manhattan’s northern tip, spears and snarling dogs charge across six of the seven Unicorn Tapestries, created between 1495 and 1505. (Spoiler alert: It doesn’t end well.) But one tapestry, The Unicorn in Captivity, stands apart from the hunt series.

Scholars say that this unicorn, lightly tethered to a tree inside a low fence, represents a lover willingly ensnared. The imagery, from ripe pomegranates and wild orchids to a frog, is all about fertility. Not a bloody spear in sight.

The Cloisters’ unicorn room seems a fitting place to visit with Toby Goodshank, Brooklyn-based singer-songwriter and founder of indie label Unicorn Sounds. The label’s logo, a puffy, Care Bear–esque unicorn head, is tattooed on Goodshank’s chest. Beyond that, there’s some sort of kinship between a slice of the Middle Ages seated in bucolic verdancy on the island of Manhattan, and Goodshank, a driven, off-the-wall artist with a folk-rock sensibility that can feel very much out of place in NYC’s indie-rock world. So on a balmy March Sunday, we took the A train to 190th St. and discussed Crispin Glover’s new film, the struggle to find a record label, and the state of “antifolk.”

I first met Goodshank, a twentysomething Brooklynite, by way of Newtown, Conn., in 2003 at a Kimya Dawson/Bonfire Madigan show in Williamsburg; organized by the ubiquitous Todd P. It was the final show at the Right Bank Cafe in South Williamsburg. Goodshank, like Dawson a member of the indefinitely on-hiatus Moldy Peaches, handed me a self-released CD: Put the Devil Where You Hang Your Hat, his fifth such release in the previous two years. Fast-forward to 2007, and the receptionist-by-day has self-released nineteen CDs—not including the work of his multiple side projects. When it comes to Goodshank, the first shocker is his bizarre prolificacy. The second is that the majority of his songs are good, really good.

Several years back, a CD landed on my desk at New York Press. Call It What You Want: This Is Antifolk, it declared. Put out by Olive Juice Music (the label of Major Matt Mason USA, who has released all of Goodshank’s solo work and recently sponsored OJ All Day, a showcase of OJM’s artists at Cakeshop), it contains twenty tracks from a range of New York musicians: Adam Green, Kimya Dawson, Seth/Dufus, Jeffrey Lewis, Major Matt’s band Schwervon, and others. Goodshank provided the cover art. At the time, the term “antifolk” was making the rounds; people knew the word, but no one outside the scene seemed to know what it meant. Kinda-sorta folk-rockers, but NYC-style? Sometimes. “I think the main problem was/is that the term is often seen as defining a genre rather than a community,” says Dawson, who now lives in Portland, Ore., and puts out records on veteran punk label Kill Rock Stars. “It doesn’t make sense as a genre, because the types of people who identify with the scene are too diverse. [It’s] confusing now as a definition for a community, too, since the community isn’t as centered around Sidewalk Cafe and the Raven and has moved on to a number of different venues.” Others are less evenhanded: “The thing I always get asked is, ‘What is it? Describe it.’ I’m tired-a wrasslin’ with it,” says singer-songwriter Diane Cluck.

If antifolk has been the context, the only genre that comes close to capturing Toby Goodshank is folk rock, but he defies its boundaries again and again to create a sound that is soundly his own. A certain weirdness reigns—less creepy than Will Oldham’s incest rock, but way less wholesome than Joanna Newsom’s harping—along with occasional weirdo explicitness. In “Army of Love,” for example, an angry ex-lover casts aspersions like you’ve never heard: cunt schlab, goose wreath, yam sac, cock teeth. Cover your ears, Kate and Anna McGarrigle. From CD to CD, you might hear keyboards, banjo, dialogue from The Godfather or a Kubrick film, strings, drums, mandolin, or electric guitar. But some of Goodshank’s most compelling work consists only of his voice, his words, and his acoustic guitar.

Goodshank fashions vivid imagescapes comprising the good, the bad, and the downright grotesque. Figures in his songs range from the pedestrian to the “pregnant and alone, cripplingly stoned” to “foreign spies crossbred with elves.” Songs can be trippy, fantastical ballads or—like “sunrise 2 sunset,” from his new CD Everything Intertwingles—brutal and concise: “In the time it takes you all to wake up and find out the suffering is done / In the morgue you’ll find him, full circle, plum-colored bruise around his mouth / Squandered life of excess/ I’m no jukebox / Just a man with phony friends / They bullshit me from sunrise to sunset.”

“Toby’s work has a kind of compost quality to it,” says Diane Cluck. “He takes junk from human existence and processes it so that somehow the resulting stuff is very much living and thriving. His mutant shapes feel friendlier and more interesting than the toxic stuff he started with.” Goodshank houses those mutant shapes in unconventional song structures and guitar chords and expressive, complex melodies. To him, all the songs involve taking a painfully honest look at himself and his feelings. “As the years go by, I try to use my art to help strip away the layers of bullshit,” he says. That’s not so unusual, but the world through which a Toby Goodshank album wends certainly is. Magical denim vests that deflect fecal bullets, a diva sliced in half, clear and crispy morning air, PCP that smells like angels burning, and fiercely bizarre expressions of sexuality—all of this from a guy who, when I first met him, reminded me of a Hobbit from the wrong side of the tracks.

A month or so after the Cloisters excursion, I head to Bar Matchless near McCarren Park in Williamsburg to see Goodshank play. Walking in, one would never know there was a space for music in there. You walk to the side, then to the back, down some steps, and through an unmarked door. Voilà: a narrow, brick-walled room reminiscent of the old Luna Lounge, with one saggy sofa and an iffy P.A. rig. Attendance tonight is sparse. But even with fifteen people in the room, all of whom likely know each other, two boneheads do their best to talk over Goodshank as he plays. One is a member of Bobby Dazzler; Goodshank organized tonight’s show as a CD-release party for the band, whose members, he says, taught him how to play music back in Connecticut—a classic example of the student surpassing his master.

Tonight is also an example of Goodshank’s love of collaboration and commitment to community—whether it’s called antifolk or something else entirely. When his set begins, Rachel Browne, who sang on 2006’s Di Santa Ragione, climbs up on the barstool next to him for duets that remind me of sweet, punk-folky Three Shades of Dirty, an early-nineties collaboration between Dan Littleton (of Ida) and Jenny Toomey (of Tsunami). Goodshank often plays with others: His sister Angela and Crystal Madrilejos have sung on his CDs, and the three of them make up a band called the Tri-Lambs. Angela and Crystal have a band called the Babyskins, and Goodshank and Angela compose Double Deuce. After his solo set, Goodshank’s campy duo Bearded Witness plays a few songs. And not on the bill tonight are his bands Christian Pirate Puppets and, of course, the Moldy Peaches. Yes, there will be a quiz.

The simple production of Goodshank’s CDs means you know what you’re going to get live. But what the CDs don’t convey is the visual: Goodshank has that “it,” the stage presence that distinguishes the artist from the artiste; it demands your attention. (Unless, that is, you’re the cretin who won’t stop talking.) This is why so many people move to New York, I think: to stand in some bar’s back room and listen to music, relishing the lack of a crowd but looking forward to the day when the artist is packing respected venues. But mainstays like Tonic and Fez keep closing—even the Knitting Factory is now in jeopardy—and while I don’t think New York’s independent-music scene is disappearing (or just moving to Ridgewood, if Todd P’s shows are any indication), it’s hard not to feel nervous.

That day at the Cloisters, it took my eavesdropping on a group of German tourists for either of us to realize that the horn of an Einhorn, aka unicorn, was in the room with us the whole time. It is, of course, a narwhal horn, there to demonstrate the mythical creature’s likely origin. On “Carbombs and Confetti,” Goodshank sings, “I spent my youth chasing after B-sides.” Even in a New York that’s said goodbye to CBGB and hello to million-dollar Williamsburg condos, stumbling onto the unexpected wonders of B-sides and unicorn horns is still part and parcel of everyday life. Thank goodness—er, goodshank.

A writer based in Jersey City, Kate Crane is writing a memoir about her father's 1987 murder.