An Interview with Leif Solem 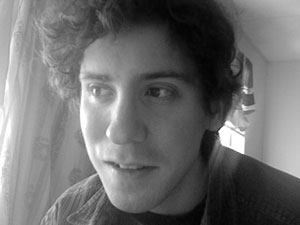 “The sixties crowd is always trying to monopolize how good the music was,” says Leif Solem. “It’s just not the case. There’s a lot of shit going on all the time. It doesn’t stop.”

Two years ago, I’m not sure I would’ve agreed with him. Then one day I received a package from a stranger. Inside were three homemade CDs. This is rarely good news: The world’s awash in desperately awful musicians, and I’d already heard my fill. Still, perhaps with a sick desire to confirm something, I put one on the stereo.

The recordings were decidedly low-fi, but I just couldn’t stop listening. This guy, whoever he was (the name on the package was “Leif Mulch”) was writing songs that were unlike anything I’d heard in a long time. They weren’t verse–chorus–verse, and they weren’t guitar/drums/bass. They weren’t folk or punk or rock—though they were awfully catchy. Most of them told odd little stories about strange people. The writing was sharp and clever, and the instrumentation was unexpected, often improvised.

Moreover, these weren’t just collections of songs; the discs were carefully crafted singular works—and he was churning them out at a frightening pace. At age thirty-four, Solem (aka Leif Mulch, aka Bulk Mulch) had already written and recorded hundreds of songs—a respectable career’s worth.

He was clearly in possession of a unique sort of genius—a multi-instrumentalist with a solid voice who wrote remarkable music. (How can you resist a song that opens, “Under the pier lives a junkie whore with a love seat and a chin-up bar”?) So why hadn’t anyone heard of him?

In fact, the idea of radio play or a record deal seems alien to him. The question then becomes, why does he keep recording entire albums, one after another? “I can’t help it,” he says. “Heredity? Stupidity? It feels really good, though—just physically it feels really good to sing. I like how it feels in my brain when it remembers my own songs, or other songs. I think I could happily sing ‘Goodnight Irene’ over and over forever.”

Solem, who cuts a small, almost elfin figure, was raised on Staten Island. His parents were ecclesiastical singers at various NYC churches, and he was a choirboy by age nine. “My parents got divorced when I was eleven, and they put me in this all-boys-choir boarding school—St. Thomas, in Midtown. I used to call it ‘St. Dumbass Queer School.’ Nobody thought that was funny but me.”

He says the school was a grueling machine, and a lot of what he does now is in reaction against his experience there. “By the time I got out of boarding school, I didn’t want anything to do with anything musical. My voice was changing, and I’d spent three years with no girls…Music was the last thing on my mind.”

At fifteen, however, he returned to it when he and his mother (a teacher and missionary) moved to Taiwan. “I decided to reinvent my entire character,” he says. He already played piano, cello, and violin at that point, but in Taiwan he began playing the drums and writing songs.

“I’d been writing little stories. But somehow they kept ending up rhyming. I really found that rhyming was fun and comforting. So then I was writing lyrics. When I got to Taiwan, this guy read one of my lyrics and said, ‘If you’ll let me, I’ll set this to music.’ He had a guitar, but could barely play. So he set this one lyric of mine to music, and I was watching him do it and thought, ‘Wow, fuck, man—I could do that.’ So I went and got myself a guitar…I never took lessons, but that’s the thing, I had significant music theory. I’d been singing all kinds of Bach and Handel, pretty serious stuff. So I had it there somewhere. I’d played the piano and the cello. So it wasn’t that big of a step—just ‘how does this apply to what I already know?’”

When he returned to the States shortly before his eighteenth birthday, he’d taken on the persona of Songwriter Guy. “Even though I didn’t have any songs.” By the mid-nineties, however, he had amassed quite a few, and began recording them under the moniker “Bulk Mulch.” “I was up in Kinderhook, in Columbia County…My mom lives in a converted church, and next to the church there’s a greenhouse, so I made that my studio. I’d have a Panasonic boombox and record something onto it, then have another one across the way and that would play the drum beat through the open air to the other one with me singing. It got to be pretty hissy. But it was fun.”

He formed a band (Smelt) with some friends in Manhattan, and they played the Sidewalk scene for a bit. All the while, he was recording his own music. “Finally my bandmates and friends got tired of the hiss, so they pitched in and bought me a four-track,” he says. “That was the real beginning…Bruce Springsteen recorded Nebraska on a four-track, didn’t he? I don’t even like Bruce Springsteen, but that record just kills me. I don’t know how to make a four-track sound that clear. I’m not sure that’s what I’m after, either. I don’t like things to be too clean.”

In 2003, while living in Brooklyn, Solem and two friends from school formed Antique Sixguns. They played regularly around Brooklyn and recorded two albums before breaking up in 2006. Since then, Solem seems to have entered a period of unprecedented productivity. The songs keep pouring out of him. “They say John Lennon got ‘Happiness Is a Warm Gun’ out of a magazine,” he says. “I get a lot of mine out of stuff like that.”

His songs, in fact, seem to come from everywhere—his neighbors and friends, apartments, the news. In some cases, the subject is pretty clear: “Sputnik Woofer” is about the first dog in space (who burned up in re-entry), and “Kitty Hawk” involves the Wright Brothers. Others are a little trickier. He wrote “Microbe” after breaking up with his girlfriend and moving into a new apartment in Troy, NY.

“I pulled something at random from a box to get the unpacking going, and it was a Coca-Cola bottle opener, the kind you mount on a wall. So I thought, ‘Okay this is as good a way as any to begin.’ But one of the screws got completely stripped halfway into the doorjamb. After a minute I threw down the screwdriver and sat on my folded-up futon to pout. ‘My screw is stripped,’ I said aloud, looking out the window. ‘Sounds dirty.’”

Not long afterward, he had the verse:

One thing I was curious about was Solem’s tendency to end his songs in mid-line. In some cases it’s clear there’s a joke involved. In others, the songs just stop. He says it’s akin to visual art. “It’s just there. It’s not like music, or dance, or movies—you see the thing and it’s just bam, you’re in the moment. If you make the song be this tiny little thing, and it just quits on you, well, that’s it. That’s how life goes. That’s how girlfriends go. Eating, jobs, everything. Deer crashing into your car, whatever. Suddenly you’re in a whole new place.”

In the end, Solem doesn’t seem to be driven by the same dreams of stardom that propel most people who start making music. He just breathes music, is all, and if a few people like it, great. “Just knowing that you’ve had a real effect on someone is enough,” he told me. And as it happens, he received that confirmation the day before we spoke, from a friend in the Canadian army.

“He wrote to tell me that these guys were blowing shit up. They were up in the tundra, way the hell up north somewhere, blowing things up, listening to the Antique Sixguns…You know, I have some little memories squirreled away so that as I’m dying I’ll think of them—and that’s way up there. That’s victory.”

Leif Solem may be contacted at
[email protected]