Illinois
What the Hell Do I Know?

This EP plays like an indie-rock greatest-hits compilation. Starting off with “Alone Again,” we get the stylings of Ambulance LTD; there’s “Nosebleed,” a nice Beck banjo-hillbilly stomp; “What Can I Do For You?” has a nice Polyphonic Spree melody; “One on One” channels the New Pornographers; etc., etc. But despite that, this is not a rip-off band—Illinois is not a slave to its musical peers. They have crafted solid songs that use those influences to create something new, vibrant, and original. This seven-song EP is consistent and flowing and beautiful; it’s personal and intimate and as open and soaring as the blue summer sky.

Army of Me
Citizen

Oh my lord. Talk about an IV straight to the veins with high fructose corn syrup. (And who picked the name for this band? Good god.) The weird part is that Army of Me has been touring for quite a while and was voted “one of the top unsigned bands” in 2005 by Alternative Press. I have no idea why. Perhaps they should have been named “best band to remain unsigned.” I haven’t heard sugary pop modeling itself as something alternative like this since Goo Goo Dolls or Glass Tiger. This might be fine for some thirteen-year-old girls pining about love and finding their way in the world, but I’m praying even they’ll figure out that this is pure schmaltz. Which shouldn’t be too hard, based on lyrics like this: “It’s hard to have strength when there’s nothing to eat / And it’s hard to eat when you don’t have the teeth…It’s hard to accept what you don’t understand / And it’s hard to launch without knowing how to land.” Ouch. 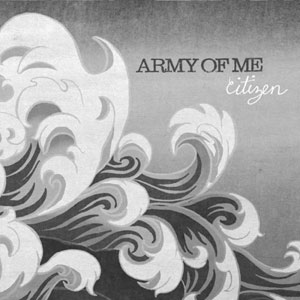 It’s been a while since I have included any music in the dreaded “electronica” category in my repertoire. The only bands that have qualified since I was wearing goofy Gumby pants at D.C. warehouse raves ten years ago are Phoenix and Stereolab, and they’re both reaches. So you’ll have to pardon my reluctance to let said music back into my life. Yet Fujiya & Miyagi’s Transparent Things left me both pleasantly surprised—and perfectly bored. The opening track, “Ankle Injuries,” had me hooked with a syrupy-sweet drive and rolling mini-crescendos; I could see this song remixed into a club stomper. Sadly, general aural malaise begins to set in shortly thereafter. Jumping bass riffs, half-assed guitar hooks, afterthought effects, and terrible lyrics do not invite repeated listening. Heck, most of the album needs to be remixed; it’s practically begging for better sonic destinations. Luckily, one track stands head and shoulders above all others, and it should be blared on car rides and rooftops all summer long: “Transparent Things.” It’s a killer groove that steals from both eighties pop and nineties late-night “chill out” bands. It sucks you into a warm smile and foot-tapping mercilessly to an undeniably catchy beat. So my question is, where did this inspiration go for the rest of the album? Why torture us through ten songs just to get two good spins? Clearly the potential is there, but the execution is not. Fujiya & Miyagi need either better headphones or a good pair of glasses to see the same thing.

Bang Gang
Find What You Get EP

Well, apart from the unfortunate band name, there’s not a whole lot to write about here. The one standout item on the disc is the title track: a dreamy Brian Wilson–tinged tune with a nice backing beat that makes the song perfect for driving to. It sounds like they’re singing about something sad, but when the songs ends you feel soothed. Of the three other songs on the EP, both “It’s Alright” and “Follow” die on the operating table, victims of their own methadone addiction. The final cut is a live version of the title track that the drummer plays at double speed, ruining the song’s haunting texture. Buy the one track—don’t bother with any of the others.

Every Move a Picture
Opposition Party

This is a rather solid EP—if you like guitars, synthesizers, and dance rock. That isn’t usually my favorite music, but this EP is infectious. “Signs of Life,” the disc’s opening track, is a rock–electric hybrid that just bleeds energy, which the group is very adept at building in their songs. Think Eddy Grant and “Electric Avenue” with a touch of Bloc Party. “Chemical Burns” has more of a garage-band funk feel, but it still chugs along like a freight train at a toe-tapping pace. “Saint John’s Night” is solid; it has a sheen of the Killers’ symphonic leanings, but not enough to distract you. If their followup LP (Heart=Weapon) continues the trend, consider it a keeper.

David Fincher's latest, Mank, an iconoclastic biopic of Citizen Kane screenwriter Herman J. Mankiewicz, proves that courageous, subtle, and smart filmmaking about Hollywood is still possible—and still able to expose the rot at the core of the industry.