While there’s no such thing as a typical toddler, most say mama, dada and uh-oh when they’re testing the verbal waters. But not Eva Silverstein.

The Brooklyn-born dancer and co-founder and Artistic Director of the Silver-Brown Dance Company (SBD), apparently had something else in mind when she uttered her first word: bounce. The adults around her were likely stunned, but the message was clear. They needed to get the child moving. 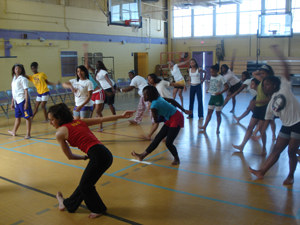 Nearly three decades later, Silverstein is still at it. But in addition to dancing, she and her company are using their skills to bolster the morale of low-income students in hurricane-ravished New Orleans. Beginning in April 2007, Silverstein and SBD initiated a three-week residency at Warren Easton High School—a school that was closed for more than a year following the storm—and taught 35 girls the choreography for a 30-minute dance program. The efforts of the five-person company—Matt Adams, Mary Glackmeyer, Pamela Jones-Goodenow, Nile Russell, and Silverstein—culminated in a packed performance in the school’s recently-rebuilt gymnasium.

“The kids were full of rambunctious energy and you could see that they needed a lot of attention,” says dancer Matt Adams. “Some of them had come back to New Orleans without their families. Most were staying in trailers. At times it was hard to take it all in. It made me think of where I was when I was in high school. I’d never experienced anything like what these students were going through, but they embraced us full heart right away.”

Pattie Payne, School Improvement Facilitator at Warren Easton, describes the two-week residency as “fantastic” and says it was a rare bright spot in an otherwise dreary landscape. What’s more, she continues, some of the girls were literally transformed by the intensive, focused activities.

Despite the fact that 22 months have passed since Katrina hit, scars are evident on both the city and the people who live there. The school cafeteria at Easton remains shuttered and parts of the building are still uninhabitable. “The school was closed for a full year,” Payne says. “We heard rumors after the storm that the building was going to be sold for condos. Alumni, teachers, community members, and current students were not going to allow that. The building may have had some structural difficulties, but it was built in 1913 and is a landmark in the mid-city.” 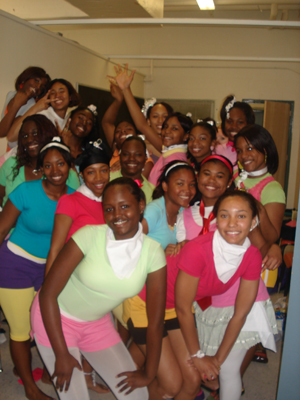 In February 2006, advocates learned that they’d won their battle to save the school and that Warren Easton would reopen in August 2006 as a charter program. It is one of only 56 of the district’s 128 schools to do so.

Still, when staff entered the school to assess the damage, they were shocked. “The third floor had six-to-seven inch puddles of water that had been standing for months and mold covered everything. We literally had to throw out every single thing in the building,” Payne says.

Indeed, what had to be tossed is staggering: 40,000 books, band instruments, $100,000 worth of athletic equipment, desks, computers. “Teachers had to throw away years of collected resources,” she continues. Yet they rebounded. FEMA, alongside neighborhood residents, parents, and Rotary Club volunteers from California and Pennsylvania, spent the summer removing mold and mildew and repainting classrooms and hallways; Warren Easton opened in early September.

It was, says Payne, something of a miracle. Also miraculous, she says, was a letter from Eva Silverstein and SBD offering to work with students. “I have no words to explain how we feel about this donation of time and effort. It was incredible. They were so open with the children. They were firm to give them structure, but they maintained the friendly attitude that is necessary whenever you’re teaching something new.” The impact was quickly visible to Payne and her colleagues. “A few of the shyest girls became more outgoing and confident. They blossomed. I feel as if they are all standing taller now,” she says.

The impetus for the project came to Silverstein in the days following Hurricane Katrina. Both of her parents have roots in the city and took Silverstein and her brother on annual family visits there. She reports being immediately smitten by what she calls the “mix of southern etiquette and down-home sass.”

“Most of my family was not in the hardest-hit Ninth Ward, but the storm was still terrifying,” Silverstein says. “We thought Great Uncle Danny, who is 91 and in a nursing home, was lost. Luckily, he wasn’t, but to me the most upsetting thing was not that our government was failing people, but that it was deserting them.”

Within weeks of Katrina, Silverstein and Marisa Beatty of WAX, a theatrical organization in Williamsburg, organized a fundraiser for the New Orleans’ Musicians Fund that netted a few thousand dollars.

Then, in early 2006, Silverstein traveled to the city for a cousin’s wedding. Nothing—not news articles or TV coverage—prepared her for what she encountered. “It was January and it was like nothing had been touched,” she says. “There were trees in people’s living rooms and debris in front of homes. The town felt like it had been ghosted. There was a sense of death everywhere. It was dismal. I looked around and asked myself what I could do. I knew that people needed houses, electricity, and jobs and I didn’t have these things to give them. I’m a dancer from Brooklyn, so I decided to do a Katrina Kids Tour, to dance for, and with, the kids in New Orleans.”

Company members, three of whom had never been to The Big Easy, were equally enthusiastic. Nonetheless, moving the company there, even short-term, was difficult. Among other things, there was the issue of money. While SDB receives funding from individual donors, foundations and corporations, finding the resources to take the company to Warren Easton High for three weeks of pro bono work required “begging, pleading and scraping,” says Silverstein.

Their efforts, which included cajoling a fraternity at Tulane University to loan them a sound system and moving the performance from the school auditorium to the gym because the auditorium had only one functioning light bulb—defied expectations and were greeted with cheers and ovations.

SBD’s goal, whether on Bourbon Street or in the company’s Dumbo studio, is to invite the largest possible audience to appreciate the power of movement. “I want folks to believe that dance is just as exciting, stimulating, enjoyable and social as going to a bar or to the movies on a Friday night,” Silverstein says.

The racially-mixed nine-year-old company celebrates freedom, she continues. “I try to create work that sends dancers flying around, as if there are no boundaries or barriers. I love daring partnering and throwing someone in the air. I want to show that we are a true community and that there is freedom in community.”

Brooklyn Borough President Marty Markowitz has recognized SBD for “outstanding achievement,” and the company has performed throughout the US and in Argentina, Canada, France and Israel. Critics have described them as “kinetically explosive” and “athletically bold.”

The Warren Easton students would probably not use such phrases to describe SBD, but would instead call company members fun, hard-working, dedicated, and energetic. Participants learned valuable lessons about both community building and dance, says school staffer Pattie Payne. Not surprisingly, they are enthusiastically awaiting Silver-Brown Dance’s encore residency this fall, if the company can raise enough money to return.

Contributions to defray the cost of SBD’S return to New Orleans can be sent to the Silver-Brown Dance Company, 11 Sterling Place #5C, Brooklyn, NY 11217.

from Waiting for the Waters to Rise

by Maryse Condé, translated from the French by Richard Philcox

Maryse Condé’s Waiting for the Waters to Rise begins in her native Guadeloupe but is ultimately a novel that centers on statelessness. The three characters at the novel’s heart—Babakar, Movar, and Fouad from Mali, Haiti, and Palestine respectively—are all migrants driven from their homelands. Condé is a master storyteller capable of traversing multiple countries with their own histories of colonialism and political violence so that we come to know each character more intimately and why the friendship they forge is so vital to their survival.