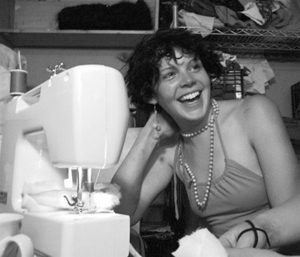 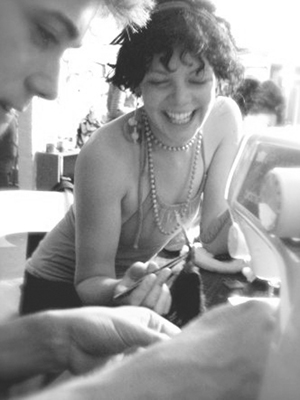 It’s after dark on a Tuesday night in Bed-Stuy, and a crowd is gathering in Kae Burke’s basement apartment. Actually, it’s less of an apartment and more of a complex: half living quarters, half workspace. This is a motley mix: local artists and 20-somethings, Victoria, the little kid from across the street, and a few of Burke’s chums, including Anya, her roommate and best friend. “Ready to sew?” she says, and everyone migrates to the art studio in the next room. There is work to be done.

This is one of many Tuesdays of Make Fun, Burke’s weekly, home-run project for anyone with the need or knack for crafting. Make Fun benefits the subversive Williamsburg artist as much as the Park Slope mom. The program is appealing not only for the artistic freedom it allows, but also for the variety of people it brings together to work in the same room. It’s okay to cut things up and get hot glue on the floor. “The kids love it. Kids come over and hang out all the time. They don’t have art at school and are very arts and crafts starved,” says 20-year-old Burke.

For the professional or pro-am artist, it’s also a haven. “Too many people have their private studios and they’re kind of boxed in,” says Burke, “but having a public studio is something more community-inspired.”

Free of charge and open to the public, Burke’s arts and crafts studio challenges consumerism and is a maverick in Brooklyn’s art community. If fashion is art and business, then Burke, as an anti-consumerist, is swimming against the current in her industry. By using found or donated materials, she has eliminated the need for payment, allowing participants to create whatever they can dream up—from simple T-shirts to sequined octopus costumes. Make Fun is a fashion business that flips the proverbial bird at both fashion and business. Burke likes the double entendre. “It’s Make Fun because you’re making something fun, but also making fun of everyone who wants to charge you money.”

Clothing is a kind of calling card to the world. It can denote a system of beliefs or lifestyle. And in many a social circle, like Burke’s, fashion is a form of protest. “You can use your clothing as your message. It’s a shout-out to anyone who agrees with you, or disagrees with you. You get to say something with what you wear, especially if you make it yourself.” In a sea of cookie-cutter khakis and popped collars, Burke’s DIY creations stand out.

The idea behind Make Fun came naturally. While still a student at Purchase College, Burke realized she needed her own studio. “I was always sewing until four in the morning and my roommate couldn’t have that, so I had to find another place to sew.” She sought refuge in an abandoned storage space in her school’s “student center,” which was really a shabby room with arcade games and a pool table.

“My friends would come over and hang out with me. I’d be making stuff and talking, and they would end up making stuff too and wondering how to sew things together,” she recalls. “They would have such amazing ideas but they wouldn’t know how to make it. They would have the inspiration but not the technique.” So Burke gave them pointers. Formal lessons weren’t necessary—these were people who just needed an initial prod in the right direction, and tips along the way. Whether adjusting a seam, patching holes, or re-threading the serger, Burke found that a little bit of her guidance went a long way.

In the spring of 2005, Burke transferred to the Fashion Institute of Technology in midtown Manhattan. The dorms were full and she was broke, but through a Craigslist ad she found a room in Bed-Stuy for $300 a month. Burke discovered her future home and Make Fun space by accident. “I got locked out of my apartment and I thought I could get to our yard through the basement next door.”

It was a happy accident. Formerly a reggae bar and dancehall, the cavernous basement was being used for storage by the Caribbean folks upstairs. Even though the rooms were cluttered with furniture, Burke was intrigued by its potential. “This place is huge!” she thought. After a negotiation with the landlord, she and her friend Anya won the basement apartment and began scavenging the streets for furniture and workspace materials.

Today, flanked by unassuming brownstones, Burke’s rainbow-colored, bare-bulb-lit rhapsody of a front door is hard to pass by unnoticed. Inside, the basement is an art project in constant flux. An old bathtub makes a fine sandbox, thick silver paper covers the bathroom walls in wavy patterns, and a bunk bed is turned into an art installation and then back into a bunk bed again. The work studio is the largest section of the apartment and is a cache of raw building materials, lined with old bookcases and bureaus overflowing with found or donated objects, supplies, finished projects, and half-finished projects. The back section of the studio is devoted to sewing. Bolts of fabric are stacked six feet high, and tables of machines line the adjacent wall. Any leftover space is filled with cardboard boxes of smaller scraps and every bauble imaginable.

“Clothing is public art,” Burke says, ruffling her head of raven curls. The clothes she designs and wears—and the clothes she helps others create—raise the bar beyond simply making a fashion statement.

By New York standards, Burke has plenty of room to work in, but she’s got bigger ideas than one basement can hold. “Make Fun is a smaller scale version of what I want to be doing for the rest of my life.” In the future, she says she wants to open a permanent public studio with a performance-related focus. “It would be a workshop with a sewing studio, a woodshop… fabrication resources across the board. I’d like to get theater groups involved, kids groups, and individual artists who want to do a public project.”

Burke wants to run a studio that would facilitate self-sufficiency for artists and other creative minds. And she hopes to eventually run more than one studio. “I want to hold onto the Bed-Stuy space, and have different satellites where people can come to their neighborhood arts and crafts house.”

By the end of the Make Fun night, rescued objects and bolts of unwanted fabric have been given new functions. Anya has begun work on flags for the Fancy Party Bike Parade she’s organizing. Little Victoria has sewn a pillow for herself and one for her doll too—she’s stuffed it to near bursting, but insists she prefers it that way. A teenage boy leaves with a beautiful new bird-print pocket for his jacket. Someone’s botched attempt at a red dress has been transformed into a skirt. Trash has been turned into treasure, everyone had a good time, and it didn’t cost anything. Kae Burke is pleased.

LIZ MAESTRI is a full-time dreamer who lives in Gowanus.